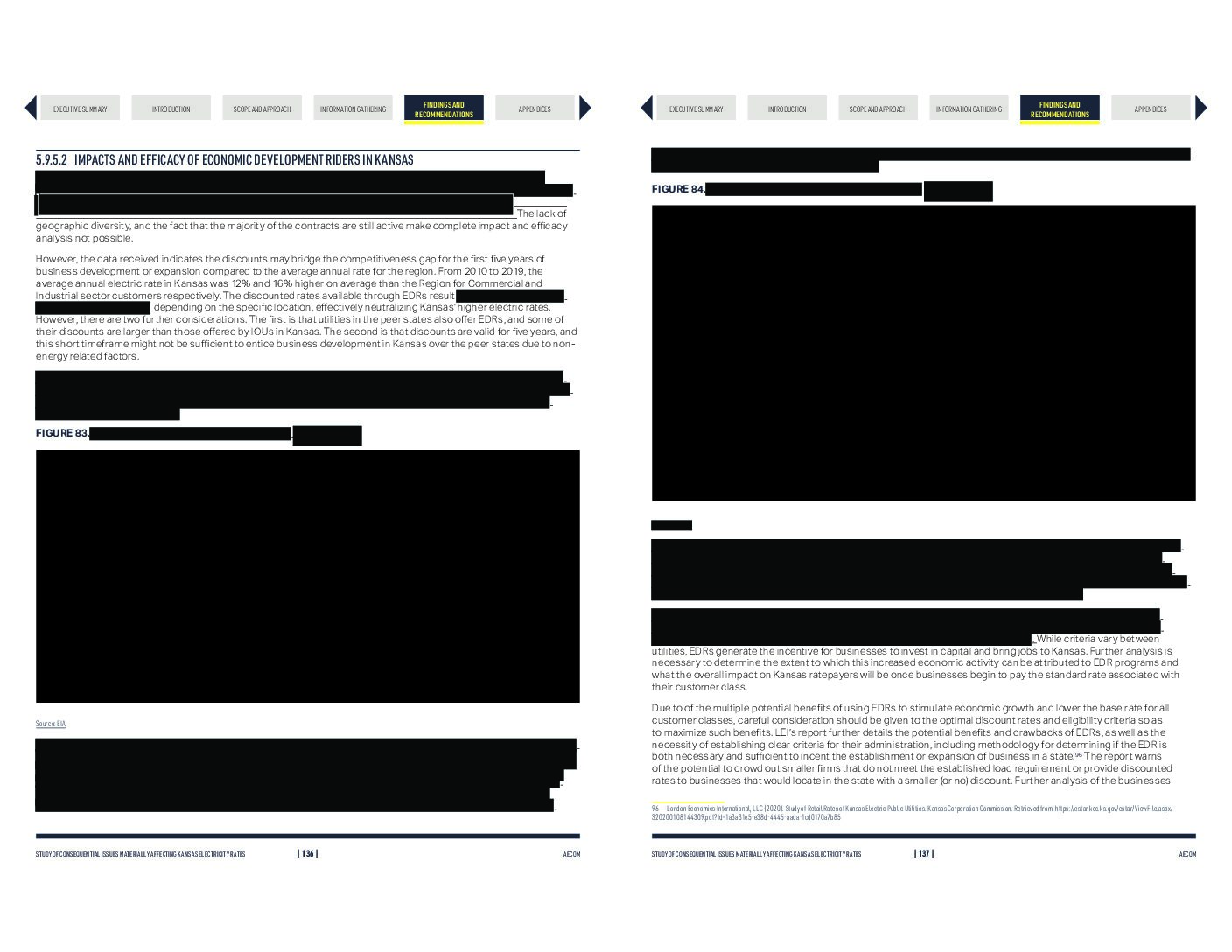 An example of heavily redacted pages from the electric rate study.

A public version of the report contains dozens of redactions, obscuring what went into some of the policy recommendations.

A report commissioned by the Kansas Legislature to help guide future energy policy decisions leaves the public in the dark on the rationale behind key recommendations, critics say.

A public version of the wide-ranging, state-funded report was released this month with dozens of redacted pages and sections, prompting questions and criticism from clean energy and utility customer advocates.

Among the more controversial conclusions for which the supporting information is redacted is a claim that rooftop solar costs more than the electricity utilities currently provide to residential customers.

“Most of the solar information has been redacted,” said Dorothy Barnett, executive director of the Kansas Climate & Energy Project. The only way she can see the entire unredacted report is to formally intervene in the matter, which she said she is now doing.

She’s not the only one upset about the secrecy. David Nickel, consumer counsel for the Citizens Utility Ratepayer Board, said the redactions are “not a little smidgeon here and there. It’s a large part of the report. And some of those elements go to form the basis of various recommendations.”

The Legislature, largely concerned about why the state’s electricity rates substantially exceed those in many neighboring states, in 2019 passed a bill to hire consultants to scrutinize many aspects of the state’s electricity industry and share the results in two publications. After some controversy over who to hire, a legislative council hired London Economics International to do a first phase and AECOM to do the second part, which was posted to the Kansas Corporation Commission website this month.

Jim Zakoura, a lawyer who represents industrial electricity customers in Kansas, estimates that nearly a fifth of the report has been blacked out, which he thinks is a violation of the state’s open records law. He has filed a motion with state regulators asking that many of the redacted passages be explained and restored.

It’s unclear who made decisions about what to redact from the public version of the report. A spokesperson for Evergy, the giant among Kansas’ 32 electric utilities, said the company routinely requests confidentiality in regulatory matters for information that is market sensitive or protects customer privacy. He would not say whether Evergy requested confidential treatment for this study.

AECOM, which produced the report, deferred questions to the Kansas Corporation Commission.

Kansas state Rep. Joe Seiwert, chair of the House committee on energy, utilities and telecommunication, said he hasn’t yet read the report but finds the extensive redactions disturbing.

“I’ve got concerns about it, no doubt,” he said. “There might be a legitimate reason. If so, I’d be interested in knowing what that is.”

The report’s level of secrecy is problematic for legislators in particular, Zakoura said, given that, “the legislature commissioned the study to get guidance and advice so they could pass statutes that would bring Kansas to regionally competitive electric rates.”

The degree of secrecy is unusual, as well, he said, given that “Kansas and most states err on the side of disclosure rather than on the side of confidentiality. The expectation is that there would be a very small amount that would be confidential, if anything.”

The first installment of the study, released in January, has no redactions, according to Zakoura.

A lawyer for the Kansas Corporation Commission filed a document Tuesday questioning “why some of the information contained in the Phase II Report was designated as confidential, as much of the confidentially designated material appeared to be in aggregate form that is otherwise obtainable in public records.”

The staff asked the consultant to review the report and explain its decisions to obscure some information “noting that the commission’s general rules … require parties claiming confidentiality to justify such designations.”