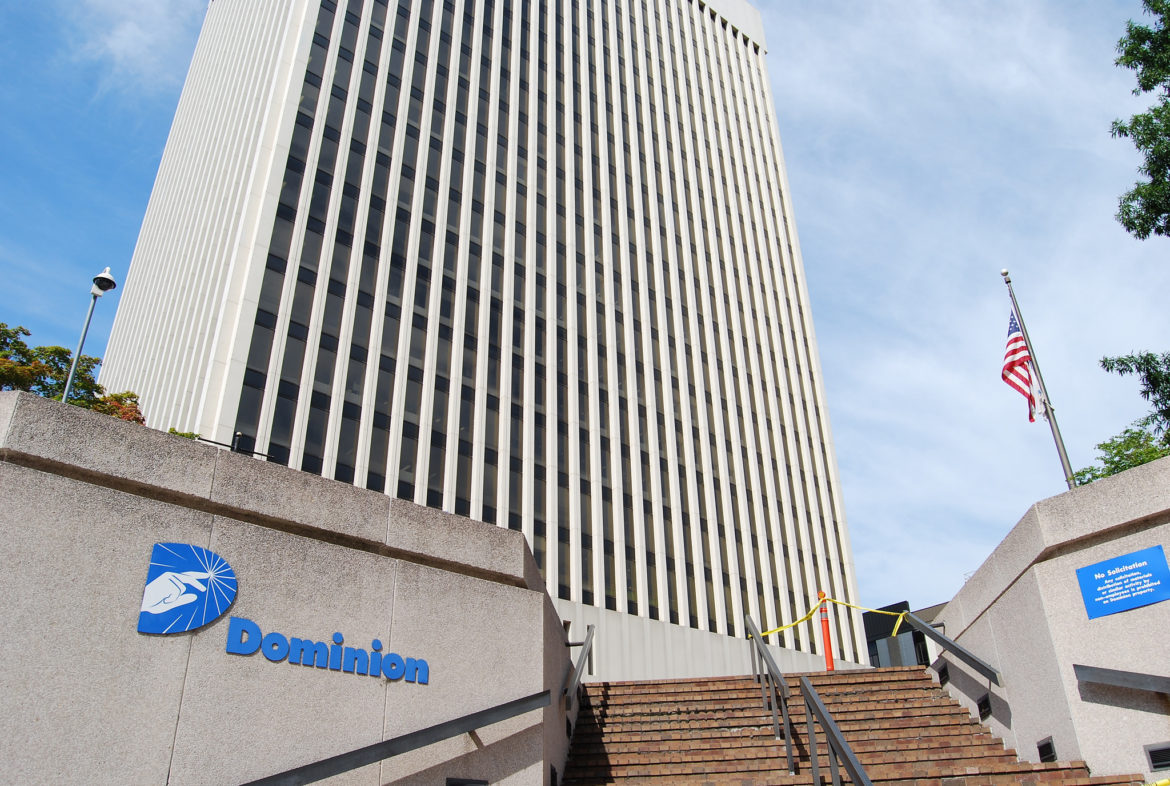 NRDC policy director Walton Shepherd says the utility over-relies on blockbuster projects that do more for its image and bottom line than for customers.

Walton Shepherd is elated that Dominion Energy opted to abandon the $8 billion Atlantic Coast Pipeline. But his praise isn’t as effusive as some, such as a recent Forbes article that gushed about the utility’s pivot to renewable energy.

As the Virginia policy director for the environmental nonprofit’s Climate and Clean Energy Program, Shepherd wants Dominion to reduce its carbon pollution by committing to heftier and permanent energy efficiency programs.

And while he doesn’t want to dismiss outright Dominion’s recent proposal to harvest and market what’s known as renewable natural gas from Virginia pig manure, he also doesn’t want customers to be further burdened by the $55 billion the utility is expected to invest into solar, wind and other low-carbon energy sources over the next 15 years.

A comprehensive Virginia law that took effect July 1 requires the state’s largest utility to switch to carbon-free electricity generation by 2045. Much smaller Appalachian Power must follow suit by 2050.

Shepherd joined NRDC six years ago after working on similar policies in his native West Virginia. He holds a law degree and an MBA from West Virginia University.

In this Q&A with the Energy News Network, he explains how Dominion can look out for both its shareholders and ratepayers and how the Virginia General Assembly should prod such action in its 2021 legislative session. The interview was conducted before Friday’s news that Dominion CEO Tom Farrell will step down in October amid a leadership shakeup. It’s been lightly edited for length and clarity.

Q: First, you said that Dominion “now heralds itself as a, ahem, ‘clean energy company.’” What’s the first step the utility needs to take for doubters to be assured that Dominion is intent on serving its Virginia ratepayers and not its shareholders?

A: Rather than over-relying on blockbuster, oversized and big tent projects like the Atlantic Coast Pipeline that provide windfalls for shareholders, Dominion can serve both its shareholders and ratepayers by right-sizing its business model. That company will be rewarded for a model that lowers its carbon pollution.

Q: Some of the billions that Dominion plans to invest in clean energy will evidently come from $10 billion Warren Buffett’s Berkshire Hathaway is reportedly paying to buy 7,700 miles of the utility’s long-haul gas pipelines. Some of that money will be invested into agriculture-derived gas projects to generate so-called renewable natural gas. Is that a wise environmental move?

A: Recapturing methane is certainly sensible; no one can argue against that. But it doesn’t make sense if it’s just another showy project done to generate splashy headlines and executed at the expense of meat and potatoes projects like energy efficiency. Why go to agriculture-powered methane when you could just go directly to making the grid more efficient? The order should be energy efficiency projects first, then go to methane recapture.

Q: You call Dominion a laggard on the energy efficiency front. A comprehensive report lays out those shortcomings, but what are the top three actions the utility could take immediately to show a commitment to shedding that label?

A: One, Dominion’s Integrated Resource Plan is now underway for the State Corporation Commission, the utility regulators. Dominion leaders should be embedding energy efficiency into that plan as a long-term foundational resource rather than the current begrudging, minimalist, box-checking exercise they feel they have to fulfill. The IRP is where the rubber meets the road.

Two, Dominion could abandon its long-term practice of imposing arbitrary budget caps on energy efficiency proposals that come before the State Corporation Commission. It limits the utility’s investment because it’s a self-imposed ceiling on common-sense programs.

Three, Dominion needs to jettison its kneejerk reaction to energy efficiency measures before the Virginia Legislature. Anytime the General Assembly tries to bring up energy efficiency, Dominion opposes it. They need to embrace it as a primary resource and know that they can still be a thriving company.

Q: Why weren’t those issues addressed in the energy efficiency portion of the Virginia Clean Economy Act, which took effect on July 1?

A: The VCEA makes huge advances on climate action, but on energy efficiency, it’s broader. Bluntly put, the annual target on what Dominion must deliver in kilowatt-hour savings beyond what they already do on savings for customers was watered down to nearly nothing. Dominion’s energy efficiency plans are modest. We’re just not there yet.

Q: Perhaps more legislation is necessary? What should the General Assembly focus on in its 2021 session?

A: It’s simple. To protect Virginians from excessive electric bills, the General Assembly can pencil in firm energy efficiency requirements that Dominion removed this year. One necessity is creating a permanent, annual energy efficiency benchmark for kilowatt-hours saved by customers. As it stands now, the benchmark hits a wall in 2025 because there are no requirements after that.

Q: Talk of decoupling can make electric utilities nervous because their traditional model is: the more kilowatt hours they sell to customers, the more money they make. How do you make your decoupling argument to Dominion?

A: In Virginia, we have the advantage of a rate case next year. And decoupling is related to adjusting rates to account for reductions in revenue because of energy efficiency. The 2021 rate case will serve as a reset to what Dominion is allowed to bring in from its customers and still be a reasonably attractive company to shareholders that’s worthy of investment.

Once those rates are reset, we can have a sensible baseline against which decoupling can account for any revenue reductions related to the success of energy efficiency. The timing is good for Dominion to consider decoupling.

Q: Now, let’s turn to Dominion’s decision this month to abandon the 600-mile Atlantic Coast Pipeline. Why do you think the company waited so long to pull the plug?

A: On the timing, I can’t speculate on their internal go and no-go deliberations. I would assume that despite headwinds from clean and sustainable energy they were lured by the fallacy of sunk costs as in, we’ve spent this much so surely we can’t stop now.

Q: Continuing with the pipeline, you’ve mentioned a flawed business model and shoddy planning and execution as chief among Dominion’s failings. Do you also think the company underestimated the resistance from everyday Virginians?

A: Dominion clearly underestimated the resistance of everyday Virginians who might have been more willing to host energy infrastructure that was truly needed. Need was the missing linchpin. But hosting a transparently unneeded project that served no identifiable entity other than Dominion and Duke Energy proved to be too much for Virginians.

Q: The pipeline seemed to fail tests on multiple levels. How do you sum up the lessons learned?

A: First and foremost, our laws worked as intended to protect people and their public resources.

It’s now clear that Dominion’s top-heavy approach to doing business with a marquee project to deliver a basic service is unsustainable. They’ve hit the outer limits of that model. Moving forward, it’s time to retool their approach with customer-sensitive policies. I’m hopeful that’s the lesson they’ll take away.

Q: You reference the term equitable clean energy. How do you define that?

A: It means reducing pollution from our power sector in a way that lowers the cost of energy for everybody across the board. We know we have the tools to do this; it is not landing men on the moon. And it doesn’t have to be outdated, top-heavy projects like the Atlantic Coast Pipeline. The goal is assuring low- and middle-income Virginia citizens are accounted for and protected so they are experiencing lower energy burdens.

Q: Your brief biography mentions that you once taught English. How did that help prepare you for your job today?

A: From 2006 to 2009, I was a high school English teacher at a boarding school in the northern Georgia mountains that served underprivileged youth.

We had no sustainability programs, so we did energy efficiency tweaks. Some of the low-hanging advances we made were basic, like not heating the pool year-round, insulating the pipes that heated the pool and changing light bulbs in the dorms. We’d have contests where the dorms would compete to see which students could change their behavior by using the least amount of hot water. It was all in fun.

Here we are a decade later and I’m doing the same things in Virginia. But now I’m doing it full time instead of in my spare time.