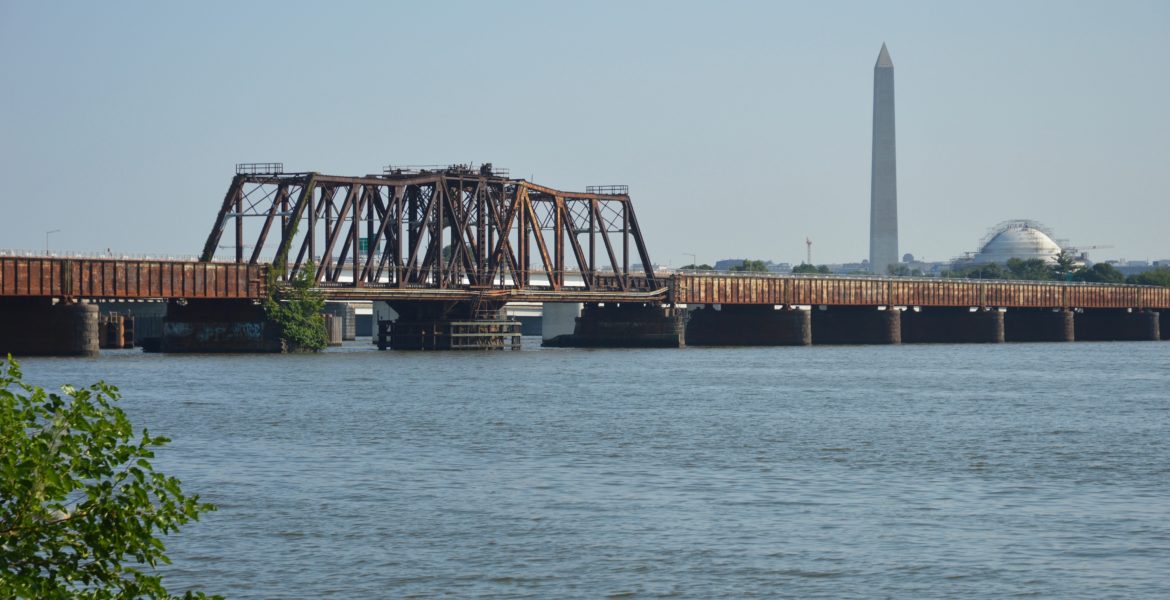 Long Bridge over the Potomac River connecting Virginia and Washington, D.C. with Washington Monument and Jefferson Memorial in background.

Expanding passenger rail service in the region is expected to annually eliminate tens of thousands of tons of emissions.

Pedestrians, riders on horseback and stagecoaches flocked to the Long Bridge after President Thomas Jefferson signed federal legislation allowing construction of a span across the Potomac River in 1808.

Now, yet another act of Congress is needed to double the volume of the latest iteration of what is now a two-track bridge — and a crushing chokepoint for commuter and freight train traffic in the nation’s capital. Federal legislation will enhance Virginia’s long-envisioned role as a rail linchpin in a greened-up transportation corridor connecting the Southeast with the Northeast.

It’s a crucial federal piece of a complicated eco-overhaul initiated by Virginia Gov. Ralph Northam, a Democrat. Briefly, it permits the National Park Service to transfer to Virginia and Washington, D.C., the land needed for the construction of a new rail bridge near the existing Long Bridge, as well as an adjacent pedestrian/cyclist bridge.

Virginia will own the new, separate $1.9 billion bridge linking the state with the District of Columbia. Its two tracks will be dedicated solely to passenger rail. Once a final plan is selected, a construction timeline once estimated at five years might be extended because the pandemic has slowed a once-booming economy. The existing 116-year-old steel truss bridge will continue to carry freight trains.

“This is so historic,” said Danny Plaugher, executive director of Virginians for High Speed Rail. “The current Long Bridge is such a pinch point because every single passenger train in Virginia, and most of the Southeast, goes over that bridge.

“To use a highway analogy, imagine Interstate 95 going from four lanes to two lanes and the backup that causes. That’s what is happening to our rail lines every single day.”

His nonprofit was founded by chambers of commerce in Richmond and the Hampton Roads region in 1994 to advocate for reliable rail service connecting the state to the entire East Coast.

Rail behemoth CSX Transportation owns the existing Long Bridge. Its current capacity is 76 daily trains — 18 for freight and 58 for passengers. That shared configuration has stymied expansion of both commuter and freight rail in a region intent on mitigating climate change and easing congestion by reducing truck and passenger vehicle traffic.

In Virginia alone, the transportation sector has long outpaced electric utilities on the emissions front, accounting for 45% of its heat-trapping gases.

The Long Bridge squeeze limited Amtrak to 24 trains daily in a pre-coronavirus world that was flush with travelers. With a new bridge, Amtrak could almost double that figure to 44. As well, Virginia Railway Express was hamstrung when the service wanted to almost triple its 34 daily commuter runs to and from the northern Virginia suburbs. Meanwhile, MARC, the Maryland Area Regional Commuter train, hadn’t ever been able to access Virginia.

Metrorail, a separate passenger rail entity that serves Virginia, Maryland and the District, is in a different situation with its own separate bridge across the Potomac.

“Long Bridge should have been expanded a long time ago,” Plaugher said. “But it’s complicated because the bridge isn’t in Virginia, but serves Virginia. We needed private entities, the federal government, the state and so many people at the table to make this happen.”

What’s referred to as Virginia’s rail renaissance was actually launched seven years ago when the General Assembly and Republican Gov. Robert McDonnell boldly began dedicating a portion of the state sales tax annually to a passenger rail fund.

After Northam announced a landmark pact to transform rail service and transit in Virginia in December, legislative leaders delved into the details of also unclogging roadways and spurring the economy. They unveiled an ambitious transportation package built upon the financial foundation established in 2013.

What emerged when the General Assembly session ended in March is an omnibus measure that will phase in new revenue and was projected to raise an additional $408 million annually by 2025 primarily via an increase in the state gas tax. Of that total, a record $147 million is designated for public transit and $55.5 million to rail.

Those numbers could well be in flux, at least temporarily, because of the statewide economic slowdown caused by COVID-19. Northam has called a special session beginning Aug. 18 to revisit the budget and address criminal and social justice reforms.

“We expect to see new numbers,” said Trip Pollard, a senior attorney with the Southern Environmental Law Center. “But when the economy is back on its feet, we will end up ahead of where we were.”

Another critical piece of the omnibus law passed earlier this year empowered Virginia to finally create a Virginia Passenger Rail Authority. That’s huge because the authority — to be led by a board of directors, many appointed by the governor — can buy and manage railways.

A separate body was needed to oversee projects of such magnitude, Pollard said.

Repurchasing, adding and improving sections of track included in Northam’s Rail Initiative — mostly between the District and Richmond — will cost as much as $1.8 billion. In the early 1990s, former Democratic Gov. Douglas Wilder sold what was known as the Richmond, Fredericksburg and Potomac railroad corridor to CSX Transportation.

“Virginia made the decision a long time ago to let freight rail run things,” said Pollard, who has focused on transportation and land issues at his nonprofit for 23 years. “Like a lot of the country, the state turned its back on passenger rail for decades.”

As enthusiasm for passenger rail has soared over the last several years, widening the Long Bridge’s bottleneck rose to the top of the to-do list.

“It became a poster child for outmoded infrastructure,” Pollard said, adding that price tag for replacing it was a major deterrent. “Laws of physics were proof that we couldn’t fit all the trains we needed across that bridge. But everything had to converge for anything to happen.”

Bridge ownership gives Virginia officials say-so to dictate whose trains use it and how often they do so.

As it stands now, the state of Virginia, local jurisdictions and the federal government will each cover a third of the bridge’s $1.9 billion cost. Final environmental reports, needed before construction can begin, are expected to be released this year.

The closest alternative to the Long Bridge is a railroad bridge across the Potomac in Harpers Ferry, West Virginia, 66 miles west of Washington.

While rail ridership has dropped precipitously as the threat of COVID-19 has kept commuters and other travelers at home, “we want to keep things moving while we are in the twilight zone,” Pollard said. “Although the pandemic has slowed momentum, the need to expand passenger and freight rail has not diminished.”

“It involves lots of pieces so we can’t stop,” Pollard said about forging ahead with bridge plans, ironing out details with CSX and creating the rail authority. “This is about the building blocks to clean up transportation.”

A decade ago, both Pollard and Plaugher were instrumental players in a bipartisan coalition that labored vigorously for what in 2013 became $50 million to $60 million in annual funding for passenger rail. The money came from the state sales tax.

“We were the first state in the nation with such dedicated funding,” Plaugher said, adding that because the General Assembly acted “we didn’t have to go hat in hand to beg for money.”

That money allowed Virginia to add Roanoke to the Lynchburg-Charlottesville-Washington Amtrak route for the first time in more than three decades. As well, Norfolk was added to the Richmond-Washington route.

Regional Amtrak ridership was on track to exceed 1 million this year for the first time, from 446,000 in 2009, Plaugher noted.

When COVID-19 is under control, he and others expect ridership numbers to continue on that trajectory.

“This is a health crisis, not a transit crisis,” Plaugher said. “Public transportation will rebound once people feel safe again. The time to do all of this infrastructure work is when ridership and traffic are down.”

Before March, Plaugher’s number-crunching estimated that Northam’s rail initiative would boost Amtrak service more than 50% by 2030 by adding 2.6 million passengers annually. He also figured it would prevent at least 43,000 metric tons of carbon pollution from being released by slicing 165 million passenger miles from Virginia’s roads each year.

Rail projects he and Pollard envision on the horizon are a Petersburg, Virginia, to North Carolina Amtrak route and an east-west passenger rail route linking Christiansburg and the New River Valley with Hampton Roads, through Roanoke, Lynchburg, Charlottesville and Richmond. The latter, dubbed the Commonwealth Corridor, has the potential each year to eliminate 37 million passenger miles and cut fuel consumption by 800,000 gallons.

“The era of the interstate expansion is over,” he said, adding that the 95-mile drive on Interstate 95 from his Richmond office to his boyhood home in Manassas is a draining three hours on any given Saturday. “The idea of going from four lanes to 12 is not feasible, possible or affordable.”

Plaugher laments the decades-ago sale of the Richmond, Fredericksburg, Potomac corridor decades ago, figuring it stamped out ideal destinations for high-speed rail in Richmond and the Hampton Roads region.

“We’re sad about that,” he said. “But history is always hindsight and we have to learn from that.”

For now, he is focused on what’s around the next bend.

“This is a big year and our opportunities are ahead of us. Citizens controlling their own transportation future is nothing to sneeze at.”