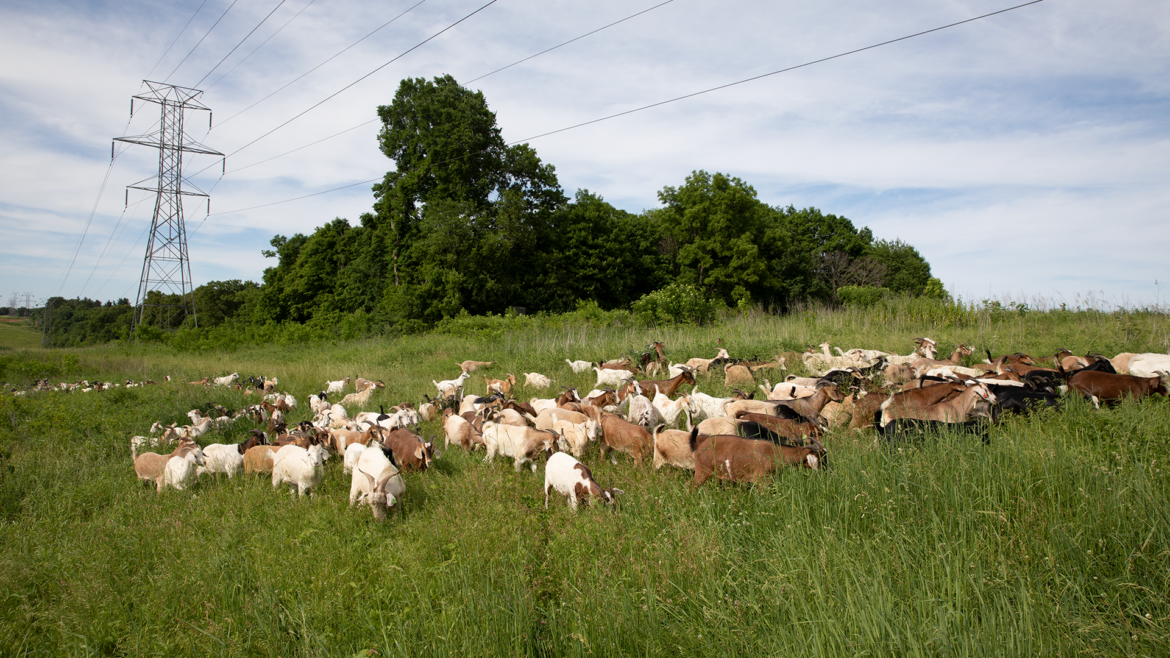 "Goats on the Go" help ComEd to clear overgrowth and minimize outages.

With the ongoing coronavirus pandemic, more people are working from home — placing more demand on residential electric service than ever. An outage under such circumstances is not only inconvenient; it can bring productive work to a halt.

Utility companies like Commonwealth Edison and Ameren Illinois employ a wide range of strategies to maintain grid uptime; protecting against hazards such as overgrown foliage and animal intrusions calls for some lower-tech solutions.

While storms in the Midwest and Northeast have recently knocked out power to millions of customers, in many parts of the country, squirrels are still a leading culprit for outages. The problem is so prevalent that the industry has developed its own acronym: POCBS, which stands for Power Outages Caused by Squirrels. American Public Power Association also maintains the Squirrel Index, which measures damage to the grid caused by squirrels and other animals.

Riley Adams, manager of electric initiatives and the Avian Protection Program for Ameren Illinois, explains: “Distribution substations have a big transformer inside that has power coming out of that. There are overhead lines that go to a pole outside the fence. And what we’ve seen in the past is squirrels will get on the pole outside the fence, and they will climb down the wires and go inside the substation and cause whatever mischief they are going to cause.”

Ameren Illinois has installed spinners on wires near transformers. When the squirrel encounters the spinners, it falls harmlessly onto the ground outside the fence, preventing damage to the transformer, and saving the squirrel from electrocution, Adams said.

Birds of prey represent a potential source of outages due to collision with wires. Likewise, because of their poor eyesight, swans often collide with power lines, which can also cause outages. To minimize this risk, Ameren Illinois has developed and installed covers for bushings that sit on top of transformers, along with retrofitting thousands of transformers to make them avian safe. Ameren Illinois has also installed flight diverters in areas with large concentrations of swans and birds of prey, according to Adams.

“We’ve got a plastic flight diverter that snaps on the line,” Adams said. “We’ll put 12 or 15 of those on a span. It has reflector tape on it and glow in the dark tape, and does two things. The reflective tape [allows] swans to see it from further away, and that gives them time to correct their flight path. The second thing it does is that the glow in the dark tape during the daytime is semi energy [absorbing]. At night, nighttime, it has a low-level glow; it’s reflecting light. At nighttime, [swans] can correct their flight plan.”

Since 2012, Ameren Illinois has installed about 180,000 protective covers on energized equipment such as switches and wiring. Ameren has also retrofitted 1,400 structures in areas with a high density of birds of prey, according to Brian Bretsch, communications executive for Ameren Illinois.

Commonwealth Edison also employs a number of similar strategies to minimize power disruptions from animals climbing poles, nesting and perching on power lines, or flying into them, according to Tom Dominguez, communications manager for ComEd. But plant life can also pose a destructive risk.

Trees and other vegetation caused about 22% of all electric service interruptions in 2019 for ComEd customers. Yet many times this vegetation is difficult to access, requiring hazardous climbing by utility crews. ComEd has been contracting with a service called Goats on the Go to clear overgrowth and minimize outages while reducing the risk of injury to crew workers. In areas under high voltage wires with steep terrain, using goats costs about half as much as using a human crew. The combination of goats and human crews to control vegetation has resulted in no tree-related outages in areas of dense vegetation for several years, according to Dominguez.

Ameren has also successfully used Goats on the Go to clear vegetation. Last November, the goats were able to clear an acre of overgrown vegetation in about a week — a job that would have taken a human crew several weeks, Bretsch said.

“The best thing about the goats is they’re very, very surefooted, and we were giving them basically a diet of everything they liked. They love the stuff that we don’t like,” including honeysuckle, poison ivy, and other dense brush, Bretsch said. “And what was great about watching these goats is they actually worked as a team. Some of the older goats would stand on their hind legs, and could stand up to almost about five feet, six feet tall. And they would bend over that bushy vegetation and stand on it so some of the younger goats can feed on it.”

Along with posing its own hazards, vegetation overgrowth is also a haven for wildlife such as raccoons, snakes and bees. On a recent job to clear tree limbs that posed a potential outage hazard in Alton, Illinois, the crew discovered a beehive. Rather than eradicate the bees, which are vital to the food chain, Ameren called in a local beekeeper to remove the hive and resettle the bees in a honey box on his property. After the story made the rounds within the company, several employees came forward to identify themselves as amateur beekeepers, which will make collecting future hives easier, Bretsch said.

“That’s how we found out we’ve got several employees who are amateur beekeepers, so we’ll just call on them,” Bretsch said. “To say that we’ll actually have beekeepers on staff, I doubt it just because they’re doing other roles in engineering or in our gas department. We’ll just kind of take it case by case.”