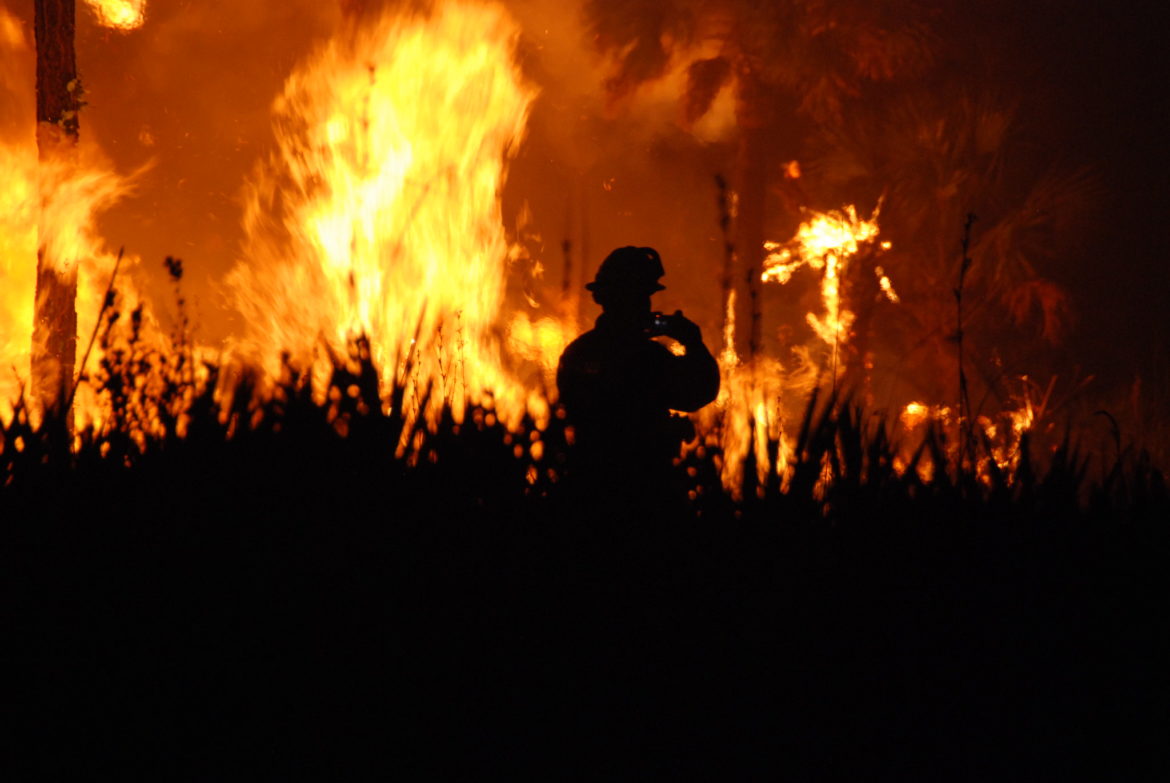 Mindful of PG&E’s struggles in California, Xcel Energy and electrical cooperatives are stepping up efforts to minimize the risk of causing wildfires.

As smoke from the California wildfires drifted eastward this summer, Holy Cross Energy CEO Bryan Hannegan had worries of his own in Colorado. In August, the hottest ever in Colorado, a fire called Grizzly Creek growled and then charged several communities in the middle of his service territory along a 100-mile segment of Interstate 70 that includes the resort communities of Vail and Aspen.

But it was the fire that didn’t happen that will worry him even after snowstorms arrive. What if the wires and other electrical infrastructure of Holy Cross Energy had started a fire? Despite all of Holy Cross’ planning and policies, including extensive efforts to prevent its equipment from starting fires, one wildfire in the wrong place could cause liability that would take down the electrical cooperative.

“I can’t speak for them, but I would venture to guess that every utility in the state, regardless of size, is worried about the potential for wildfire,” Hannegan said.

Utilities have always worried about wildfire at some level, but those concerns and the responses have elevated significantly as fires have ravaged California several times since 2017. Pivotal was California’s 2018 Camp Fire. The fire at Paradise killed at least 86 people and caused the bankruptcy of Pacific Gas and Electric.

“I think that scares anybody who is involved in any utility,” said Geoff Hier, director of government relations for the Colorado Rural Electric Association, a trade group of Colorado’s 22 electrical cooperatives.

Climate change also figures prominently in the thinking of utilities along with the mosaic of conditions that have created greater risk for both wildfires and damages. Fires were successfully suppressed for much of the 20th century, delaying the inevitable. And Colorado, higher and wetter than many places, was less vulnerable.

Then came the 21st century. The Colorado Department of Public Safety’s 2020 Wildfire Preparedness Plan reports the average of 8,170 acres burned annually in the 1960s had doubled by the 1990s, then doubled again. Entering this year, the top 20 wildfires had all occurred since 2000. Fires this year in Colorado, like those in California, have made those statistics obsolete.

Wildfire risks will almost certainly worsen. The Fourth National Climate Assessment published in 2018 projected the annual area burned in the contiguous western United States will increase 200% to 300% by mid-century. In a sense, this year’s fires are merely a warm-up act. And this year’s hot summer will, in the future, be considered cool.

People have also been rapidly moving into the foothills of Colorado and other areas called the wildland-urban interface, an average increase of 2.5% annually from 1990 to 2010, according to a study conducted by Silvis Lab. As of 2017, half of all Coloradans lived in areas at risk to wildfires, the Colorado State Forest Service reported in 2018.

Electrical lines and other equipment cause fewer than 2% of all wildfires, according to Steve Rohlwing, manager of asset risk management for Xcel Energy, Colorado’s largest electrical utility. In a filing with the Colorado Public Utilities Commission in July, Rohlwing said Xcel is aware of 14 wildfires at or near the company facilities. None were among Colorado’s 10 largest.

But if the probability is low, the consequences can be high — as was horrifically illustrated in California’s Camp Fire in November 2018. That fire was caused by the wind-whipped wires of Pacific Gas & Electric and sent the utility into bankruptcy in expectation of $30 billion in wildfire-associated liabilities.

“Wildfire risk has taken on increased prominence across the industry in recent years as many factors have contributed to increased wildfire impacts in the U.S., including changing climate conditions and increased development in high-fire-threat areas, and as a result of several highly publicized tragedies in California,” said Brooke Trammell, Xcel’s regional vice president for rates and regulatory affairs, in testimony before the Public Utilities Commission.

Xcel stepped up its fire-mitigation program after California’s fires in 2017 destroyed 10,280 buildings, forced 230,000 people to evacuate, and killed 45 civilians and two firefighters. The damage was estimated to be excess of $18 billion. The Wall Street Journal later reported that at least 17 major wildfires that year in California were linked to Pacific Gas & Electric.

Modeling by Xcel revealed potential in Colorado for its electrical infrastructure causing a wildfire resulting in $2.6 billion in impacts in 1% of cases. That’s akin to a 100-year flood. After the planned mitigation, the risk falls to $1 billion.

The utility says 2,100 miles of its overhead distribution feeder lines in its service territory and 2,900 miles of transmission lines are within the wildfire risk zone that was developed by the Colorado State Forest Service. Its goal has been to “harden” the electrical delivery system and revise operations to reduce risk by increased use of tools such as infrared inspection to identify thermal “hot spots” with priority in high wildfire risk areas, LIDAR technology and drones to provide detailed pole-top inspections.

By the following June, the company had assembled a wildfire mitigation team to explore what types of additional or accelerated projects could further mitigate the risk of utility-caused ignitions. Xcel spent $10.7 million in 2019 while inspecting 2,900 miles of transmission lines and replacing 2,305 distribution wood poles among the 67,162 it inspected.

In its filings, Xcel identifies $590 million in wildfire mitigation programs from 2019 through 2025. At least some of these costs it seeks to recover through additional revenue via a rider on customer charge. If approved by the Public Utilities Commission, a typical residential electricity customer’s bill would increase by 49 cents a month, to $69.53, Xcel says on its website. The rider would be adjusted during the next four years.

Colorado’s electrical cooperatives have also stepped up their efforts to prevent electricity-sparked wildfires and prevent damage from other wildfires to electrical equipment.

United Power began creating its wildfire mitigation plan in 2012. Bryant Robbins, the interim general manager, said directors concluded that the greatest financial risk facing the cooperative was a fire in the mountains, and one specifically started by the utility’s facilities.

A fire two years before in foothills west of Boulder, just outside of United’s service territory, caused damage, including 172 burned structures, valued at $660 million. It was the most destructive wildfire to that time in Colorado. Fires along the Front Range in 2012 killed three people and also racked up $568 million in property damage.

“We began to see some of those damage amounts,” said Robbins, then the manager of United’s mountain division. “We did not want to be the source under any circumstance, negligence or not, of any fire,” he added.

United has 5,700 meters in the forested foothills of the Rocky Mountains among its 96,100 meters.

To mitigate risk, the cooperative in 2012 expanded the crews assigned to trimming trees in the rights-of-way of electrical lines from one to six and expanded other mitigation efforts.

Wind gusts in the mountains of up to 120 mph are dangerous enough that United Power put one sub-transmission 34.5-kilovolt line underground. United is also encouraging its new members to put distribution lines underground, an expensive ask at about $1 million a mile on the flats without heavy rock. In mountainous areas, it can run $20 a million a mile. But those lines are much more resistant to fires.

Like other utilities, United has changed construction standards. “We no longer install any kind of porcelain insulators and replace existing ones, when possible,” Robbins said. The porcelain insulators, he explained, are vulnerable to lightning strikes.

Despite all this, United feels vulnerable. “Insurance companies not wanting to insure utilities in case of fire — that is the biggest issue we’re running into,” Robbins said. “Three years ago we had $100 million of general liability insurance that would cover United Power’s negligence as an ignition source, to handle claims. That got reduced to $75 million last year and then this year $45 million. We’re hoping that Colorado will enact legislation this coming session that will mitigate that issue. We feel this is mostly the direct result of the claims they had to pay out in California.”

For United, Holy Cross and other utilities operating in forested areas, getting access to rights of way to remove trees has been problematic at times. Many property owners want and expect the electricity but they want their trees, too. Further complexity comes from federal administration of 36% of Colorado’s lands. Utility managers complain the agencies can be slow to approve vegetation removal.

Tom Walch, chief executive of Grand Valley Power, is concerned about the potential for a fire on Grand Mesa, east of Grand Junction. There, he worries about liability and the need to step up the removal of trees in rights of way. Part of that challenge is across federal lands, he said.

Walch said fires of recent years, particularly those in California, have raised awareness of the potential for trees and electrical lines coming into contact. Before, he said, a common sentiment was “don’t cut down our trees, don’t mess with our forest. We love it here.”

“The disastrous fires in California a couple of years ago really brought more people around to understanding that utilities had to have the right to control the right of way if they were going to be required to maintain service in these forested areas,” Walch said.

Electrical cooperatives in Colorado want state legislators to specify best practices for vegetative management in rights of way and a process for clarifying the liability of utilities if those best practices are maintained. The Colorado Rural Electric Association is working with Xcel and Black Hills Energy, Colorado’s second investor-owned utility, as well as the municipal utilities, to formulate a uniform position. It is also working with the National Rural Electric Cooperative Association to address rights of way issues at the federal level.

The cooperatives want more: a backstop authority, funded partly by the state and partly by the utilities. The goal is to provide additional financial resources to help cover fire-related liability for any one utility that would otherwise drag them into bankruptcy — if the utility had taken all feasible steps to reduce the risk of fire from its system. California has adopted such an approach. But Colorado’s coronavirus-induced financial distress has put that conversation on hold.

At Holy Cross, Hannegan was thinking about wildfire risk when he became chief executive in 2017. He had a personal reason to do so. When he was in his 20s, a wildfire caused by utility equipment incinerated half of the 10 homes on the block in California where Hannegan’s family lived. The Hannegan house — where his parents still live — was severely damaged.

“If not for the grace of God, the house where my parents live to this day would have been gone,” he said.

A wildfire in July 2018 delivered a harsh reminder of the need for preparedness. It was caused by target shooters, not the utility, but Aspen very nearly lost electricity. A fire was beginning to lick up a wooden pole holding the third and last transmission line into Aspen when a quick-thinking utility employee arrived and extinguished the blaze.

After that, Holy Cross redoubled efforts to reduce vulnerability to wildfires, using the tools of United, Xcel and other utilities. The task, Hannegan said, is to find failures before they happen. “When things do fail, as they inevitably will, will they fail in a way that substantially reduces the potential for sparks or something else that could increase risks of wildfire?”

But even as utilities get smarter and more diligent about reducing the risk of wildfire, the threat of a catastrophic fire continues to rise, the result of a climate becoming hotter and drier.

“My biggest fear is that it will still not be enough because the risk is so great,” Hannegan said. “This is not something that will go away in a year or two. This is a long-term trend that we have to factor into our business operations.”