Photo By
National Institutes of Health 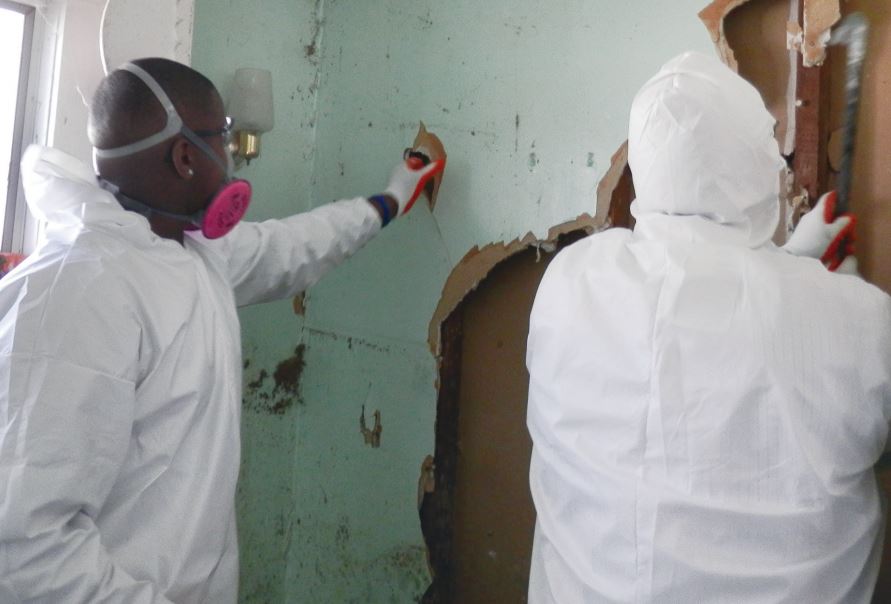 Costly removal of mold and asbestos can be a barrier to updating home insulation.

State leaders are looking for funding sources for remediation work that needs to happen before many energy efficiency upgrades can be completed.

But nearly a third of those customers are not able to weatherize their houses or apartments, and lose out on energy savings. That’s because mold, asbestos, and other health hazards discovered in their homes must be cleaned up before contractors can safely seal the space, an undertaking that easily runs into the thousands of dollars.

Those costs are not covered by the state’s efficiency programs. And very few of Wyatt’s customers can afford to pay themselves.

“Typically, 30% of the income-eligible customers will have these barriers,” said Wyatt, whose company, Home Comfort Practice, is based in Stratford. “Very few will go through with remediation. That’s been the issue.”

It’s a difficult problem that has hampered the state’s residential energy efficiency programs for years and prevents the most money-strapped households from obtaining services that could significantly reduce their energy bills.

Eversource and United Illuminating, which administer the efficiency programs, say about 10-14% of their market-rate customers have a health and safety barrier in their homes; that percentage rises to 25-30% among low-income households.

The barriers make it nearly impossible for the utilities to reach the weatherization target set by legislation: weatherize 80% of Connecticut residences by 2030.

To date, little has been done to deal with the barriers in any sustained way. But that may be changing. Last month, the state Department of Energy and Environmental Protection (DEEP), which oversees the ratepayer-funded efficiency programs, opened a proceeding on equitable energy efficiency. On the agenda is an exploration of funding sources for remediating health and safety barriers.

And on November 18, DEEP and the board that advises the state’s efficiency programs will co-host a workshop on weatherization barriers and possible resources for dealing with them.

“It’s very important to me that we change how we deal with these households that are not being served,” said Amy McLean, chair of the board’s residential subcommittee and Connecticut director at the Acadia Center, a clean energy advocacy organization. “We’re going to bring together stakeholders from all the different areas that serve residential customers — energy, housing, health — and identify some pots of money that are used separately that we might coordinate with.”

McLean is drawing on past experience. In 2010, she was part of a team at the Connecticut Children’s Medical Center that helped develop a program to remove health barriers to weatherization. Funded with a $3 million grant from the Department of Energy, the so-called Connecticut Efficient and Healthy Homes Initiative used a collaborative approach with utilities and public health agencies to identify barriers, remediate them, and follow through with efficiency measures.

“When the money ran out, the coordination stopped,” McLean said. “We’re bringing all those stakeholders back to the table.”

Connecticut Children’s may again be a key partner. The center has a HUD-funded Healthy Homes Program that is focused on remediating lead paint hazards in homes — since 2003, they’ve made more than 3,100 housing units lead safe. A limited share of those HUD funds can be used for supplemental remediation work, said Christopher Corcoran, the project manager.

But more promisingly, the program was recently awarded nearly $5 million in grant funding from the Department of Housing which may be used just for mold, moisture and asbestos remediation, regardless of whether lead is present.

“We have $5 million of bond money to remediate health and safety hazards,” Cocoran said. “If the weatherization programs said, we want to make X number of units safe and healthy, I’d say, that’s great — let’s do it.”

Sustaining such funding is difficult, given the high cost of these home repairs. A few years ago Eversource and United Illuminating obtained a $1.5 million grant to put toward resolving home health barriers. The money covered remediation work at about 50 homes. Remediation costs averaged around $6,400 for asbestos, $11,000 for mold, and considerably more for multiple hazards, said Jane Lano, manager of conservation and load management for United Illuminating.

“The scope of the problem is significant,” Lano said. “We’ve identified grants over the years, but we haven’t identified a sustainable source of capital to address these challenges.”

The fact that many low-income ratepayers are renters makes the situation even more challenging, as many landlords have no interest in paying for remediation, Lano said. The Connecticut Green Bank does offer remediation financing for multifamily properties of at least five units, but participation has been minimal, she said.

“It’s difficult to convince a landlord to make an investment that is not going to immediately monetarily benefit them,” Lano said.

A year ago, at the utilities’ request, the Green Bank also began to make low-interest financing available for homeowners to pay for up to $25,000 in mold and asbestos removal. The loans require that the borrower commit to completing weatherization after the work is done. So far, just nine loans have closed, according to Kerry O’Neill, chief executive officer of Inclusive Prosperity Capital, which administers the green bank’s Smart-E Loan program.

“Financing is not going to be the right solution for everyone, especially deeply low-income customers,” O’Neill said. “DEEP should be looking at different solutions for different market segments.”

The utilities have proposed expanding their on-bill financing programs, typically used to cover the cost of insulation and heat pump installation, to cover health and safety barriers. Customers qualify for the 0% financing as long as they’ve remained current on their electric bill; loan amounts range from $500 to $3000.

That would provide another financing option, although “it probably would not help many of the low-income customers that we’re talking about,” acknowledged Ron Araujo, manager of energy efficiency at Eversource.

Brenda Watson, executive director of Operation Fuel, which provides emergency energy bill assistance, agrees with McLean that better coordination among state agencies and the utilities is critical. A newly appointed member of the energy efficiency board, Watson said she believes the state is missing at least two fairly obvious opportunities to mitigate the need.

First, she said, the state is not fully utilizing the portion of Low Income Home Energy Assistance Program (known as LIHEAP) funds that can be put toward health and safety barriers. That federal program, administered through the state Department of Social Services, is funded at between $80 and $90 million a year, she said.

And second, she said, the state should set up a watchdog of some sort to hold landlords to account, especially those who live out of state and profit from rental properties in Connecticut while ignoring dangerous conditions like mold.

“Those landlords who are making a lot of money but not correcting blighted conditions should face a lot of fines,” Watson said. “They are working against the state’s climate change goals.”