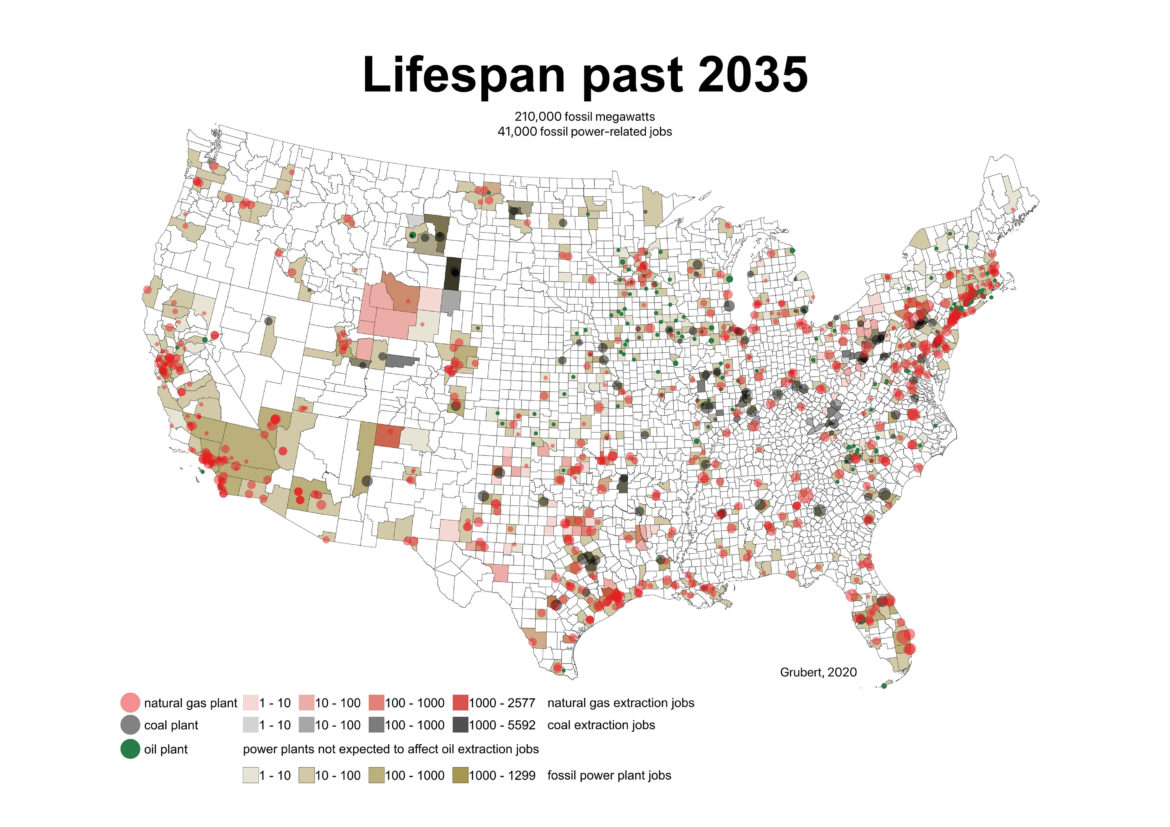 This map shows the locations of electricity-generating facilities with projected lifespans that extend beyond 2035.

Fossil fuel plants with nearly three-fourths of current generating capacity will reach the end of their typical lifespan by 2035.

Most of the United States’ existing fossil fuel power plant capacity will reach the end of its typical lifespan by 2035, according to new research published this week in Science.

Findings of the Dec. 4 study suggest that a deadline to decarbonize electricity by then will cost less than previously expected. The study follows on the heels of an October report from the Applied Economics Clinic and the Institute for Energy Economics and Financial Analysis that found the risks of investing in natural gas plants in the PJM grid region likely outweigh the financial rewards.

“What this work shows is that it’s probably not going to be a massive problem” to shut down remaining fossil fuel-fired electricity generation, said Emily Grubert, a civil engineer at Georgia Tech and author of the study in Science. Her work focuses on infrastructure engineering and sustainable communities. “Basically, the plants are already pretty old and this gives us a huge leg up in trying to retire carbon-based infrastructure.”

From a planning perspective, that means states and utilities can probably worry less about the economics of closing down plants early, Grubert said.

Compensation for stranded assets can come into play when “somebody builds something in good faith and then policy or some other occurrence forces it to shut down much, much earlier than expected,” Grubert said. Some plant owners might argue that they would still have outstanding debts or lose income they had reasonably expected.

“There’s a lot of arguments that maybe the newer fossil fuel assets should never be considered stranded assets, because it’s been fairly clear that there’s going to be climate action at some point,” Grubert said.

“There’s quite a bit of both existing and proposed fossil generation by utilities in poorer states,” Grubert noted.

In Grubert’s view, long-range policy planning should begin now to support people who will eventually lose their jobs, as well as communities that may have relied on revenues from fossil fuel power plants. At the same time, other people and other businesses are also affected by climate change impacts, she noted. They include communities affected by sea-level rise, shifts in extreme weather, disproportionate health impacts, and so on.

In light of that, she personally favors universal programs to benefit large numbers of people. “I think you’d be likely to garner a lot more political support for something that helps everyone,” Grubert said.

“This is a powerful result showing that a rapid fossil fuel phase-out is possible without undue financial implications,” Wamsted said.

One potential weakness, he said, is that the study assumed a high degree of national planning. “Given the incredibly disparate nature of the electricity sector in the U.S., this may be difficult to accomplish.” Policies and regulation take place at both the federal and state level, and there is wide variation among the states. There are also different market structures and regional grids with different market rules as well.

Some companies and states are almost certain to shut down fossil fuel plants faster than others, Wamsted added. For example, Vistra announced in September that it plans to retire 6.8 gigawatts of coal capacity by 2027, so it could better participate in the shift to renewables and battery storage. Its planned coal plant closures in Ohio include the Miami Fort Power Plant in North Bend and the Zimmer Power plant in Moscow.

“Similarly, other companies that see the writing on the wall and want to get ahead of the transition instead of sitting around waiting could also decide to move early,” Wamsted said.

The takeaway from IEEFA and the Applied Economics Clinic’s report is that investors putting money into a new fossil fuel project in the PJM market today “must understand that their investment is likely to end up stranded well before the end of that asset’s expected economic lifetime,” Wamsted said.

“Further, we would not expect investors in these plants to be compensated if indeed these new plants are forced to close early,” he continued. “Since the transition away from fossil fuels is well underway already, investor claims for compensation due to charged circumstances or policy clearly would not be justified.”