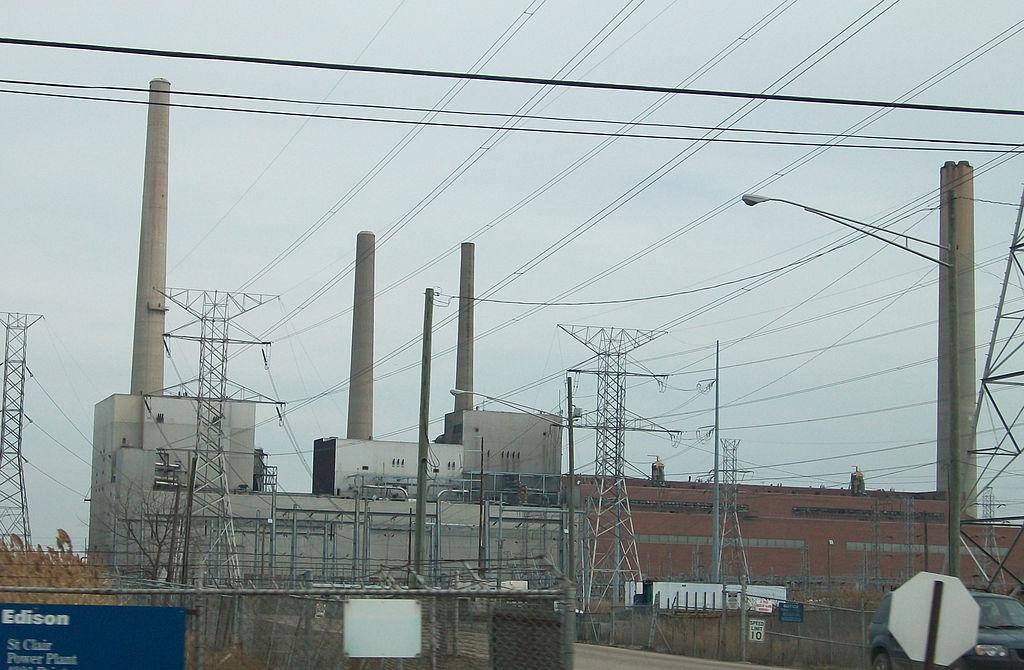 DTE's St. Clair power plant, which the utility plans to retire by 2022 and replace with a gas-fired plant.

A Sierra Club lawsuit is seeking to stop DTE Energy from replacing a coal plant with a gas-fired unit in a county where ozone pollution already exceeds federal limits.

A community north of Detroit with some of Michigan’s worst air pollution will see some relief when DTE Energy retires a coal-fired power plant there in 2022.

But a plan to replace the facility with a gas-fired plant will deny St. Clair County residents a more meaningful reduction in hazardous ozone pollution linked to asthma and other respiratory conditions, environmental activists say.

Judy Lindberg, a retired nurse and member of a local Sierra Club committee, said she regularly saw intensive care unit patients, especially kids, whose symptoms could be attributed to air pollution. While DTE’s plan reduces overall emissions, she doesn’t think it should be allowed to add a major new source in an area where pollution already exceeds federal air quality standards.

“Anything that adds to air pollution is something that I want mitigated,” said Lindberg, who lives about 6 miles south of the planned gas plant. From her property, she can see a Shell Oil processing plant across the St. Clair River in Sania, Ontario, part of an area dubbed Canada’s “Chemical Valley.”

A pair of DTE coal plants along with factories on both sides of the river have put St. Clair County in a U.S. EPA “non-attainment zone” where sulfur dioxide and ozone — a mix of nitrogen oxides and volatile organic compounds — exceed federal air quality standards.

The Sierra Club and Great Lakes Environmental Law Center have sued DTE and the state over the approval of air pollution permits for DTE’s gas plant, and a panel of appeals court judges last month sided with the environmental groups in ordering the utility to conduct more air monitoring before construction begins.

Many in the community support the project, citing the job and tax revenue benefits — DTE is St. Clair County’s largest taxpayer, accounting for about 13% of the tax base in a county where per capita income is around $31,000. The invisible nature of the pollution also makes it harder to galvanize opposition.

“You can breathe the air, so it’s hard to convince some people there’s a problem,” Lindberg said.

The company’s own data shows that the new gas plant would emit up to 266 tons of nitrogen oxides annually, as well as high levels of volatile organic compounds and other pollutants that combine to form ozone.

Ozone is a lung irritant that causes asthma, inflamed airways, chest pain, coughing, wheezing and shortness of breath, according to the EPA. Data shows that communities with high levels of ozone also have higher instances of emergency room trips for asthma and other lung diseases. It has also been linked to cardiovascular disease.

Lindberg regularly hikes nearby paths and doesn’t notice an acrid smell in the air, though she said others do. But the region isn’t full of “big clouds of black smoke,” which she thinks might provide some with a false sense of security.

Martin Habalewsky, a Port Huron resident who is part of the Blue Water Committee and who regularly golfs and hikes near the coal power plants, said he suspects economics drives the indifference that many in the area feel toward the pollution. St. Clair County is a “company town” in which DTE has employed generations of local residents, he added.

That sentiment was echoed by St. Clair County Commissioner Jeff Bohm, who represents the district in which the new plant is being built and will provide 35 new permanent jobs.

“DTE employs a lot of people and has fed a lot of families in this area for a long time, and hopefully they feed them for another 100 years,” Bohm said.

Regulators will always continue to “move the goalposts” by creating new standards, he added. He also dismissed the Sierra Club’s concerns: “They’re never going to be happy.”

DTE also plans to close another nearby coal plant in 10 years, Bohm noted, and he applauded the drop in air pollution that the new gas plant will achieve.

Sierra Club Attorney Elena Saxenhouse said the larger context of how the plant was approved has to be considered. Looking at it only in terms of a gas plant replacing a coal plant is “false framing,” she said.

The Sierra Club’s lawsuit has the potential to delay or possibly derail the plant, which is already under construction. Sierra Club and Great Lakes Environmental Law Center attorneys argue that state regulators from the Michigan Department of Environment, Great Lakes, and Energy should have required DTE to measure existing ambient ozone pollution levels, as state rules require if a plant is going to emit more than 100 tons of nitrogen oxides.

“By not requiring DTE to submit data regarding existing ozone concentrations, EGLE essentially ignored the fact that ozone pollution in the area is already above the applicable standard,” Great Lakes Environmental Law Center attorney Nick Leonard said in an email.

DTE and the Department of Environment, Great Lakes, and Energy have said the state was justified in giving the company an exemption on conducting the study because they claim that the new plant’s ozone impact will be minimal.

“DTE believes that the Blue Water Energy Center’s air permit granted by the Michigan Department of Environment, Great Lakes and Energy was properly approved under state and federal regulations,” DTE spokesperson Eric Younan said in an email. “DTE supplied sufficient and accurate data and analysis that supports the appropriate issuance of the permit.”

An appeals court agreed with Leonard and the Sierra Club in January, though the state and DTE have asked it to reconsider.

In the meantime, Habalewsky said he and Lindberg are working with their local committee and national Sierra Club chapter to push for clean energy and oppose the “dangerous, dirty” gas plant.

“Building out new fracked gas infrastructure would lock the country into a fossil fuel commitment for decades to come, with devastating consequences for our communities, like East China, Michigan, and the climate,” Habalewsky said. “We can’t let that happen, which is why we’ve launched a comprehensive effort to stop this buildout and end our reliance on fracked gas.”