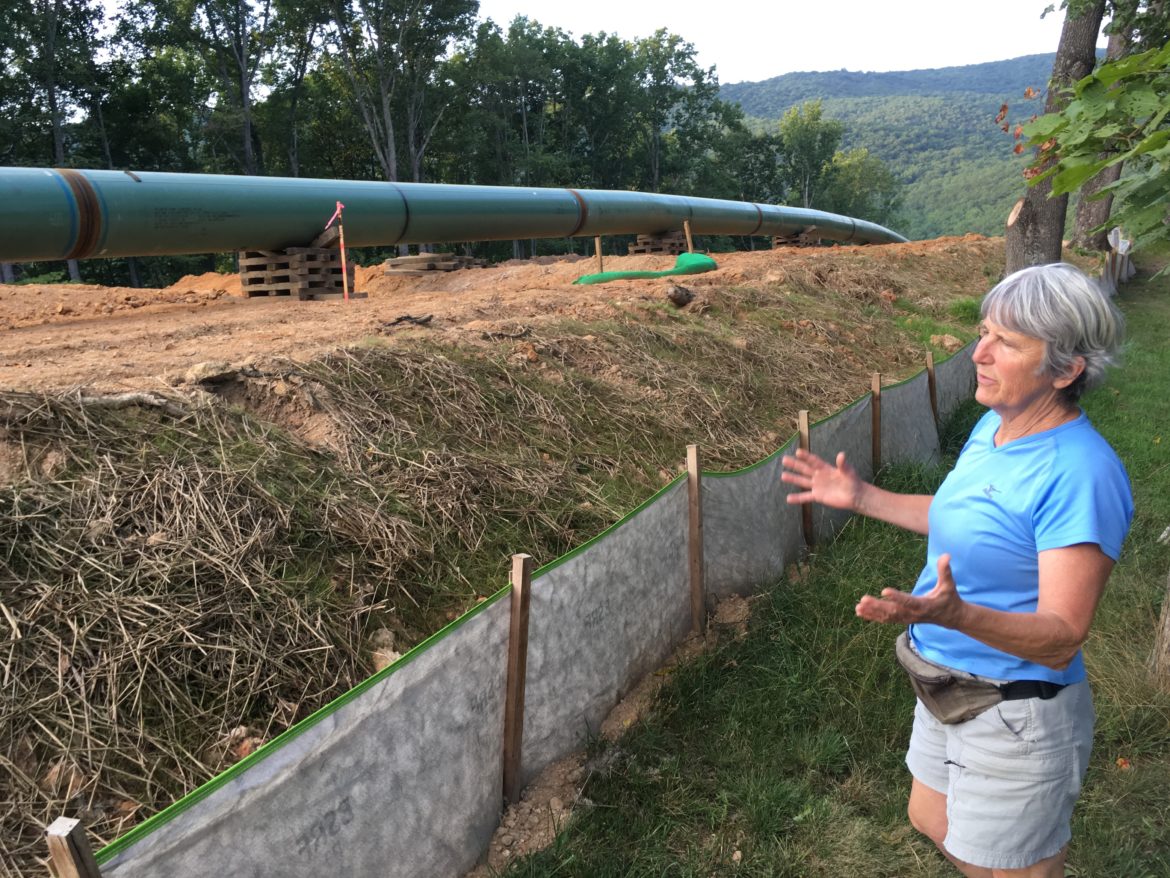 A pair of developments last week were a setback for pipeline opponents but left doors open for new strategies against the project.

The push to cut, clear, grade and trench the 303-mile Mountain Valley Pipeline across the central Appalachia is underway once more.

A pair of developments last week allowed construction that had slowed through August to resume at near full force. The setbacks for pipeline opponents left activists questioning their momentum as well as contemplating new legal and regulatory strategies against the project.

The Mountain Valley Pipeline is one of two being laid from West Virginia to terminals that will connect the gas fracked in the Marcellus Shale region with markets in the Southeast and beyond.

Much of the conflict hinges on the effects of pipeline construction on waterways, which provide drinking water for local residents and drain into major watersheds on both sides of the eastern continental divide.

Rainstorms created erosion issues through the spring and summer that got the pipeline served with notices of violation up until late July, when the U.S. Court of Appeals for the Fourth Circuit vacated the pipeline’s permits to build in Jefferson National Forest and the Federal Energy Regulatory Commission issued a stop work order just days later.

Less than four weeks later, a FERC staffer lifted the stop work order for all but a few miles of the route. In an Aug. 29 letter, Terry Turpin, director of FERC’s Office of Energy Projects, wrote that he had determined the best way to protect the environment along the route was to complete construction and restoration as quickly as possible.

Turpin wrote that long-term use of temporary erosion control devices along the substantial portion of the pipeline route that had already been graded were at high risk for degradation, threatening plant and wildlife habitat and adjacent bodies of water.

He also cited a Bureau of Land Management analysis of alternative routes across federal land that determined the current route provides the most colocation and practicality.

The stop work order remains in effect on 3.5 miles in Jefferson National Forest, where the pipeline company still needs permits, and at the crossing of the Weston and Gauley Bridge Turnpike on land owned by the U.S. Army Corps of Engineers.

On the same day, the Fourth Circuit allowed the pipeline to resume construction at river and stream crossings, reversing course after a 3-judge panel had placed a stay on an Army Corps of Engineers permit issued in June.

The reversals frustrated opponents of the pipeline, who had hailed FERC’s stop work order as a small victory and perhaps a turning point in the fight to permanently stop construction. Some landowners along the route may feel that it never ended. In fact, even while the stop work order was in effect, it didn’t mean that the pipeline had to stop all work. FERC approved most of a temporary stabilization plan that called for continuing to lay pipe in areas where it had been strung and welded.

Russell Chisholm, who works with the citizen-scientist Mountain Valley Watch through the interstate advocacy group Protect Our Water, Heritage, Rights (POWHR), said that some landowners reported an increase in construction activity. That made sense within the context of the pipeline’s stabilization plan, which prescribed continued trenching in areas where pipe had been strung, but it often confused people on the ground.

“A lot of people reacted to the order like ‘stop work means stop work,’” Chisholm said, “but if you know how FERC operates and know the history of pipelines being built through tolling orders and work being allowed to continue while they sort roadblocks out, that’s basically the process they’re doing here.”

Turpin’s letter allows construction to ramp back up without resolution on the question of National Forest permits. The pipeline had laid off roughly half its workforce after the stop work order, but now those workers will be called back.

“We had been limited to just maintaining erosion sediment controls, maintaining rights of way, maintaining our equipment and pipe, and ensuring all of that stays intact,” said Natalie Cox, spokeswoman for EQT, the company behind the pipeline. “Now we are able to go back to full construction.”

Not everyone agreed with the decision, including two FERC commissioners. Commissioners Cheryl LaFleur and Richard Glick released a joint statement expressing “significant concerns with today’s decision to allow construction to resume while required right-of-way and temporary use permits remain outstanding.” Those concerns included not just the lack of permits in the national forest, but also the role of a staff member in making the decision to modify the stop work order.

“In the future, when a court remands or vacates a required federal authorization following the issuance of a notice to proceed, we believe the decision regarding whether and how to proceed with the pipeline should be made by the Commission rather than its staff,” LaFleur and Glick wrote.

That caught the attention of Greg Buppert, senior attorney at the Southern Environmental Law Center.

“It underscores the deep divide at FERC,” Buppert said. “These two commissioners had dissented previously on approval of projects like the Mountain Valley Pipeline, and now they’re expressing their disapproval of this decision to let construction go forward.”

The dissent of two of FERC’s four commissioners may prove significant in the future, pending the appointment of a fifth commissioner. Beyond the commission, Turpin’s letter allowing construction activities to resume may have consequences in the courtroom, as the Mountain Valley Pipeline and its longer sibling, the 600-mile Atlantic Coast Pipeline, both are tied up in numerous cases in federal circuit court.

Nathan Matthews, senior attorney at the Sierra Club, filed a response to the Fourth Circuit on Friday morning related to the BLM’s analysis of alternative routes.

“One part was to point out that our win in the Fourth Circuit case was not just about alternative routes but also sedimentation and the forest plan,” Matthews said. “That’s one reason why construction outside national forest should wait: it’s not clear the Forest Service will be able to clear the pipeline plan, based just on sedimentation issues.

“We also pointed out that it’s just premature for the BLM to publish that analysis. Federal framework calls for analysis to come before decisions are made. The BLM recognizes that, but by putting this analysis out now, they’re saying, ‘Even though we haven’t gone through the steps you’re supposed to go through for federal decisions, here’s what we’re going to say once we decide it.’”

The Sierra Club is pressing legal arguments against the Mountain Valley and Atlantic Coast pipelines in the Fourth Circuit and DC Circuit. In both, FERC had told the courts they didn’t need to issue a stay of the projects because the commission had already issued stop work orders. That’s no longer the case with the Mountain Valley Pipeline, so observers will watch the federal judges in each circuit to see how they respond.

Despite the uncertainty, Chisholm said the Mountain Valley Watch has continued its work. They don’t know what else to do.

“We’re at a point where we have to continue to do this work, simply because people feel like the public’s voice has been left out of the process,” Chisholm said. “Even with victories here and there in court, and citations by the DEQ [Virginia Department of Environmental Quality] and DEP [West Virginia Department of Environmental Protection], we feel like we have to keep going, have to keep documenting, have to keep reporting, even though we might be fairly cynical about what the results may be.”