Photo By
Keith Schneider / for the Energy News Network 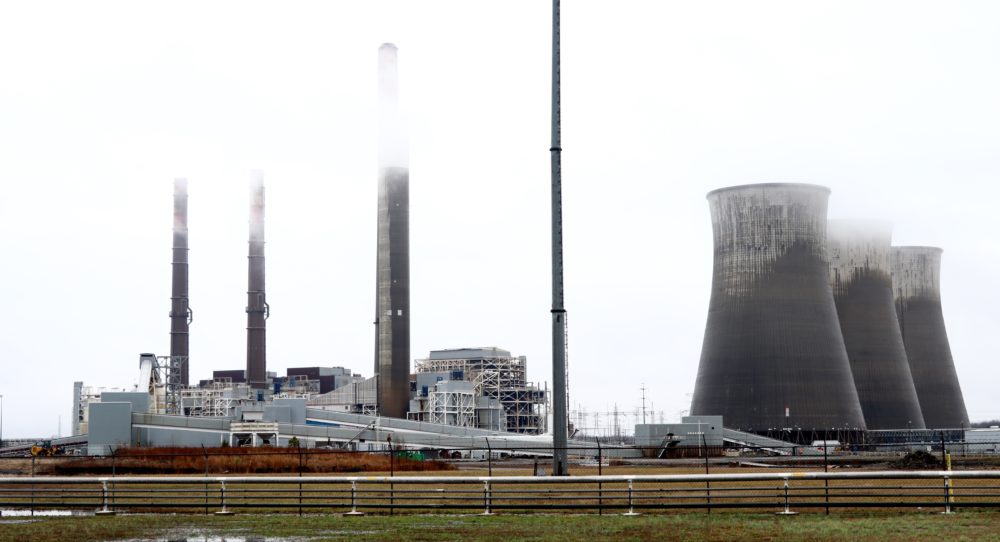 The Paradise Fossil Plant’s three coal-burning units once were capable of generating 2,630 megawatts. In 2017, the two oldest generators were replaced by a natural gas-fueled plant constructed next door. The Tennessee Valley Authority decided on Feb. 14, 2019, to shut the third unit next year. 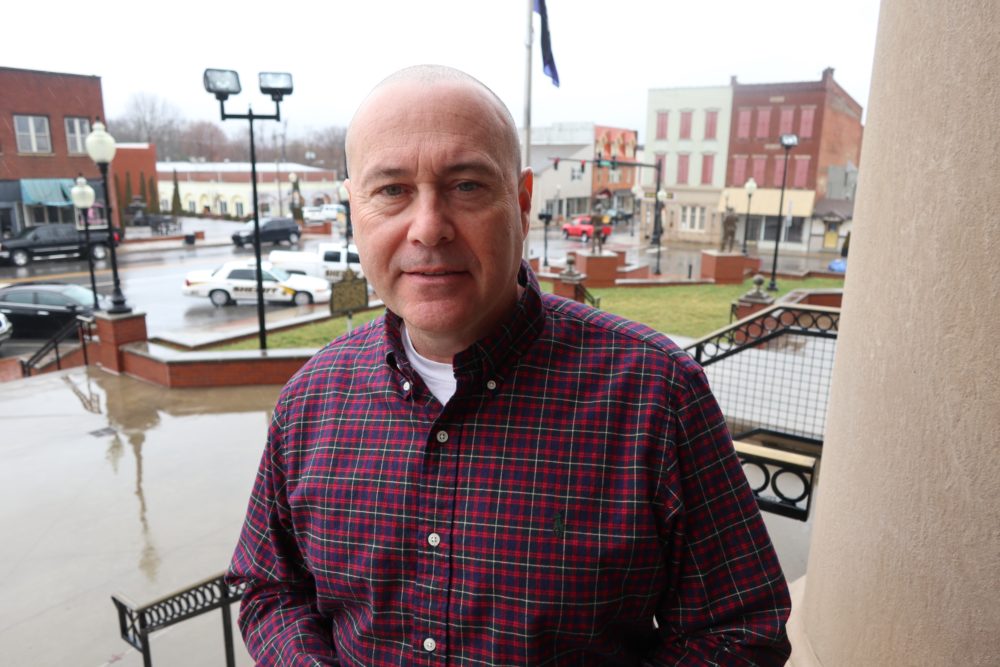 “Closing the plant will be an economic hurricane,” said Curtis McGehee, the judge executive of Muhlenberg County, Kentucky, the site of the Paradise plant since the early 1960s. 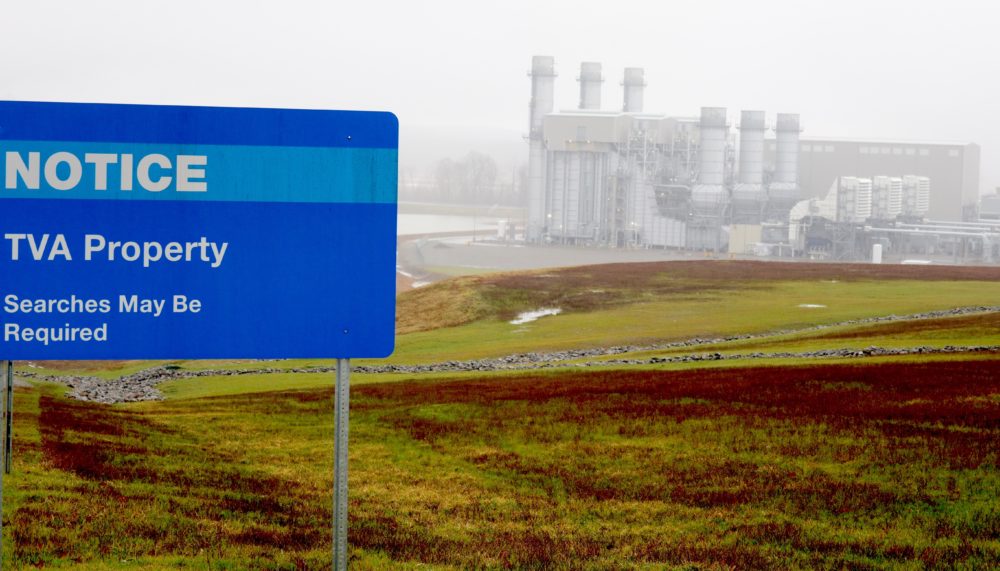 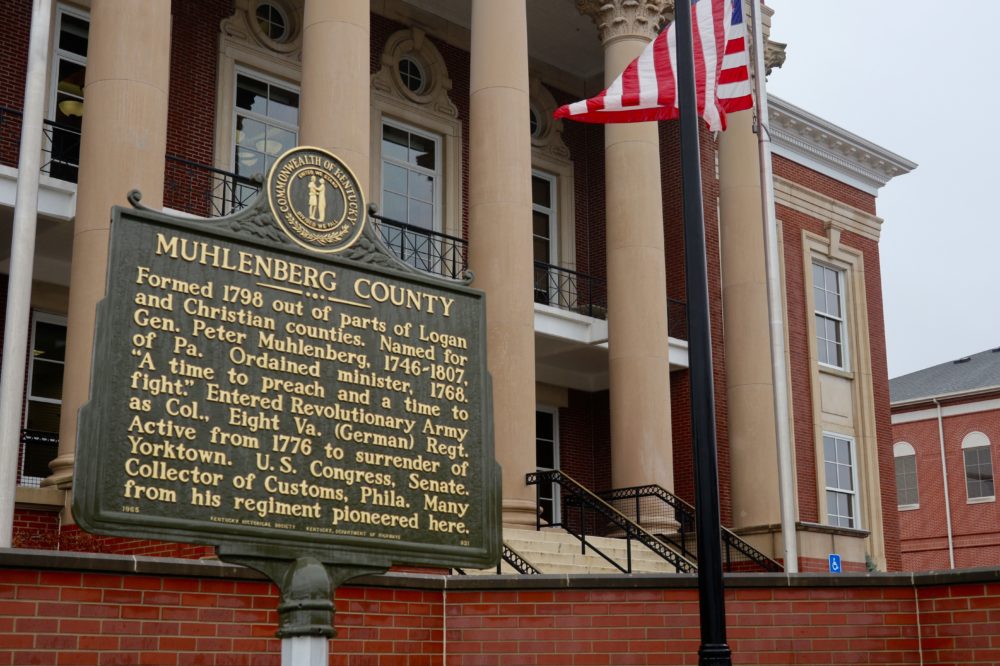 A draft operating plan released Friday calls for a shift to natural gas and distributed generation.

GREENVILLE, KY — In the panorama of the Tennessee Valley Authority’s 80,000-square-mile service area, encompassing over 50 electricity-generating stations that easily serve the needs of 10 million people in the Southeast, the Paradise Fossil Plant stands out. Opened in 1963 with two coal-burning generators and completed in 1970 with the start of a third, the 2,630-megawatt power station was among the largest in the United States and embodied the height of America’s allegiance to coal-fired power.

In 2017, though, the two older coal-burning units were replaced by a big natural gas-fueled generating station. And last week the unyielding currents of technology, operating costs, and public sentiment fully caught up with the Paradise plant and the 86-year-old New Deal federal agency that is its owner and operator. On Feb. 14, the TVA’s seven-member board ordered the Paradise plant’s third and last 1,150-megawatt turbine to shut next year.

That same day, the board also ruled that a 52-year-old, 881-megawatt coal-fired station near Oak Ridge, Tennessee, needed to close in 2023.

The next day, the agency’s staff issued a draft operating plan that reflects just how rapidly the electrical generating sector is evolving in the Southeast and across the United States. Under development for a year and due to be finished this summer, the plan projects that due to diminishing population growth and demand for electricity, TVA’s generating capacity — currently 33,500 megawatts — will be essentially unchanged over the next five years and may not need to increase, at least to 2038.

‘What we are doing is moving toward flexibility to meet peak power demands.’

Yet how that power is produced will change substantially. The authors of the plan call for shifting the agency, which spent more than 30 years in the 20th century building some of the largest centralized coal and nuclear plants in America, to rely much more intensively in the 21st century on natural gas and distributed solar generation.

TVA’s plan proposes to close its four remaining coal-fired stations, the youngest of which is 46 years old, perhaps by 2028. Their combined 6,030-megawatt generating capacity would be replaced by 6,000 megawatts of new solar production. A sizable share will come from rooftop solar installations.

Another of the draft plan’s intriguing proposals reflects TVA’s interest in modular 50-megawatt nuclear reactors, under development in a number of research centers in the United States and Canada. The agency, which operates three big nuclear stations, views producing as much as 600 megawatts from these much smaller machines as a more efficient and less expensive way to develop carbon-free baseload generating capacity.

Depending on what the agency’s board ultimately decides, the cost of the energy evolution from centralized to a more decentralized generating network ranges from $110 billion to $140 billion over the next two decades.

“There’s an emphasis on distributed energy production in the plan,” said Scott Brooks, a TVA spokesman. “There’s a great emphasis on renewable energy. There is no expected need for additional baseload generation. What we are doing is moving toward flexibility to meet peak power demands.” 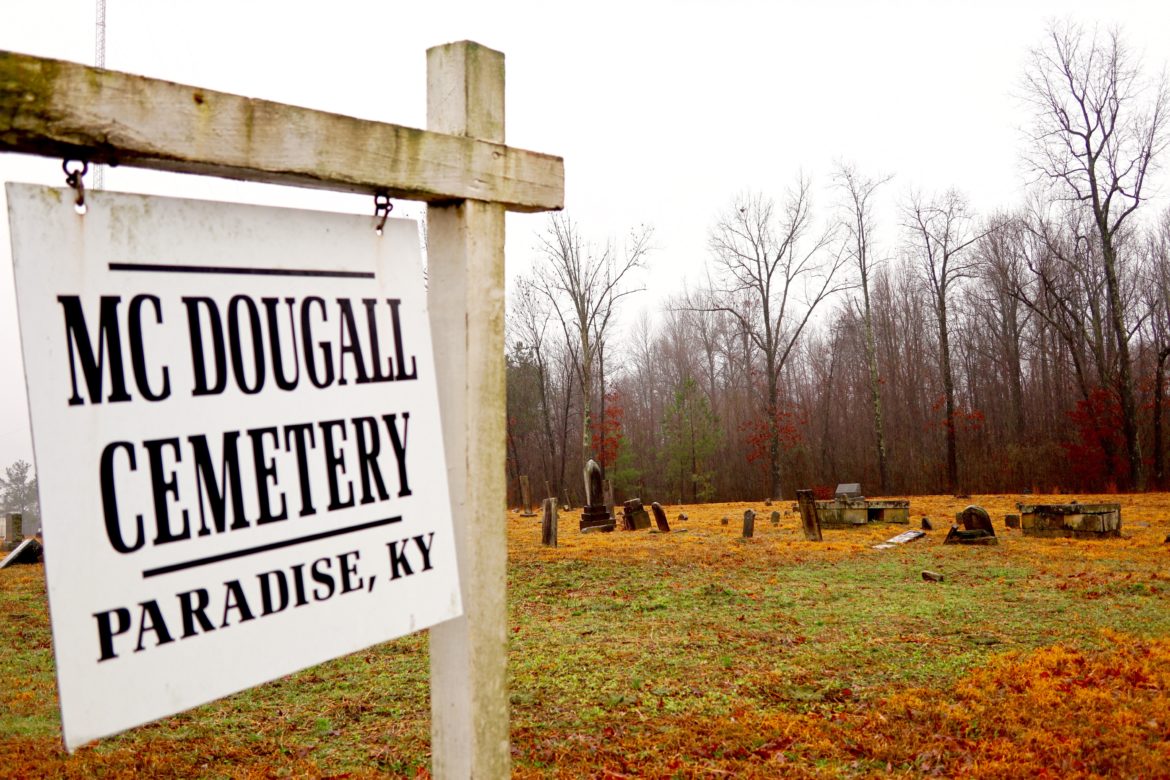 Folk singer John Prine called Paradise “a backwards old town … down by the Green River.” All that’s left, following construction of the big coal-fired power plant and a mammoth strip mine, is a graveyard.

Ever since it was established in 1933 as a public utility charged with pulling Tennessee and parts of six other Southeast states out of Depression-era poverty, the Tennessee Valley Authority has largely operated in the mainstream of the U.S. power sector development. Its first decade focused on developing hydroelectric dams backed by big reservoirs that simultaneously powered World War II munitions and equipment factories, and stimulated recreation and tourism businesses.

In 1942 the agency built its first coal-fired station in Tennessee, and over the next 31 years added 10 more that generated over 13,300 megawatts of capacity. In 1973, TVA opened its first nuclear reactor at the Browns Ferry plant in Alabama and added six more reactors at two nuclear plants in Tennessee. The last, the 1,150-megawatt Unit 2 at the Watts Bar plant in east Tennessee, opened in 2016 and is the newest operating reactor in the United States.

The development of big and expensive centralized power stations met the agency’s 20th-century goal of providing the Southeast increasing generating capacity in one of the country’s fastest-growing regions.

Since 2010, though, almost every one of the utility sector’s basic operating and business principles has completely flipped. Big generating stations got old and expensive to operate. The cost of coal became uncompetitive with ample supplies of natural gas, and its ecological consequences became a potent political issue. The renewable technologies, particularly solar in the sunny Southeast, improved and the price dropped sharply.

‘Closing the plant will be an economic hurricane. The damage to be done will happen in a matter of hours. But it takes years to rebuild from that.’

The Knoxville-based TVA — which generated $11 billion in revenue last year, employs 10,000 people, and is the largest public utility in the country — has strained to keep pace.

It has certainly tried. Every five years, for decades, the agency developed what the industry calls an integrated resource plan, meant to update and guide electricity generation over the next 20 years.

Today, with demand for electricity falling in the U.S, battery storage steadily making its way to market for renewable technologies, and climate change roiling American politics, the TVA’s five-year planning horizon is too long. The draft document under consideration this month is meant to replace the integrated plan completed in 2015. And the 2019 plan is almost certain to be replaced by another in 2023, agency officials say.

What’s also different this year is how much attention TVA’s operations are attracting in and outside its service area. The big federal power agency’s planning process arrives as Washington lawmakers take up consideration of a proposed resolution to eliminate climate-changing emissions — a “Green New Deal” that is supported by 84 House members and 11 senators.

In January, in a report anticipating the Feb. 7 introduction of the Green New Deal, the People’s Policy Project published a provocative research paper intended to push the TVA to the front of the discussion.

In its study, “Fighting Climate with a Green Tennessee Valley Authority,” the 2-year-old Washington-based think tank argued that Congress can mandate a change in the federal energy agency’s mission. All of TVA’s power production, the group said, should be generated from carbon-free sources. The paper also said the agency’s operations should be national, not confined to seven southern states.

The study noted that TVA already generates 54 percent of its electricity from zero-carbon sources, most of it from nuclear energy and hydropower. “Put simply: the TVA knows how to successfully produce large amounts of carbon-free electricity,” the study said. “So it should be up to the task of helping to decarbonize the electricity supply in its current service area and across the country.”

“The Green New Deal is an aspirational idea to decarbonize the economy,” said Matt Bruenig, founder and director of the People’s Policy Project and the report’s author. “We don’t know how to do that necessarily. My thought in this report was to give them something they could use to fit in that idea, and also something they could actually do. Start from TVA and go to the other stuff.”

Read more: A Kentucky city transitions from coal, minus the doom and gloom

Like the Green New Deal, suggesting such dramatic changes in TVA’s mission is certain to take time to digest and sure to invite fierce disagreement. The draft operating strategy made public last week drew a mixed response. The Tennessee Department of Environment and Conservation said in a statement that it was “performing a comprehensive evaluation” of the plan and that it supported TVA’s “desire to plan a generation system capable of delivering affordable, reliable and clean energy for the next 20 years.”

But Simon Mahan, director of the Southern Renewable Energy Association in Fort Worth, Texas, said the increased solar generating capacity that TVA proposes principally occurs after 2023. And TVA’s disinterest in wind generation overlooks opportunities to take advantage of federal tax credits that would allow wind farms to replace generation from natural gas.

Taken together, Mahan said, the TVA plan puts the federal utility well behind other big electrical suppliers in neighboring states. In Louisiana, CLECO, the Central Louisiana Electric Company, is purchasing 1,400 megawatts of new wind and solar capacity. The Southwestern Electric Power Company, in Arkansas, Louisiana and Texas, just announced its intent to buy 1,200 megawatts of wind power. NIPSCO, the Northern Indiana Public Service Company, is phasing out coal generation and opened bids this year to supply all of its electricity with wind.

“TVA is just not keeping up with private utilities,” Mahan said. “The plan doesn’t optimize energy generation and does not allow renewable resources to compete with existing capacity.”

In Greenville, seat of Muhlenberg County, another TVA decision is producing public disruption for the exact opposite reason — for refusing to continue with coal-fired power. With its towering stacks shrouded in low winter clouds and its big square powerhouses set like medieval castles on the western bank of the Green River, the Paradise Plant so embedded itself in American culture and Kentucky’s fossil fuel economy that folk singer John Prine enshrined the plant in a famous ballad in the early 1970s. Nearly 50 years later, in a mid-February tweet, President Donald Trump called on the TVA board to hold off on a decision to shut down the last of its three boilers.

Coal is an important part of our electricity generation mix and @TVAnews should give serious consideration to all factors before voting to close viable power plants, like Paradise #3 in Kentucky!

The presidential appeal failed. In a rural western Kentucky county with 31,000 residents and some 8,100 jobs, losing the 130 highly paid federal positions at the Paradise plant next summer makes a difference, said Curtis McGehee, the county judge executive.

“Closing the plant will be an economic hurricane,” McGehee said. “The damage to be done will happen in a matter of hours. But it takes years to rebuild from that. I don’t think we’ll rebuild from it my lifetime.”

Ripple effects will be substantial. Most of the nearly 1 million tons of coal burned each year at Paradise are produced in two nearby coal mines owned by Murray Energy Corp. In a statement, Robert E. Murray, the company’s chief executive, said it had “690 employees in the vicinity of the plant.”

Grant Jones, vice president of Ray Jones Trucking, which hauls about 200 loads of coal daily to Paradise, said 25 drivers will be affected by the closure. That is half of his company’s revenue and transportation staff.  “It’s definitely going to hurt,” he said.

The Saturday before the TVA decision, the community held a big rally that was attended by Kentucky Gov. Matt Bevin. “We reached out to the TVA board to let them know about what is happening here,” said McGehee. “This is going to be devastating to our community. It affects our schools. Our businesses. There are so many people that will lose their jobs.”