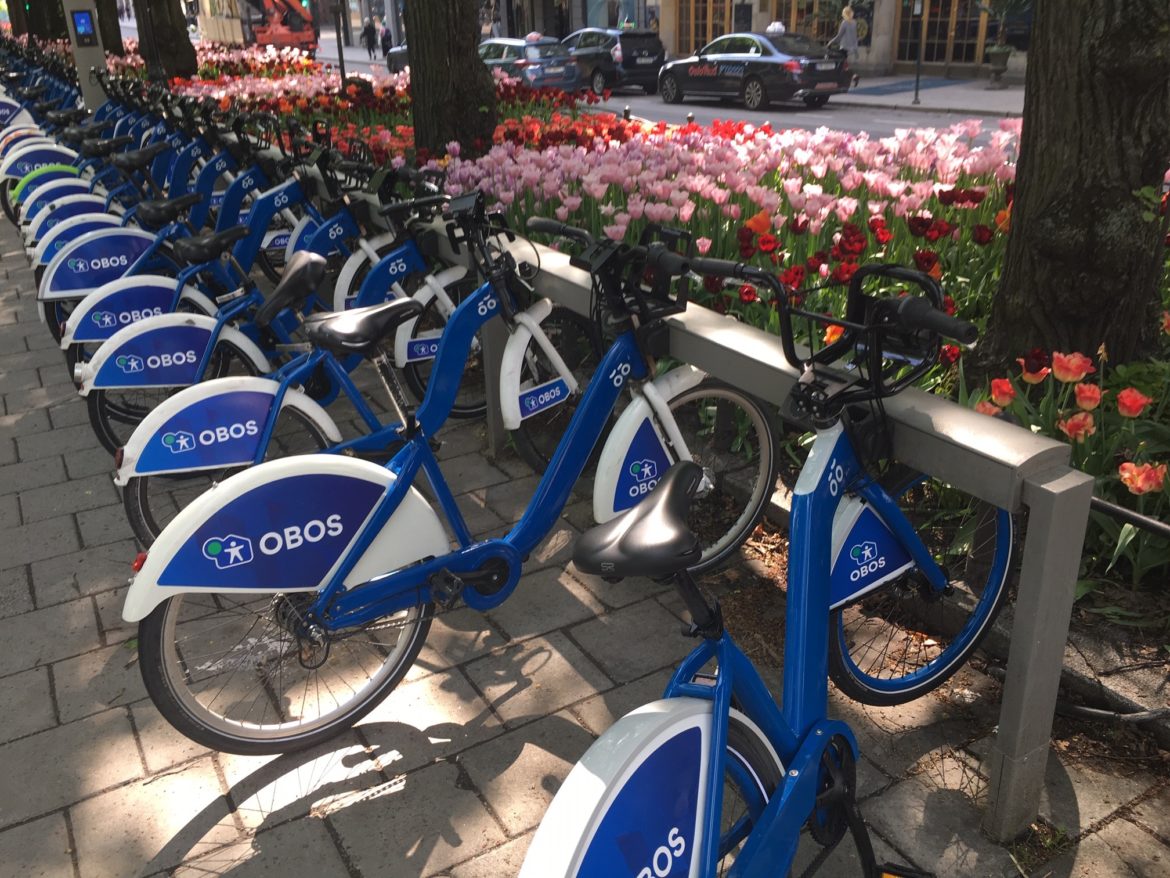 As part of an effort to limit vehicle traffic in its city center, Oslo expanded its bike-share programs.

“When you have limited space, who should that be for? We want to prioritize people over cars,” an Oslo official said.

Rush hour in the center of Oslo, Norway, is not the snarl of gridlocked cars and frustrated drivers that marks the end of the workday in many cities. At public transit stops, digital signs announce expected arrivals and, at the appointed time, the tram or bus rolls up. A handful of vehicles breeze through intersections, while hundreds of commuters glide by on bicycles or motorized scooters.

Though there are many reasons for Oslo’s relatively stress-free commuting hours, one of the major factors is the progressive city government’s commitment to creating what it calls a “car-free city center.” It’s a plan intended to make the city more welcoming, more connected, and, ultimately, more green.

“In the big picture, it’s all about giving the streets back to the people,” said Hanna Marcussen, Oslo’s vice mayor for urban development. “It’s about livability.”

Across the Atlantic, Boston — a city notorious for its traffic congestion — is also trying to figure out ways to make the streets more people-friendly and lower-carbon. The city has declared a goal of going carbon-neutral by 2050 and has made slashing transportation emissions an essential part of that plan. As Boston tries to implement changes, Oslo’s experience shifting away from private vehicle use can offer valuable lessons in the importance of persistence, pilot projects, and communication.

“We can improve our quality of life if we do a better job of sharing our roads, and it’s also good for our carbon footprint if we are less reliant on cars,” said Boston City Councilor Kim Janey, who visited Oslo for an urban design and sustainability conference in May. “We are going in the right direction, but much more work needs to be done.”

Oslo’s move away from personal automobiles began in 2015, when the newly elected city government announced its intention to live up to campaign promises by getting cars out of the city center by 2019. Though the initiative is generally referred to as the “car-free city center,” cars are not being completely eliminated. Instead, the goal is about making the space as people-friendly as possible, city leaders say.

“When you have limited space, who should that be for?” Marcussen said. “We want to prioritize people over cars.”

Achieving long-term environmental benefits is a real, but secondary, concern. The scope of the plan is small enough that no one expects it alone to create significant reductions in carbon emissions. But the pillars of the initiative — putting people first, promoting public transit, encouraging public rather than private uses of common space — are helping to drive larger shifts in the way people relate to cities and private cars, shaping a culture in which polluting cars are less central.

To achieve the vision of a people-first downtown, city leadership has gone about shaping the center to discourage cars. More than 700 parking spots have been removed, with the spaces turned into bike lanes, outdoor seating for businesses, and mini-gardens. Cars have been banned from some areas, including the plaza in front of Oslo’s imposing city hall, which has gone from a busy traffic circle to an open area dotted with flowers and cafe tables.

The reaction has been largely positive among residents. Some had initial concerns about the impact on business or quibbled with the details, but there is widespread support for the overall goals and philosophy.

“Public transportation covers all my needs,” said Hans Christian Tjonnas, a resident of the Oslo neighborhood of Skøyen. “It’s super easy not to use your car in Oslo.”

Oslo has also expanded participation in bike-share programs. Local startup Urban Sharing took over managing the service in 2016 and set about making the system a little more human, said company CTO Johan Høgåsen-Hallesby. A live chat feature lets riders experience some human connection even when riding solo. And instead of numbers, the individual bikes have names, drawn from official lists of the most common names in the city; pictures featuring riders who have found bikes bearing their own names have become an Instagram favorite, Hallesby said.

During Urban Sharing’s first season, just over 2 million trips were taken on its bikes; in 2018, that number was up to 2.7 million.

Expanding infrastructure for bikers and improving the bike-share experience means more regular public transit riders are likely to switch to bike commuting, Høgåsen-Hallesby said. In turn, easing congestion on trams and buses makes public transportation more appealing to people who would otherwise depend on cars, he said.

“Once you reclaim the streets, it opens the way for all these other ways to get around,” he said.

This year, after four years of trying out ideas and listening to feedback, the city is making permanent changes. The only parking spots remaining will be those for people with disabilities. The total area for pedestrians will be doubled. Some roads will be open to limited, one-direction car traffic and deliveries to local businesses will be allowed during limited hours.

There was — and continues to be — backlash against the plan. A lot of business owners were concerned that they’d lose business when it got harder to park near their stores. Other residents worried it would be impossible to depend on bikes during Norway’s cold winters.

Local journalist and public relations consultant Jarle Aabø wanted to draw attention to concerns about the changes, so he started an online newspaper, Ja Til Bilen I Oslo, which translates to “Yes to the car in Oslo.”

“The major problem is that the city government has not performed consequence analysis before they actuate,” he said. “It’s a war against cars.”

Marcussen admits that the phrase “car-free city center” has caused some unnecessary friction. If she had it to do over again, she said, she would use a label like “pedestrian city center,” focusing more on what the plan was trying to create than on what would be eliminated.

Still, the city did plenty right, she said, citing the willingness to tweak the plan in response to feedback from residents and businesses. The city also made ample use of pilot projects to demonstrate what the changes would look and feel like, an approach Marcussen said is vital when undertaking such large projects.

“The best way to get people to participate in change is to let them experience it,” Marcussen said.

In Boston, plans for a more bikeable, walkable city have been underway for a few years, but without the fanfare Oslo’s more aggressive moves have evoked. The city has been expanding its bike lanes for the past several years, including Mass Ave. Newbury Street is shut down to cars for a day three times a year, creating a mile-long pedestrian shopping district. City Councilor Lydia Edwards hopes to create ride-share pickup zones in some of the most congested neighborhoods, reducing the number of Ubers and Lyfts circling already busy streets.

The Complete Streets initiative, launched in 2013, provides a set of guidelines promoting public transportation, open space, and pedestrian and bike access that intended to be a jumping-off point for every new project involving roadways or sidewalks in the city. A separate initiative, Go Boston 2030, is a transportation plan that aims to reduce the number of commuters who drive alone by half while dramatically increasing the percentage of people who walk, bike, or take public transit.

“We’ve been ready to make hard choices, to accommodate alternate modes of travel on our streets even if it sometimes means eliminating curbside parking or even a travel lane for cars,” said Vineet Gupta, director of planning in the Boston Transportation Department.

Whether Boston can translate these visions into a greener city remains to be seen. Boston does not have the same clear mandate for swift change Oslo enjoyed. The city leaders in Oslo were elected on an explicit platform of removing cars from the city center. The issue is not nearly so central or pressing in the public conversation in Boston.

Bike infrastructure, for example, is not developing at anywhere near the pace required to meet the goals laid out in the Go Boston 2030 plan, said Becca Wolfson, executive director of the Boston Cyclists Union, a bicycle and public transit advocacy group. Though the plan lays out a short-term goal of developing 32 miles of safe, accessible bike lanes between 2017 and 2022, only eight of those miles have been built so far, Wolfson said.

“There needs to be more of a political backbone to make those changes,” she said. “We have a long way to go.”

Furthermore, while Oslo is ringed by forestland, Boston is surrounded by more densely populated cities and suburbs; many of the factors that determine transit patterns within the city are simply beyond its control.

And the lack of broader governmental support, particularly at the presidential level, is also worrisome to Edwards, who also traveled to Norway for the urban sustainability conference in May. Without wider action, anything Boston does may not have much impact, she said.

“We don’t have a federal partner,” she said. “When you have a federal government that doesn’t even believe in climate change, it makes it really hard.”

Perhaps the biggest open question is whether drivers are willing to give up the flexibility and independence of a private vehicle for a vision of the future that is still rather abstract. Those pushing for change in Boston are optimistic that abundant communication and community involvement can help effect that change.

In Oslo, Marcussen said, the key to pushing through doubts were clear communication and persistence, even when opposition appears.

“There will be controversy,” she said. “You don’t have to change your mind every time you reach some resistance.”