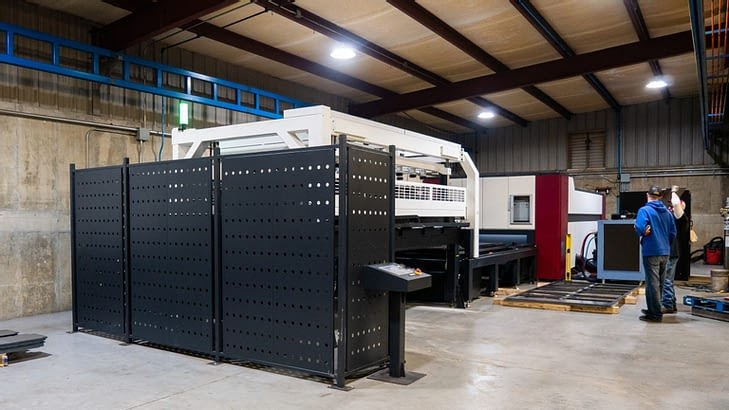 Employees at Lawrence Brothers Inc. in Tazewell County, Virginia, use lasers to create steel battery trays for a range of industries. Laser technology has helped the business diversify beyond coal.

Under third-generation leadership, a family-owned company has pivoted to energy storage and sees opportunity for other southwest Virginia companies to follow.

When Melanie Lawrence packed her bags for the University of Tennessee in 1998 to major in Spanish and English, she aspired — not at all maliciously — to leave Tazewell County in the dust.

The Virginian flourished in Knoxville.

Her academic aptitude was her ticket to Spain and then Brussels for a graduate degree in international law and relations. She traveled the world — including a year spent aiding refugees on the Ethiopia-Sudan border — practicing humanitarian law. By 2007, she was married to fellow globetrotter Fernando Protti and living in a Washington, D.C., suburb.

A year later, home called. The family business, which manufactured battery trays for coal-mining equipment, was seeking leadership from the third generation.

The oldest of four sisters, Protti-Lawrence somewhat surprised herself by saying yes, aware that the wide gap between the nation’s capital and Appalachia isn’t measured in mere mileage.

For the last dozen years, Melanie, president, and Fernando, CEO, have fearlessly focused on diversifying Lawrence Brothers Inc.’s product line beyond less-and-less-relevant coal. Now, just 10% of its business is coal-related, a severe and intentional drop from 95% in 2008.

“If we had stuck solely with coal, we would be out of business,” Protti-Lawrence said. “You can’t strategically plan or grow if you’re relying on one industry. We made an absolute effort to go beyond our wheelhouse.”

That grit and innovation inspired an “aha” energy storage moment for Adam Wells of Appalachian Voices and Vivek Shinde Patil of Ascent Virginia.

Both nonprofit thinkers have been dogged about linking an oft-forgotten slice of their state to the wealth of jobs and knowledge blooming in the booming renewable energy industry. Why couldn’t companies in Tazewell and Buchanan counties pivot to exporting advanced batteries and other components that fuel cars in Asia, light homes in California or store energy generated by wind farms in Europe?

In tandem, co-leaders Wells and Patil are intent on attracting national and global businesses willing to buy locally made energy storage products and consider setting up a physical presence in southwest Virginia.

The 24-member Virginia Growth and Opportunity (GO) Board is scheduled to vote on the proposal on March 16. In January, it was approved by a regional GO council. GO was created in 2015 to create private sector jobs in a state long reliant on the military and federal government.

Characteristically, the hyper-driven Wells had read the GO Virginia manual cover-to-cover years ago, so he would be prepared to strike, so to speak, when the timing was right. Before the big August ask, GO Virginia had funded a regional market analysis coordinated by the Solar Foundation. That study identified batteries and the related casings, electrical components, and accessories as a potential gold mine for job and investment growth.

Those findings were a balm for Wells, who has dedicated his career to turning solar into an economic catalyst in Appalachia. As the force behind the creation of the Solar Workgroup of Southwest Virginia five years ago, he continues to guide a coalition navigating the daunting policy, utility and cultural obstacles to commercial solar installations.

Still, as his nonprofit’s regional director of community and economic development, he knows the stakes are higher with the battery project. Philanthropists who fund rooftop solar projects are patient and don’t expect immediate success. But Wells knows it’s a different story with taxpayer dollars.

“We can’t mess this up,” said Wells, a Wise County native. “There’s no room for error because we’re talking about jobs for our people. If we do it well, we’ll be a piece in the puzzle figuring out the future of this area for the next 50 years and keeping it from going farther down the drain.

“We are the ones in the region to do this. I know a lot of people are watching as to whether we will succeed or not.”

The power of listening locally

Patil’s path to southwest Virginia was far more circuitous than Wells’. As a college graduate, he emigrated from India to earn a doctorate in chemical engineering at Ohio University. Professionally, he specializes in human and environmental health after founding two biotechnology startups.

Shortly after moving to Arlington County in 2015 and delving into local politics, he began traveling across his adopted home state on a listening tour, of sorts. What he heard everywhere, but at a higher volume in poorer pockets, was a cry for jobs.

His urge to build bridges to employment prompted him to co-found Ascent Virginia as a social impact venture promoting clean technology and economic development in early 2018. That same year, he made the first of at least 25 self-funded follow-up trips to coal country.

“Southwest Virginia has become my second home,” Patil said about what he calls his labor of love. “The people are so warm and welcoming.”

On his forays, he connected with Wells, company leaders, and Jonathan Belcher, executive director of the Virginia Coalfield Economic Development Authority. By summer 2018, they were collaborating with a handful of other partners on a strategy to launch the energy storage project.

To strengthen existing local manufacturers, their chief priority needed to be delivering realistic data-based technical assistance and market diversification opportunities. Over the years, the region had been stung by knights in shining armor full of long-term promises who depart after feeding on tax breaks.

“The way Ascent operates, we never use the word ‘help’ because it sounds condescending,” Patil said, adding that too many outsiders wiggle into the region with an extractive mindset. “Where we excel is by listening with intent and connecting the dots to facilitate conversations that empower local organizations to take action.”

Wells draws on a baseball analogy to explain their two overarching strategies. One, aimed at local companies, demands the consistency of hitting solid singles and doubles to keep advancing runners. The other, a bit wilder, requires swinging for the fences. Hitting a home run would mean landing a battery, electrification or electric vehicle company with access to markets near and far.

“It’s a little matchmaking,” Wells said about the latter. “We’ll be finding out which companies have a soft spot in their heart for southwest Virginia.”

Wells and Patil would collaborate with Belcher and his staff at the economic development authority on the home run strategy, as GO money can’t go toward marketing.

“Adam’s baseball analogy is correct,” Belcher said. “Singles and doubles are what win ball games, so we’d take those as well.”

Bang for the buck on 26 jobs

An analysis submitted with the application for $486,366 to GO Virginia predicts that the project could create 26 direct jobs and millions in investments. The required matching funds would come from the four targeted companies, the Thompson Charitable Foundation, and in-kind contributions from other project partners.

As an example, the companies would invest in hiring and training workers, expanding factory footprints, and purchasing new equipment.

Belcher noted that those numbers are in line with the current costs of economic development.

“And I’ve seen state projects that are as high as $100,000 apiece. It depends on the type of job and the skill level. These would be skilled jobs.”

Virginians would be getting a reasonable bang for their buck because of an anticipated boost in indirect jobs, especially if an outside energy storage company settles in the region, he said.

“It would be a good impact if we are able to be successful, which I think we will be,” Belcher said, emphasizing that energy storage is a natural segue.

“It wasn’t picked arbitrarily,” he said about mining’s long reliance on batteries and electrification. “The local knowledge and skillsets might not be an exact match with electric vehicles, but there’s a foundation to build on. Not every region has that aptitude.”

‘Hope is not a strategy’

Protti-Lawrence is invigorated by the idea of a homegrown diversification project that could allow her neighbors to flourish.

“We often continue to sell ourselves short,” she said about an ingrained trait of Appalachians. “This is about shifting that mindset. Instead of taking what the local politicians tell us we have to take, we can let them know what we actually see and want.”

On paper, she continued, it’s easy to embrace the idea of expanding a company’s product offerings. What is glossed over is the hard work, persistence and long hours it entails.

“Hope is not a strategy,” the 41-year-old said. “You have to be able to take risks and make something your own.”

Her family’s business has evolved on multiple levels since 1974 when her grandfather, Jim, invented it with his brother, Dale, as a welding shop in a three-car garage in Bluefield. Mark, Jim’s son and Protti-Lawrence’s father, rose through the ranks before retiring in 2018.

For decades, her company’s signature product was the steel enclosures designed to protect the battery cells powering the heavy equipment that is the backbone of underground coal and hard rock mining.

She and her husband have not only advanced the technology with laser tools, but have also extended their market overseas and tapped further into the energy sector as well as into the airline and forklift industries. Though business has ebbed and flowed, they now employ 82 on an 80,000-square-foot factory floor.

The irony of switching gears to support clean energy instead of a maligned fossil fuel is not at all lost on Protti-Lawrence.

“I’ve always been about taking care of Earth and mitigating climate change,” she said. “This is an excellent opportunity to come full circle and figure out how our business fits into that puzzle.”

In the meantime, Wells, of Appalachian Voices, admits that worries about coordinating such a mammoth endeavor haunt him when he bolts awake in the middle of the night.

“But then I remind myself that the opportunities are great and aligned with what we want to do,” he said about how the team has balanced both data and human needs. “The universe keeps sending us green lights. And that’s not just because of dumb luck.”