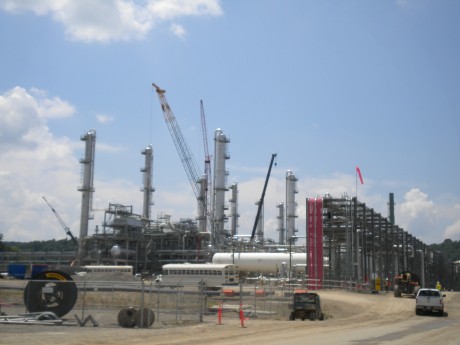 Controversy continues over the rapid growth of high volume oil and gas operations made possible by horizontal hydraulic fracturing, or fracking.

But at its “State of the Play” event at Stark State College, officials with the Ohio Department of Natural Resources (ODNR) had only enthusiasm for the state’s growing shale gas industry.

The state’s natural gas production nearly doubled last year, mostly as a result of horizontal wells in the Utica Shale in eastern Ohio. Market shifts have made that formation’s “wet gas” particularly profitable.

Such wet gas has a relatively high proportion of other light hydrocarbons in addition to methane. Those other hydrocarbons can be separated out, processed and sold to make plastics and other petrochemical products.

“These are very valuable products,” said Rick Simmers, Chief of ODNR’s Division of Oil & Gas Resources. “And they make the Utica unique among shale plays in the entire nation and, for that matter, in the world.”

If the natural gas were pure methane, then 1 billion cubic feet would be enough for more than 10,000 average homes. However, the Utica’s wet gas contains significant amounts of ethane, propane, butane, and pentane, meaning that volume provides natural gas to fewer homes.

Chemically speaking, pure natural gas is methane, or CH4. Ethane, propane, butane and pentane have two, three, four and five carbon atoms per molecule, respectively. The number of hydrogen atoms per molecule varies for each compound as well.

While all five compounds can be burned as fuel, they have other uses too. Methane is a major feedstock for fertilizer, for example. Ethane, propane, butane and pentane are especially valuable as feedstocks for the petrochemical industry.

“A lot of it can be refined into plastics or polymers,” explained David Mashek, a spokesperson for natural gas processor M3 Midstream. Those materials end up in a wide range of products, ranging from computers to clothing.

Mashek and other representatives of M3 Midstream recently led journalists on a tour of the company’s UEO Buckeye processing facilities in Ohio as part of a Shale Country Institute organized by the Institute for Journalism & Natural Resources.

Wet gas requires additional processing to make its methane and other gas products usable. Because of this, changes in the market price for natural gas played a role in making the Utica Shale and its non-methane components profitable.

Six years ago, when the U.S. wellhead price for natural gas was around $11 per thousand cubic feet (MCF), dry gas was more profitable, because getting it to customers did not require those additional processing costs.

After large-scale production of shale resources began, however, the wellhead price dropped dramatically. That made the other gas products relatively more valuable than they were before—and worth the cost of processing.

“Now since you’re only getting $3 per MCF for dry gas, you can also sell those wet gas products,” Mashek explained.

M3 Midstream operates the UEO Buckeye facilities in eastern Ohio as a joint venture with Access Midstream Partners and EV Energy Partners. The plants use a combination of chilling and boiling to separate different compounds from wet gas.

Cooling the material down to about -140 degrees F causes the heavier hydrocarbons to go from the gas to liquid phase. The remaining methane gas—about 80 percent of the original natural gas volume—travels by pipeline to the natural gas distribution market.

The liquid product stream travels in another pipeline to the Harrison Hub fractionation plant in Scio, Ohio. The company chose that location because of its access to railroad lines.

Heating the liquid causes different components to boil at specific temperatures. The distillation process thus separates out each compound.

Roughly 50 percent of the plant’s production is ethane. About 30 percent is propane, and the rest is split between butane and pentane, which is natural gasoline.

Ethane leaves the plant via pipeline. Propane, butane and pentane flow through pipes to on-site storage tanks, and from there each product goes into rail cars for shipping.

The plant’s loading terminal can fill up to eight rail cars of propane and four each of butane and pentane at the same time. “We load it out as quickly as we make it,” Hay said.

Over the last two years, midstream processing became essentially “a new industry” that Ohio had not had “in that order of magnitude,” David Mustine of JobsOhio said at the “State of the Play” event. Companies have already spent or committed more than $6 billion so far for midstream operations in Ohio, including 11 processing facilities.

“The processor capacity and the pipeline capacity to carry the gases from the wells to those processors was fairly limited” last year, Simmers noted. “More wells were drilled than carrying capacity existed. So what that meant was, as wells were drilled and completed, not all of them could produce.”

Nonetheless, ODNR expects to approve hundreds more drilling permits this year and in 2015.

At the same time, the Ohio Environmental Protection Agency has sped up the permit process for the oil and gas industry. Companies can get a general permit “in a matter of weeks, versus several months,” Ohio EPA Director Craig Butler said at the “State of the Play” event.

Some oil and gas operations also qualify for a “permit by rule.” In those cases, Butler said, companies can be working in the field “in a matter of days.”

While the “State of the Play” event was full of enthusiasm for Ohio’s oil and gas industry, other groups have a much more skeptical view.

A recent report from Policy Matters Ohio concluded that shale operations have more costs than benefits for Ohio’s Carroll County.

The streamlined permitting procedures touted at State of the Play present a serious problem for environmentalists, who say that easing the process for industry makes it harder for environmental groups, communities and neighbors to raise a wide range of substantive concerns.

“There is an unfortunate and ongoing trend by the agencies to wholly avoid the public process and duck safeguards that are designed to protect property values and public health,” said Brian Kunkemoeller of the Sierra Club’s Beyond Natural Gas Campaign. “Issuing a general permit is giving the industry carte blanche.”