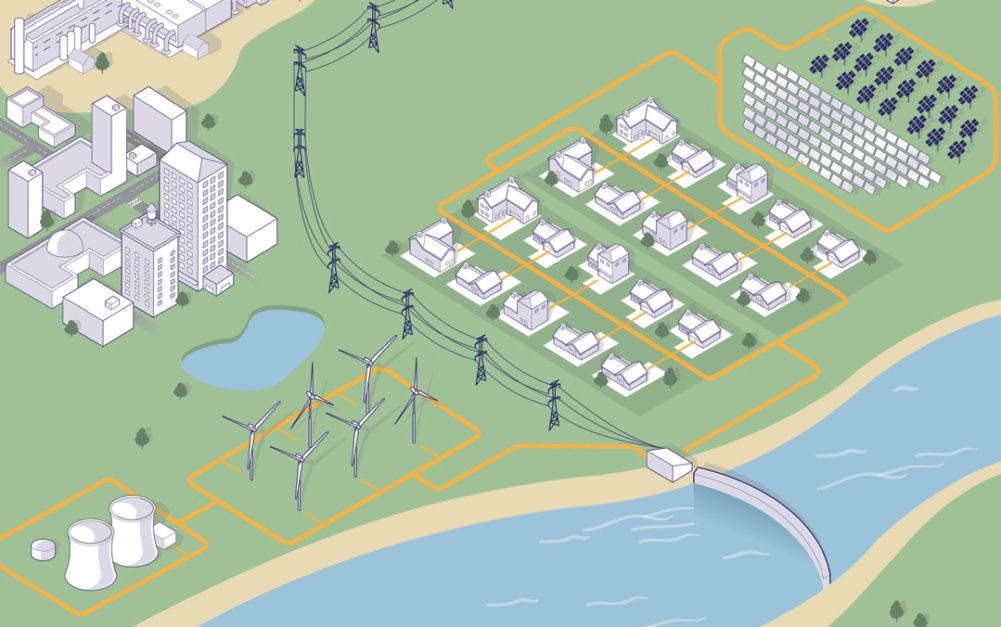 A new study suggests that microgrids – a rarity in today’s power sector – will evolve to become a “fundamental building block” of the 21st-century grid.

Used primarily to ensure reliability and access in military and other critical applications, microgrids have emerged in recent years as a niche interest for utilities and communities looking to bring more renewables online and increase resilience in the face of extreme weather. Despite the heightened profile, microgrids – islandable networks of generation and distribution – remain a small part of the U.S. energy system, making up a fraction of a percent of the nation’s total power generating capacity.

That is poised to change, according to a report released earlier this month by the National Electrical Manufacturing Association (NEMA), an industry group representing electrical, medical imaging, and radiation therapy manufacturers.

“[The grid is] moving away from a passive to an active grid,” said Steve Griffith, an industry director at NEMA. “You can actually have distributed generation based on renewable resources – solar, wind and electrical storage devices – power that not only flows from the utility to the customer, but now from the customer back to the utility.”

Microgrids help manage these reverse power flows by addressing the technical challenges of variation in voltage and frequency. It’s why NEMA envisions a future where microgrids play a foundational role in the way the broader power system operates, working in tandem with the existing power structure.

“From 2025 onwards, fully controllable, independent microgrids interconnected with [direct current] links will allow for full decoupling from the alternating current (AC) electric power system.” the report concludes. “They will also facilitate the segmentation of the distribution system, a new paradigm for electric grid management.”

It is estimated that there are between 100 and 200 fully functional microgrids in the U.S. today, according to the Institute for Local Self-Reliance, a Washington-based nonprofit. These operate largely independent of one another, but there are already signs of interconnected microgrids on the horizon.

In northern Illinois, ComEd hopes to build up to six microgrids across the region. The first of those is being built adjacent to a 9-megawatt microgrid at the Illinois Institute of Technology. In September 2014, ComEd received a $1.2 million dollar grant to build a controller that would connect the two systems, allowing the utility to transfer load and supply back and forth. When complete, the combined units are expected to make up the first microgrid cluster in the U.S.

Bringing additional microgrid projects online faces two kinds of challenges, according to NEMA. The first is technological. There is still a need for better systems for converting power and controlling how and when it is distributed on a small scale, Griffith said. Better energy storage would also make microgrids more attractive to utilities and communities.

The second challenge has to do with regulatory issues, which are “the single most important barrier to microgrid deployment, as both independent entities and as systems integrated within distribution utilities,” according to the report. Because microgrids are a relatively new technology, there are a lot of unanswered questions about who has oversight over them and how they will impact broader power markets.

Standardizing how microgrids connect to the grid is of primary interest to utilities and grid operators. The Institute of Electrical and Electronics Engineers, which writes many of the standards used in today’s power sector, is currently revising IEEE 1547, its standard for connecting microgrids to the power distribution system. While that standard is under review, utilities and regulators are “reluctant to permit the interconnection of technologies to the grid without standards for equipment and performance,” the report reads.

Still, there’s a tension between the need to standardize the system and the customization that microgrids offer, said Chris Marnay, a retired staff scientist at Lawrence Berkeley National Laboratory.

“There’s a lot to be gained by diversity, which tends to argue against standardized controllers, devices, etc. and having something that is more locally engineered to local requirements and local resources,” Marnay said, while still noting that some degree of standardization is necessary.

Despite these obstacles, microgrids are expected to remain a fast-growing industry. Over the next five years, U.S. installed microgrid capacity will increase 115 percent to reach 4.3 gigawatts, according to GTM Research.

The push to deploy more renewables – particularly as more states set aggressive renewable portfolio standards – will drive microgrid deployment, according to the NEMA report. And as the price of renewables and storage continues to drop, the business case for building microgrids will only improve.

Today, the technology to develop a 5 megawatt microgrid can cost anywhere between $500,000 and $1.5 million, according to NEMA, but the benefits can be difficult to quantify. Increased reliability and resilience and reduced greenhouse-gas emissions all factor into cost-benefit analyses, but they don’t always come with explicit, bottom-line savings.

To be sure, few expect the existing electric grid to go away anytime soon – if ever. Marnay believes there will always be a centralized grid upstream of the substation for delivering large loads of electricity. But, he said, it’s likely that utilities will be operating very differently where power is distributed to the end user.

“If you have a lot of microgrids … and these entities are really taking care of sensitive loads, what does it say about the megagrid?” Marnay said. “At the end of the day, if reliability and resilience become something that’s in the extremities of the grid, this might really change our thinking so that the megagrid becomes something we’re not so obsessed with.”