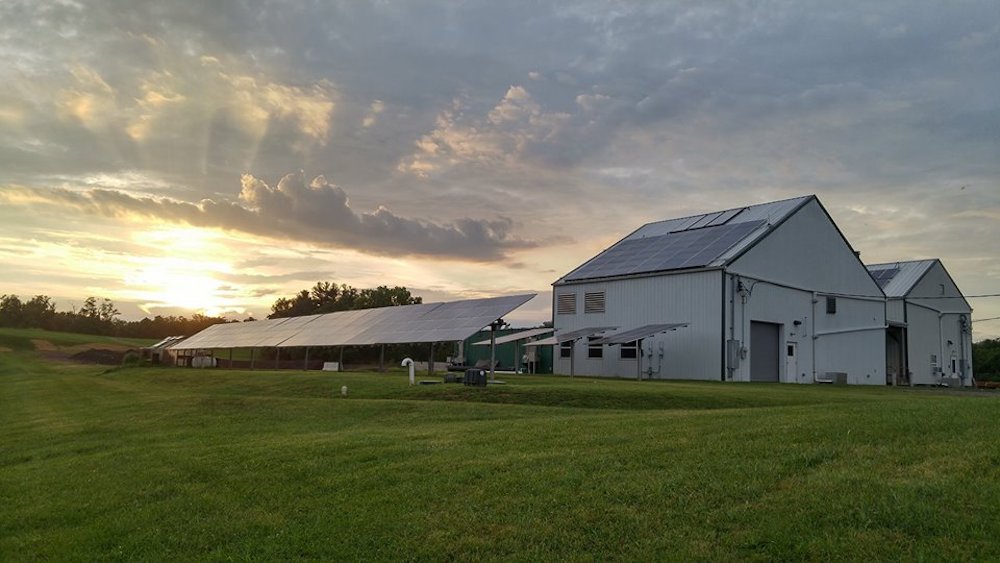 A solar installations at an Ohio University compost facility.

Athens, Ohio, residents will vote in May on whether to place a “carbon fee” on local utility bills to support community solar projects.

Sarah Conley-Ballew, executive director of Upgrade Ohio, an energy advocacy group in Athens, came to energy from a background promoting local and sustainable food, including two years managing the market.

“People want to eat local, they want to know where their food comes from and support the local community,” she said. “It’s similar with renewable energy. For those that are local food minded it’s not a stretch to see how they can support local renewable energy.”

But even people who aren’t locavores or environmentalists see the value in clean energy.

“Lots of independent people — who don’t want to pay the utility a dime — have been early adopters of off-grid systems,” she said.

While Athens is home of Ohio University, it is also in the heart of Appalachian Ohio, with a long history of coal and salt mining. Coal fields in the Hocking River Valley were some of the most productive in Ohio, contributing as much as 40 percent of the state’s output at the turn of the 20th century.

But with the decline in mining jobs, Athens County now has the highest poverty rate in the state. Nearly 1 in 3 residents has income below the federal poverty level.

“The university attracts the young and bright-minded person,” Conley-Ballew said. “It’s an interesting irony that we have such high rates of poverty in spite of having wealth in the city.”

The region’s heritage as a coal producer has turned out to be an asset in some ways.

“It’s wrong to think that this region has only a coal-country mindset,” Conley-Ballew said. “There is a push to be new energy leaders in new ways. We want to generate our own power because we want to be independent from the extractive powers that have made decisions for this region for so long.”

“We want to take the coal and gas-dependent economy and make it renewably based,” she said. “We need a bold and different strategy.”

Thanks to that attitude and leadership from local officials and organizations, Athens County has the most solar power per capita in Ohio.

Conley-Ballew’s group, Upgrade Ohio, was one of over 170 teams selected to compete in the U.S. Department of Energy’s Solar In Your Community Challenge, a $5 million contest “to support innovative and replicable community-based solar business models and programs that will bring solar to underserved communities.”

The group is using technical support funds from the Challenge to study legal issues around creating an investment fund using “crowd finance.” Crowd finance got a boost from the 2012 JOBS Act that loosened up the rules for people who want to invest in business ventures, but are not “accredited.” This means they lack assets of over $1 million and income over $200,000 per year.

The goal of the project is to give regular Athens residents a chance to support local community solar projects on public buildings. The town community center and public library already have solar, but there is much more potential, especially for schools.

Upgrade Ohio is focused on a project at the Federal Hocking Secondary School in nearby Stewart, Ohio. The 1-megawatt rooftop system will be one of the largest systems in the county.

“In addition to the savings, going solar also offers schools an educational component, providing teachers opportunities to incorporate lessons in science, technology, engineering, and math into the curriculum,” Geoff Greenfield, founder of Third Sun Solar, said in a release announcing the project.

The timing of the Solar Challenge was impeccable, Conley-Ballew said, since Upgrade Ohio had already begun exploring community solar development models. “The whole country is in a learning mode on community solar,” she said. “It seems there are as many models as there are shades of grey.”

SOPEC is a community choice aggregation (CCA) program launched in 2014 that procures electricity on behalf of the nine communities that have voted to participate so far. About 350 communities in Ohio are participating in CCA programs. The largest is the Northeast Ohio Public Energy Council, started in 2001, that has 200 member communities.

SOPEC has become a leader in clean energy and may take a big step forward in May if Athens voters approve one of the first “carbon fees” in the country.

In February, the Athens City Council approved the idea of adding a carbon fee of 0.2 cents per kWh to the electric bills of Athens residents in the SOPEC aggregation program. A typical residential customer would pay $1.60 to $1.80 per month, raising around $80,000 per year to install solar arrays on public buildings.

The funds raised by the fee would support community solar projects like the ones Upgrade Ohio is working on. If voters approve the fee, SOPEC will develop the details and launch the program in early 2019.

The idea for a carbon fee came from two separate ideas, according to Eddie Smith, Executive Director of SOPEC.

The first was the desire by some customers — energy locavores — to buy a local solar product rather than the standard SOPEC offering. Athens customers of SOPEC already get power that is 100 percent wind, thanks to the purchase of renewable energy certificates (RECs) from Texas wind farms.

RECs are the proof that electricity was generated with renewable energy. Often electricity is sold separately from the RECs, with the “generic” electricity sold into the local grid and RECs sold to customers who want to support renewable energy. SOPEC’s supplier, AEP Energy, buys generic power from Ohio generators and matches it with RECs from Texas wind farms, as a way to support clean energy.

The second idea was that SOPEC would buy the output from a huge 13 MW solar project, enough for 20 percent of its sales, for all of their customers. The price would be slightly higher but would pay off over time.

But that strategy wouldn’t necessarily be local and wouldn’t facilitate the development of solar in Athens.

“We were responding to customer segments that wanted more local and more solar, and weren’t that satisfied with Texas wind RECs,” Smith said.

Smith pointed out that the proposed carbon fee is only a small fraction of the actual cost of carbon dioxide pollution. Economists working for the U.S. Environmental Protection Agency calculated a “social cost of carbon,” adding up the expected impacts of global warming to arrive at an estimate of $36 per ton of carbon dioxide, or about 2.7 cents per kWh in coal-heavy Ohio.

Spending the carbon fee on solar for city-owned buildings “leads to cost savings in terms of these utility bills for the city, which comes straight out of taxpayer dollars,” Athens Mayor Steve Patterson said at the council hearing.

It will also help Athens cut carbon emissions. Patterson is a member of the Climate Mayor’s Association whose members pledge to act on climate change. “I believe that this carbon fee fits nicely with that,” he said.

The carbon fee also fits in with the City of Athens’ sustainability action plan, adopted last year, and SOPEC’s desire to be CCA leader.

“We are the innovators and leaders on using CCA to increase the supply of renewables,” says Smith. “Whether [the carbon fee] passes or fails, we just want to get the idea out there about what CCAs can do.”