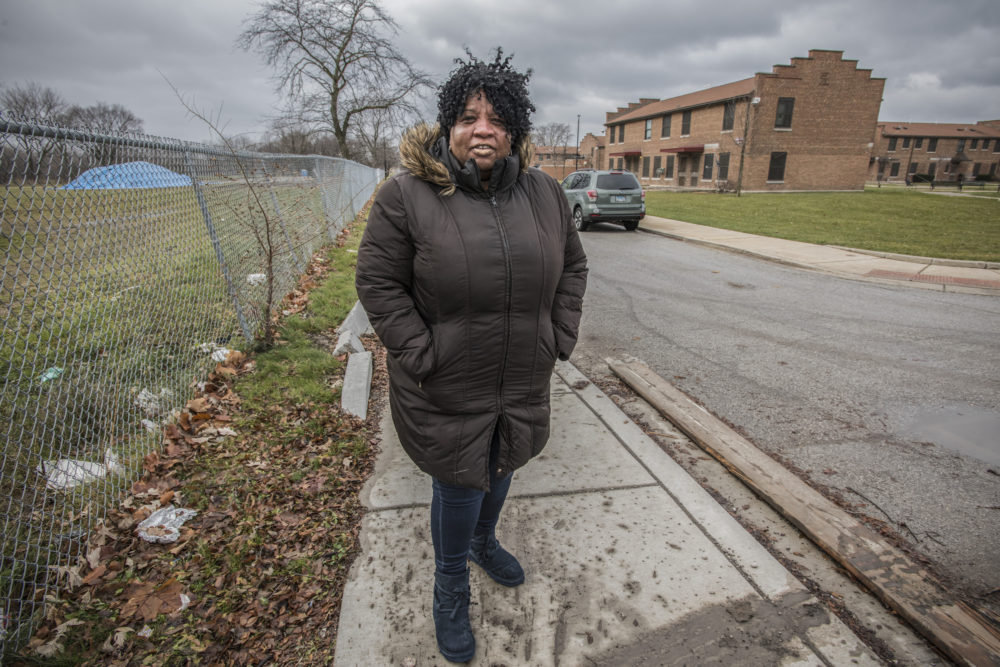 Cheryl Johnson stands between Altgeld Gardens, a public housing complex, and the site of a proposed solar farm in Chicago's Riverdale neighborhood. 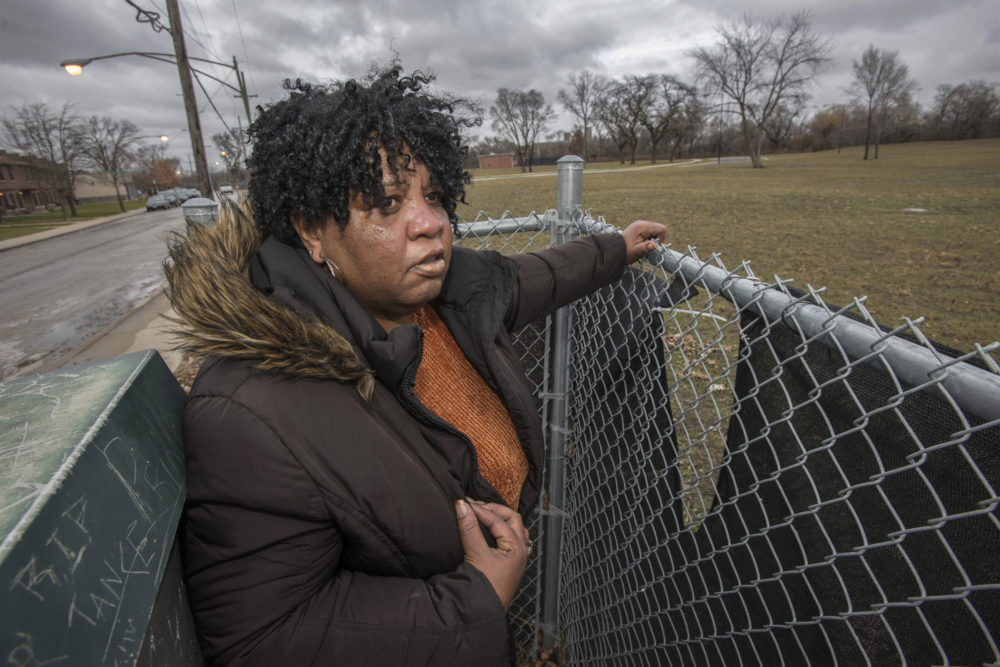 Altgeld Gardens will soon be the site of a city-sponsored green jobs training program and a brownfield solar farm.

After years of community demands for investment, green jobs and development are finally coming to one of Chicago’s poorest and most isolated neighborhoods.

Altgeld Gardens, a sprawling public housing complex home to about 5,000 mostly African American residents, is surrounded by landfills and industry in an area once dubbed Chicago’s “toxic doughnut.”

The past year has brought reasons for hope, though. In May, the Chicago Housing Authority signed a $145,000 contract to develop and execute a solar and energy efficiency training curriculum for residents focused on entrepreneurship and self-sufficiency. Then, in October, the city announced it was seeking a developer to construct a solar farm on a brownfield abutting Altgeld Gardens.

The success is in no small part due to the organizing work of Cheryl Johnson, who runs People for Community Recovery, a local community organization.

“Hard work pays off, right?” Johnson said. “Would this have happened if we weren’t advocating in the area about green opportunities instead of the brown opportunities that currently exists, which are going nowhere economically?” 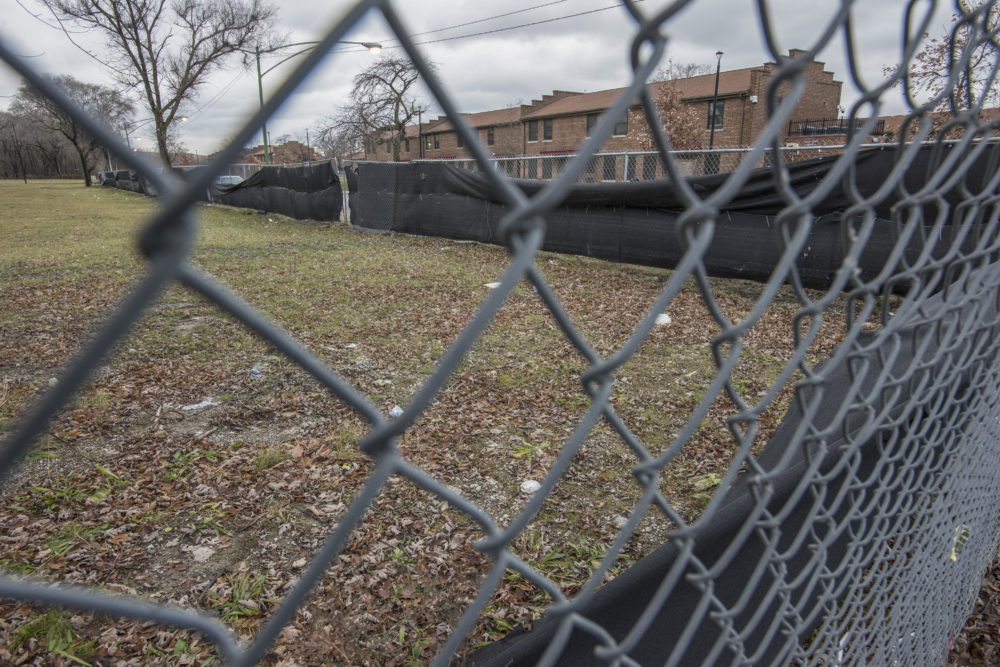 Chicago is seeking a developer to construct a solar farm on this brownfield near Altgeld Gardens. The public housing project, home to about 5,000 residents, is surrounded by landfills and industry.

Altgeld Gardens is located in the Riverdale neighborhood on Chicago’s far Southside, where the unemployment rate is five times the citywide average. Many residents with jobs spend more than an hour commuting each way.

“To be able to holler about these things and to see that the [housing authority] is open to it, and seeing that the city is taking a giant step into sustainability issues, is really cool,” Johnson said. “We are talking about all these things, energy efficiency and solar development and other renewable energy opportunities. It puts us in an opportunity where we say: ‘in the Lake Calumet area, where we live, these brownfield sites have greater opportunity than ever before.’”

The Altgeld project is part of a city initiative to build ground-mounted solar farms on 30 acres of brownfield land on several sites across the city, which include the neighborhoods of Austin, Englewood, West Pullman, South Deering, and of course, Riverdale. And it’s one piece of Chicago’s plan to move all its public housing to being powered by 100 percent renewable energy.

In a statement, outgoing Mayor Rahm Emanuel said: “This project takes vacant land and transforms it into something that will positive for the community, keeping us one step ahead in our commitment to renewable energy sources.”

The city mandated that half of the total construction hours of the solar farms must be performed by Chicago residents, and 7.5 percent of the work from people that live in the public housing and surrounding neighborhoods. The solar program is designed to benefit the community by creating green economy jobs for low-income residents while proving that solar development is economically viable in Chicago.

The city wants to leverage resources and energy from the Future Energy Jobs Act, a massive energy bill that passed the Illinois Legislature at the end of 2016, to spur solar development and jobs training, especially in low-income communities of color on the city’s South and West sides — especially in places in the city that are surrounded polluting industry.

ComEd, the state’s largest power utility, is also throwing some weight behind the measure. In a statement, Fidel Marquez, Jr., the utility’s senior vice president, said that Chicago’s goals and the mandated solar industry growth in the state “creates a unique opportunity for ComEd to encourage and support solar developers to bid on this RFP and future RFP’s that provide solar for all and to further develop a renewable energy workforce in the City of Chicago.” 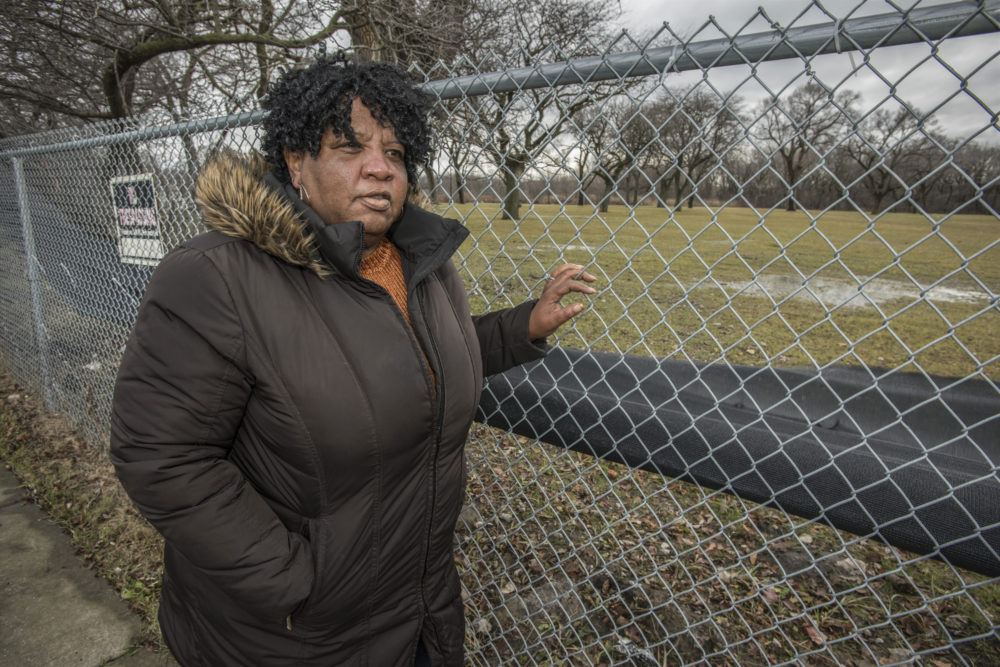 Cheryl Johnson is the daughter of the Hazel Johnson, who founded the People for Community Recovery and has been called the “mother of environmental justice.”

Johnson’s mother Hazel founded the People for Community Recovery decades ago to fight what she called environmental racism in the heavily polluted neighborhood. The elder Johnson has been called the “mother of environmental justice,” and she worked with President Barack Obama when he was a young community organizer in the 1980s. She died in 2011. Her daughter picked up the torch as the leader of the community.

“One of the missions my mother always had was that we find best practices other than the current way to try to reduce our carbon footprint,” Johnson said. “This is one of them that can really improve the quality of life for this area. You know it’s not a lot but every inch, centimeter counts.”

But Johnson is not letting her guard down when it comes to city promises. She said it’s important that the housing authority develop the project and make sure that it benefits the community in the long run. “If they have any energy and assets, then if they decide to sell, the communities should reap those benefits,” she said.

Construction of the solar farm is slated to begin in 2019.  “I’m looking forward in the future to really help with the development of a solar farm for our community and to train some of the residents in the retrofitting and other things that are required to hook it up,” Johnson said.