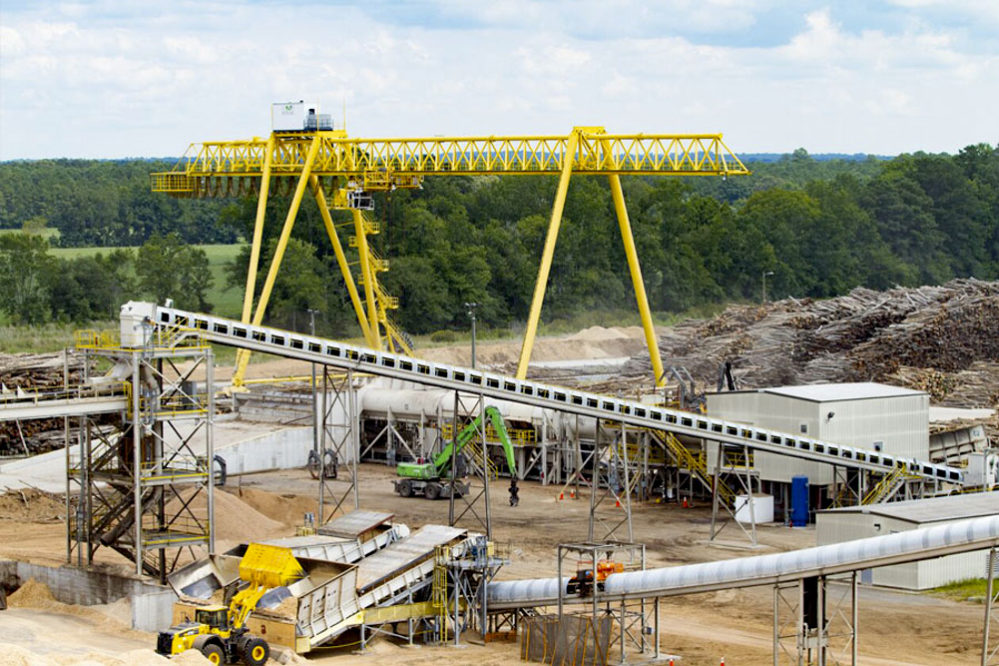 An Enviva mill in Virginia manufactures wood pellets to export to Europe. A similar facility proposed in North Carolina is under scrutiny.

First, North Carolina Gov. Roy Cooper told a congressional committee there were concerns about the growth of wood pellet manufacturing in his state, a top producer of the controversial capsules burned in European power plants instead of coal.

The following day, his environmental agency released a greenhouse gas inventory that takes initial steps to quantify those concerns.

The week’s moves are far from the full-throated rebuke of the large-scale biomass industry that environmental advocates have long sought. But they’re the first faint signs that Cooper and his administration are reacting to pressure from critics who say massive wood pellet production is exacerbating the climate crisis.

Cooper, a Democrat, appeared before Congress on Wednesday to urge federal action on climate and tout his executive order that cuts the state’s greenhouse emissions 40 percent by 2025. His comments on wood pellets came amid questioning from Rep. Bruce Westerman, an Arkansas Republican and biomass proponent.

Cooper acknowledged the strength of the state’s forest products industry, but told Westerman, “I think we have to be careful about going too far with it.” He added that his administration was considering more safeguards, “to make sure that our forests are protected.”

Westerman honed on North Carolina’s wood pellet business and seemed to goad Cooper into endorsing it. “How do you think that’s affecting the health of the forests in North Carolina and the global climate,” he asked, “being able to use those renewable wood pellets to replace coal in Europe?”

The next day the Cooper administration released its final greenhouse gas inventory, a ledger of emission sources such as power plants and sinks such as forests. Though the document falls short of the full accounting of the pellet industry environmentalists had advocated, it inches toward it.

Compared to their draft from last fall, state modelers added more information. In the sink column, they clarified that wood harvested for pellets is considered a loss and assumed to be emitted as carbon. In the emissions column, they acknowledged in an appendix that biomass energy releases a significant source of pollution, but didn’t include it in the overall emissions total (a move, they said, to avoid double-counting).

State officials didn’t attempt to quantify the pellet industry’s direct impact on forests, citing insufficient data, but said they would attempt to correct that in subsequent inventories. And they said a newly formed stakeholder group would help ensure a more transparent and thorough assessment in the future.

‘We’re looking to him to take action’

Among those stakeholders, the forest protection group Dogwood Alliance welcomed the “positive updates” in the greenhouse gas inventory, as well as the governor’s comments before Congress, thought to be his first public statements on wood pellets in the context of global warming. But the group says much more aggressive action is needed.

“I do think that’s a positive note, that he’s acknowledging the concerns and doing so in a federal hearing on climate change,” said Danna Smith, the group’s executive director. But, she said, “the question is what is he going to do about it.”

Advocates want the Cooper administration to delay an expansion bid from Enviva, which owns three large operating pellet plants and a fourth under construction in eastern North Carolina.

To satisfy global demand, the Maryland-based company has applied for permits to increase production to 2.5 million tons per year, which would render the state the largest manufacturer of exported pellets in the country.

Smith acknowledged Cooper may not have strong legal footing to deny the permits outright. But, she said, “we’re at a moment in time right now where we need to be doing as much as we can possibly do to keep emissions out of the atmosphere, and so the governor needs to figure out how he can exercise his administrative authority to delay these permits for this expansion.”

“The governor’s job is to lead right now on climate change,” she added, “and right now he’s failing when it comes to forests.”

If Enviva executives believe their expansion plans are in danger after this week, they’re showing no sign of it.

“We are proud to be a part of the thriving forest products sector in North Carolina, where strong wood product markets encourage private forest landowners to keep forests as forests,” the company said in a statement when asked about Wednesday’s hearing.

“We look forward to our continued engagement with state and local officials on how we can achieve our mutual goal of fighting climate change while protecting our forests.”