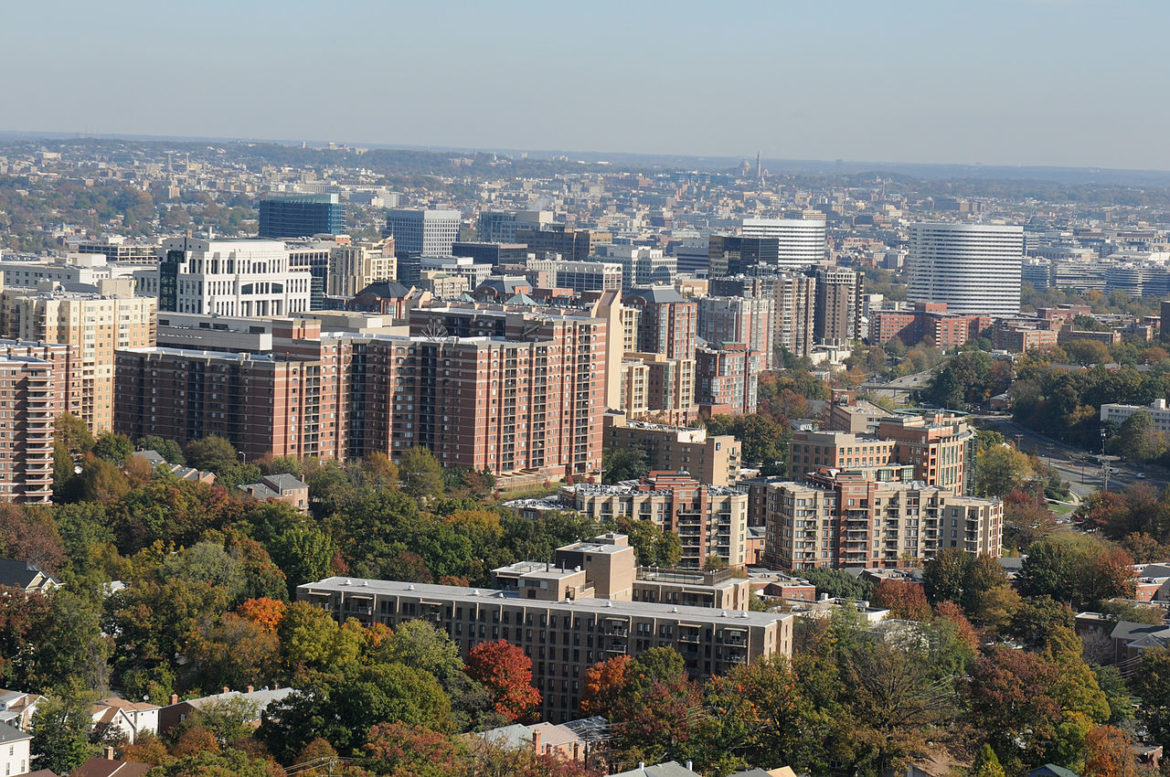 Arlington, Virginia, was the first jurisdiction in the state to pass a PACE ordinance, in 2017.

NORFOLK, Va. — Solar consultant Arthur Fichter IV has no doubt that coastal Virginia’s commercial sector would save millions on utility bills and be richer with arrays if the region had access to long-term financing for clean energy and energy efficiency projects.

He became aware of such a tool for buildings — PACE, or property assessed clean energy — during two recent training sessions in Norfolk and nearby Virginia Beach, both part of an area known as Hampton Roads.

“I was scratching my head along with everybody in the audience, wondering, ‘Why isn’t this happening here?’” said Fichter, an employee of Virginia Beach-based Solar Services, founded in 1986.

In his 12 years with the company, he figures he has lost thousands of potential commercial customers skittish about solar’s upfront costs. PACE coordinates financing with private lenders and costs are paid off over the long term as an assessment on a property’s tax bill.

Virginia is one of 36 states, plus the District of Columbia, to pass PACE-enabling legislation.

The catch is that local governments in Virginia are tasked with crafting an ordinance to establish PACE in their jurisdictions. And that has led to delays.

Fichter backs an effort to push communities in his backyard to follow northern Virginia’s lead by passing a PACE measure.

On a broad scale, PACE’s aim is to slice utility bills and reduce greenhouse gas emissions by making investments in renewables and upgrades to lighting, water heaters, boilers, furnaces and HVAC systems affordable for the commercial and industrial sector as well as farms, nonprofits and multifamily residences.

Another bonus is that the financial note transfers to the new owner when a building is sold.

Nationally, PACE investments have grown from $13 million in 2011 to $883 million today and covered 1,934 commercial buildings. A Virginia project isn’t yet on that list.

The Virginia General Assembly initially passed a PACE law in 2009, but it was widely deemed too complex and unworkable to spur any projects. The law was significantly revised in 2015, opening a trickle of activity since then.

The 2018 Virginia Energy Plan, released in October by Democratic Gov. Ralph Northam, states a goal of expanding commercial PACE programs to at least 12 local governments over the next three years.

Not surprisingly, Arlington County, in more progressive northern Virginia, was first out of the Virginia gate, passing a PACE ordinance in 2017. Nearby, Loudoun and Fairfax counties and the cities of Alexandria and Fredericksburg are following suit.

Still, Arlington isn’t flooded with projects. Its very nascent pipeline contains fewer than 10 projects, none with a definitive timeline.

He has spent the bulk of his time educating developers, building owners and capital providers about PACE because the program is so new, he said.

Lenders can come in two forms — capital providers who work at the national scale, and banks and other financers that operate locally.

“I enjoy what I do because it’s a unique opportunity to build a market from the ground up, but it’s slow,” Dicke said. “I’m anxiously awaiting the chance to close out the first projects because that’s where the magic happens.”

PACE, which has roots in Berkeley, California, was conceived to spur clean energy technology while also squeezing the carbon footprint of buildings. That sector accounts for 29% of U.S. greenhouse gas emissions, according to the Center for Climate and Energy Solutions.

Arlington views PACE as a crucial piece of an ambitious, multipronged Community Energy Plan, rolled out in 2013. The latest iteration, which could pass later this year, calls on non-residential building stock to use 60% less energy per square foot in 2050 than in 2007, the baseline measurement year selected by the county.

Even without PACE, the county experienced a 14% decline in energy use in the commercial building sector between 2007 and 2016 despite an expansion of hotel, retail, restaurant and commercial office inventory.

Rich Dooley, the county’s community energy coordinator, said PACE is appealing to building owners because there are no out-of-pocket expenses for improvements that make a building more valuable.

“The extended payment period makes it a winning solution because property owners want a payback [of lower utility bills] within the first one or two years,” he said.

Maryland on a faster track

Counties in Maryland, Virginia’s neighbor to the north, have been speedier in launching PACE projects since the Legislature enacted a PACE-enabling law in 2014. To date, Maryland has funded 23 projects with $13 million in PACE financing.

“We spent the first two years getting the counties on board,” said Jessa Coleman, programs manager for PACE Financial Servicing.

The Maryland Clean Energy Center, a state-affiliated program, selected Coleman’s company to administer the state’s PACE program. All but four of Maryland’s counties have either adopted a PACE-enabling ordinance or are on the verge of doing so.

“Building a PACE pipeline is a slow, slow path, but what we have in Maryland is meeting our expectation for the time being,” Coleman said. “Once you get to a certain level of scale, there is an almost exponential takeoff. I think we’re on a pretty good growth trajectory.”

One success in Kent County is the $134,408 that a framing shop in Chestertown obtained to upgrade its HVAC system and replace more than 1,000 square feet of “leaky” glass with insulated glass.

Abby Johnson was instrumental for fixing the first iteration of flawed PACE legislation that Virginia rolled out 10 years ago. For the past five years, she has specialized in ramping up PACE financing in markets across the country.

Johnson, the founder of a Williamsburg-based real estate advisory firm that specializes in financing the greening of commercial buildings, also founded the Virginia PACE Authority.

She is hoping the authority will become a nonprofit model for administering PACE programs statewide because she is concerned that private administrators motivated by profit aren’t going to focus on tiny deals that small businesses need.

“The idea with a nonprofit administrator business model is to reach everybody,” she said. “Communities need the local banks on board because they know the mom and pop operations.”

It frustrates Johnson that communities in Virginia’s Hampton Roads have been such laggards about forging ahead on shaping their own PACE ordinances.

“We keep hearing that they are waiting for Arlington County to do a deal,” she said. “This sounds to me like they’re dragging their feet. Someone just needs to go first.”

Virginia’s General Assembly sweetened the state’s PACE pot this year by amending the original statute to add shoreline resiliency and stormwater management to the list of projects eligible for financing. Those extra measures go into effect July 1.

Johnson and others emphasize that shoreline resiliency is a perfect fit for the Norfolk, Hampton and Virginia Beach region where flooding due to climate change is a mounting challenge and hazard.

“Being able to do floodproofing in Hampton Roads is going to make a difference,” Johnson said. “We really hope this is the turning point.”

Is Hampton Roads next?

Dicke said the buzz he’s hearing in Arlington County is that the Hampton Roads area is the “next PACE frontier within the state.”

Fichter, the Virginia Beach solar consultant, is also keeping his fingers crossed that advocates such as the Sierra Club and Virginia Energy Efficiency Council are successful in their press for PACE.

“They fight for the legislation so we can do the application,” he said.

Ideally, he also wants Virginia to eventually adopt a residential PACE program because it would make solar and other energy upgrades a “no-brainer for senior citizens, veterans and those with low incomes who don’t have $20,000 to $25,000 sitting around to invest.”

“The amount of carbon pollution we could reduce would just skyrocket,” he said.

While California, Florida and Missouri have adopted residential PACE programs, watchdogs say it likely won’t expand until measures are in place to prevent predatory lenders from taking advantage of homeowners.

However, Fichter said, even access to commercial PACE would be a game-changer for him and his five fellow solar consultants because of the affordability factor.

“We know PACE works all across the country,” Fichter said. “It’s time that it works in Virginia and Hampton Roads.”

Correction: The Virginia Energy Efficiency Council is among the groups advocating for local PACE ordinances. A previous version of this story misidentified the organization.