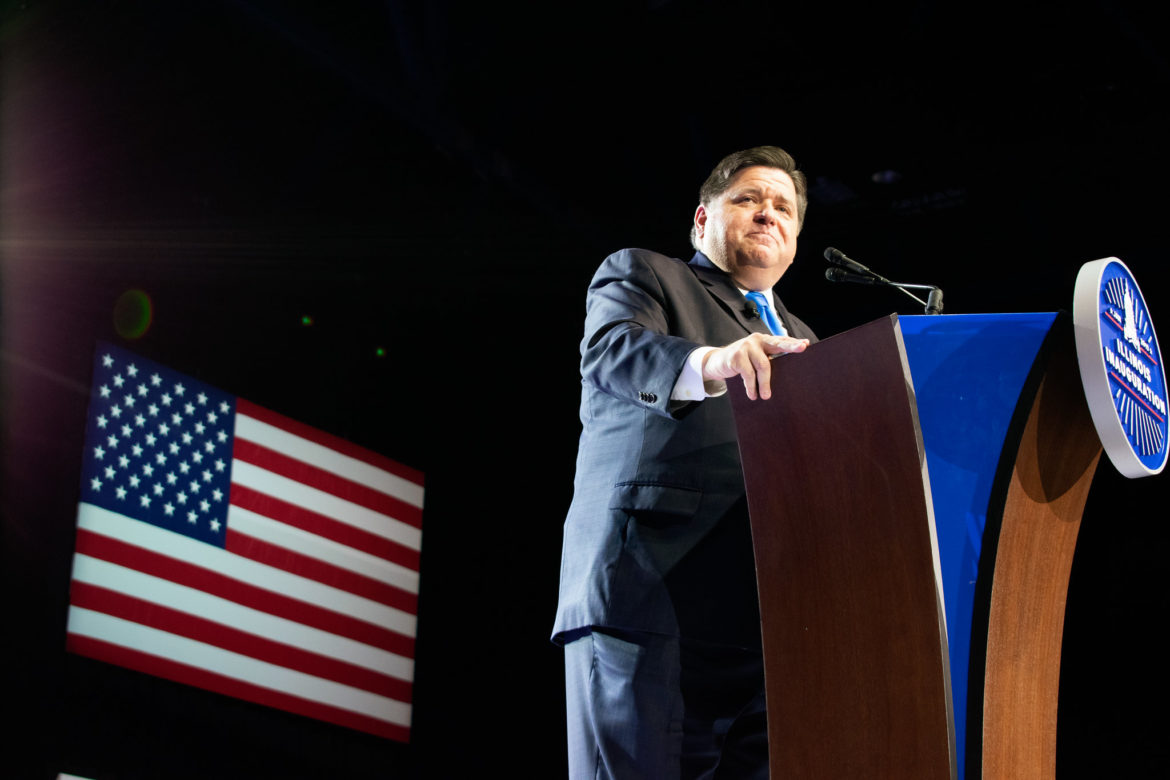 A newly announced energy policy by Illinois Gov. J.B. Pritzker could put an end to a dispute between clean energy advocates and renewable energy companies over capacity payments to the state’s power plants, a schism that has seen them backing competing clean energy bills.

The governor’s plan would likely take a proposal for a state-run capacity market off the table. That concept, part of the Clean Energy Jobs Act and backed by both the Clean Jobs Coalition and ComEd’s parent company Exelon, would prioritize  zero emissions sources in capacity, essentially creating new subsidies for nuclear plants while limiting payments to fossil fuel plants. Theoretically renewables could also benefit from capacity payments, but renewable company leaders said the proposal as drafted would not help them.

The coalition says that a fixed resource requirement, or FRR, that changes how capacity is procured in northern Illinois is key to funding increased residential and community solar and clean energy equity programs, since — they say — it would mean savings on unnecessary capacity payments that could be funneled into the state’s incentive program for solar.

Some clean energy advocates also support Exelon’s requests for more money for its nuclear plants; they worry that if the nuclear plants close, they’ll be replaced by natural gas.

Critics say the fixed resource requirement as drafted would not really save money, and that Exelon’s nuclear plants don’t really need more support in order to keep operating. And solar and wind companies say the proposed requirement would not help them, in part because it would only apply to PJM territory in northern Illinois, not the MISO market downstate. While renewables could technically participate in a state-run capacity market, just as they can in PJM’s capacity market, they say the proposed terms are unworkable.

“We’d love to” participate in a capacity market, said Sarah Wochos, Midwest director of policy and business development for Borrego Solar. “But to do so you have to mitigate the risks.”

The renewables industry backs a bill — called Path to 100 — that does not include capacity reform. It would fund renewable development by raising the cap on what ratepayers can be charged for renewable investments. The Clean Energy Jobs Act would also raise this cap, though initial versions of the bill did not include that provision.

Pritzker’s policy calls for getting Illinois to 100% renewable energy by 2050, and both the Clean Energy Jobs Act and Path to 100 similarly call for transitioning to an all-renewable energy mix. Pritzker also emphasized the need for equity in clean energy, and both bills include equity provisions, with the Clean Energy Jobs Act’s equity proposals being more ambitious and elaborate.

A longtime energy industry consultant who has closely followed the negotiations, and asked his name not be used so he could speak candidly, said the “biggest impediment” to the renewable industry and the Clean Jobs Coalition working together has been the coalition’s “insistence that it’s FRR or bust.”

“If those folks get over the FRR and can sit down and talk about these other principles, there’s a deal to be made here,” he said. “They just have to walk away completely from the ComEd-Exelon construct, but they are yet to do so.”

FRR off the table?

“The proposed FRR has been the centerpiece of current energy discussions, but the first step in that FRR is to annually pay each of Exelon’s nuclear plants an amount equal to three times the current taxpayer subsidy that two Exelon plants already receive without any strings attached and without Exelon showing us their math as to why this is necessary,” Pritzker’s plan says. “They are asking us to take their word for it without providing the relevant financial statements for each plant.”

Instead of an FRR, Pritzker called for exploring market-based options that take into account the social cost of carbon, “including long-term damage from CO2.” His plan suggests a carbon tax or a cap-and-trade system similar to the Regional Greenhouse Gas Initiative in the Northeast, and says that “Illinois can lead the Midwest by pricing the dirty energy that we plan to phase out.”

Renewable industry companies lauded the governor’s announcement, including his position on the FRR.

“The FRR issue is a big sticking point for the industry; it’s the main sticking point frankly — we align on almost every other aspect,” said Shannon Fulton, vice president of development for StraightUp Solar, which develops residential and community solar in Illinois. “It’s really hard to be able to provide any kind of certainty to the renewable energy industry in Illinois based on an FRR. To a company like ours, it’s rather nebulous and it’s not something we could necessarily wrap our arms around and understand what impact it will truly have on the market and on consumers.”

Natural Resources Defense Council Illinois clean energy advocate J.C. Kibbey, a member of the Clean Jobs Coalition, said capacity market reform remains central to the coalition’s goals, but they would consider backing legislation that does not include it.

“We’re paying fossil fuel generators a lot of money for power we really don’t need. We need to make sure that Illinois consumers’ money is going towards a clean energy future,” Kibbey said. “The FRR is one way to accomplish that. We’ve always been looking for a solution that prioritizes climate, equitable recovery, and good jobs. The FRR seemed like the best one, but we’ve always been not ideologically wedded to one solution.”

Parties on all sides hope that legislation can be passed in the state’s brief legislative veto session in November, or a lame duck session in January, in order to refresh funding for residential and community solar development that has been nearly depleted after a nascent solar boom.

While the corruption scandal seemingly chills the political power that ComEd and Exelon might have had to help pass clean energy legislation, some clean energy advocates described it as a refreshing chance to push legislation without major corporate backing.

“It’s always been a reluctant partnership to get this work done. … We’ve been told whenever we need to pass an energy bill that the only route to passage was working with utilities and certain energy companies,” said Jen Walling, executive director of the Illinois Environmental Council, a Clean Jobs Coalition member. “That was the reality we had to work under, but there was never any group that relished or wanted to do so. [Now] we are excited about getting the chance to pass a bill that’s not written by utilities, that has the best policy for consumers and equity.”

Walling added that “political corruption has plagued the energy sector for decades in Illinois.”

She described the existing PJM capacity market as shaped by undue influence from the fossil fuel industry on the federal level, hence the Clean Jobs Coalition’s calls for capacity market reform. But given Pritzker’s announcement, she said the coalition might back legislation without a fixed resource requirement.

“We do need to address the capacity market but we may do it in a different way,” she said. “If we’re going to achieve our clean energy future, those [nuclear] plants need to stay open. I certainly don’t want to bail them out, but I don’t want them to close either. We’re going to have to look at solutions that allow them to stay open, even if they’re not raking cash in for their shareholders. They have to stay open or they will be replaced by coal or natural gas.”

David Kolata, executive director of the Citizens Utility Board of Illinois, said that he didn’t interpret Pritzker’s plan “as excluding the FRR entirely.”

“Obviously they want to take a hard look at other options, including carbon pricing,” he said. “From CUB’s perspective, we’re looking to achieve the cheapest way to 100% clean energy the fastest. We think the FRR as we designed it did that, but we’re open to other proposals too.”

Kolata said the group is interested in exploring carbon pricing and even a proposal made by the AARP to re-regulate Illinois, so that utilities would build generation including renewables rather than energy being purchased on the market.

“We want to weigh the options and costs and benefits,” Kolata said. “From a consumer point of view, we have to just make sure we’re not hitting consumers with higher bills and higher rates. [Low energy prices are] a competitive advantage we’ve had as a state. We think it’s really important to build on that.”

Stakeholders will spend coming weeks in working groups mulling the specifics of renewable funding mechanisms, carbon emissions reductions and other details of possible legislation. Kibbey said he’s hopeful that a revised bill can be hashed out before the veto session, given the conversations that groups and experts have been having for more than a year already — though it won’t be easy.

“The governor’s approach centers pricing a bit more as a way to reduce emissions,” Kibbey said. “The coalition has some questions about whether that can be done equitably. We’ll be asking those questions in the working groups.”

Pritzker’s announcement addresses this, noting: “Some advocates have concerns that a market-based approach to carbon pricing will result in more-polluting plants being able to operate longer because they will be able to pay their way out, and will allow them to continue polluting communities that are already disproportionately experiencing the impacts of climate change. However, we know that there are ways to structure a carbon pricing program to make sure that this does not happen, and we are committed to achieving that principle in any program that we design and implement.”

The energy consultant said he believes renewable companies would likely support market-based systems like cap-and-trade or a carbon tax, but there has to be a revenue stream for projects that starts right away since it’s going to take a while for a carbon stream to get up and running. “How does a cap-and-trade system provide funds for renewables?” he said. “The devil is in the details.”

Fulton hopes that a narrower bill relying on the raised rate cap for renewables funding could be passed before a more ambitious market-based plan is worked out.

She said StraightUp Solar has been “holding the line” with 80 employees in Illinois since the pandemic and the draw-down of funds — particularly for community solar — under the solar program created by the Future Energy Jobs Act.

“Our company is fortunate to do about half of our business on the residential side — the REC [renewable energy credit] funding for residential is still there, but it’s quickly depleting as well,” she said. “We’re very much worried about what impact that will have.”

If funding disappears for Illinois’s residential solar credit program, she said, “we will have lost both of our oars” — with funding already gone for community solar credits. “And it will certainly be a challenge to continue in this industry.”

“He recognizes the crisis we’re facing, and that renewables are the future,” she said. “I’m very optimistic.”