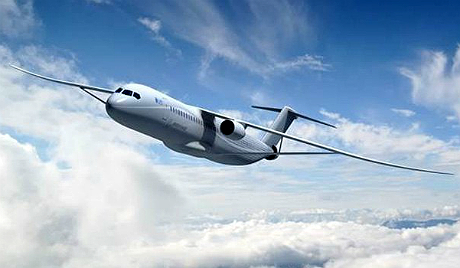 Ever since he was 6 years old, Jon Gibbs has been fascinated with aircraft.

But while toy planes seemed pretty cool to him as a kid, Gibbs now thinks he’s onto something more significant, and literally cooler: cryogenic aircraft fueled by liquefied natural gas.

Unlike conventional, oil-based jet fuel, super-cooled LNG is condensed from simple methane gas and sells for a fraction of the price.

Gibbs thinks the cleaner-burning fuel could be the biggest innovation to hit aviation since the development of the jet engine more than a half-century ago. And the aircraft designer, former Boeing employee and recent Massachusetts Institute of Technology graduate hopes he can lead an industry shift toward LNG through his new company.

Gibbs’ inspiration came from a chemistry course in 2009, on the cusp of the U.S. shale drilling renaissance that sent nationwide gas prices plummeting. He teamed up with a few other MIT students to study alternative aviation fuels, and initially assumed hydrogen would be most promising.

LNG proved him wrong, he said.

“The results were so good for LNG; that’s when I sort of went crazy,” he recalled. “It would open up a market that would save at least $100 billion in fuel over the next 50 years.”

Gibbs thinks LNG could fuel 5 percent of new planes by 2035 — much faster than Boeing’s forecasts.

The researcher-turned-entrepreneur spun off his tiny company, Savion Aerospace, while applying for the MIT Clean Energy Prize in 2011 with a few other colleagues. (The name Savion tacks an “S” for “super” onto “avion,” the French word for plane.)

For now, Savion is still caught in what Gibbs calls “grant land”: trying to find enough funding to prove the concept works.

Aircraft manufacturers face enormous pressure to get it right the first time when rolling out any new model, from both a safety and financial perspective. Battery troubles temporarily grounded Boeing’s entire fleet of new 787 Dreamliner planes earlier this year (Greenwire, Feb. 22). The investment risk of switching en masse to an all-new fuel like LNG would be enormous without enough real-world test flights backing up the technology.

Gibbs said he has identified a “niche market” customer interested in his plan, which involves designing a specialized airframe for LNG aircraft. He intends to use an existing engine design to cut down on research and development costs and regulatory delays.

And while his company may not be large, its core idea has gained traction across the globe.

“Based on my industry contacts, there is some serious interest among experts working for the major aircraft manufacturers,” said Graham Dorrington, an English aeronautical engineer who lectures at RMIT University in Melbourne, Australia. “But it may take some time for that interest to gain deeper and wider industry acceptance.”

Dorrington supervised a team of RMIT students who earned second place for their LNG concept in Airbus’ “Fly Your Ideas” international design competition in June. He said he sees vast potential for the odorless, colorless liquid to replace kerosene as a jet fuel.

“If LNG is not considered alongside alternative drop-in solutions as a future aviation fuel in the near future, then the whole aviation industry must have become complacent or entrenched,” Dorrington said in a recent email exchange.

Concerns about industry foot-dragging drove Gibbs to start Savion and try to break free from what he sees as an endless cycle of research without action.

“When I left Boeing [in 2008], people were concerned about the price of jet fuel,” Gibbs said, noting that designers and manufacturers must “fight this war” between the cost of fuel and the cost for traveling.

“Building a new plane and new infrastructure is difficult conceptually — it’s hard to think about,” Gibbs said. “But it’s actually cheaper than the alternative” of staying with kerosene.

Passengers often complain that planes’ cabins are kept too cold.

But they would really need to pile on the fleece airline blankets if they sat too close to LNG storage tanks, which must keep their super-cooled cargo at about minus 260 degrees Fahrenheit.

Of course, no one is suggesting trying to squeeze an LNG tanker into an empty seat with extra legroom.

But experts think LNG tanks could fit in unused space in the fuselage, the main, typically cylindrical body section of an aircraft.

Ron Kawai, an aerospace engineer with Boeing Research & Technology in Huntington Beach, Calif., said he sees potential for a “blended wing body” design, which can store large volumes of LNG in the transition area between the center body of a plane and its wings.

In some ways, Kawai’s concept mirrors dual-fuel natural gas/gasoline vehicles that have cropped up in the automotive sector as a way to transition toward natural gas (EnergyWire, Aug. 9).

Planes have the added challenge of getting off the ground safely and efficiently. But LNG’s subfreezing properties could actually be an advantage if paired with another future technology, Kawai said in an interview this week.

Boeing has also researched the possibility of so-called superconductors, a nascent technology that would reduce electricity losses in an airplane’s internal circuitry. The efficiency improvements could make electric and hybrid-electric planes competitive with their conventionally fueled counterparts.

But such superconducting systems would need to be kept at extremely low temperatures — about minus 280 F — to work efficiently.

“If you already have LNG, then the cryogenic temperature is low enough for high-temperature superconducting materials. … There could be some synergistic [effect],” Kawai said.

Storing complex, cryogenic fuel chambers on an airplane may sound like science fiction. But LNG was already used as a jet fuel in the Soviet Union three decades ago.

Russian aerospace and defense giant Tupolev tested LNG-fueled aircraft as an offshoot of hydrogen-powered aviation experiments that began in the 1970s.

The program fizzled out for a number of reasons, not the least of which was the collapse of the Soviet Union in 1991.

Now LNG has enjoyed a revival of sorts, buoyed by booming U.S. gas production that is forecast to continue for several decades (EnergyWire, July 26). The idea has drawn interest from giants such as Boeing, Lockheed Martin and NASA.

The team’s May 2012 report listed some of the pros and cons of using LNG as a future fuel for the 2040-2050 time range, comparing it to other technologies such as hydrogen and hybrid battery-gas turbines. The report cautioned that it would be “premature” to conclude that any of the concepts will make their way into Boeing’s commercial lineup, but Marty Bradley, Boeing Research & Technology’s principal investigator for the SUGAR team, said LNG stood out as a promising option.

LNG “seems like it’s definitely feasible,” Bradley said in an interview Monday. “Its efficiency is greater [than conventional fuel], you’re able to clean up the greenhouse gas emissions, and you get a cleaner-burning fuel, as well,” with less sulfur and particulate content.

Bradley said he is confident that such practical problems can be solved, especially if natural gas weaves its way into the market through the U.S. military or other specialized customers.

“In general aviation, they can do a lot of neat things with these alternatives much more easily than we can,” Bradley said.

Although Aviat’s alt-fuel prototype uses a separate technology than LNG, “it gets people used to using natural gas in aviation, so there’s some value in it,” he said.

Fire, water and other hurdles

Gibbs acknowledged that there are still some technical and safety hurdles for LNG to overcome.

For one, any new aircraft design would have to undergo about five to seven years of testing from the Federal Aviation Administration and other agencies.

LNG is also imbued with some unusual properties.

The liquid reacts violently with water, for instance, so it could be more dangerous than conventional jet fuel in the event of a waterborne crash.

On the other hand, LNG evaporates quickly when exposed to ambient temperatures. If a fuel tank were punctured in a land crash, LNG wouldn’t pool dangerously on the ground like kerosene. It could still ignite, although it has a higher ignition temperature than jet fuel.

“[Safety] is definitely one of the key challenges to using one of these fuels in aviation,” said Bradley of Boeing, noting that “we can’t just do it and put it on a commercial jetliner.”

However, “we think we have the technology to make [LNG] have equal safety on par with jet fuel, which is quite hazardous in itself,” Bradley added.

As he awaits word on funding, Gibbs can find comfort in the fact that the barriers to LNG come more from curable safety concerns than from technological flaws. In the meantime, he thinks the economic advantages — up to 50 percent fuel savings after factoring in infrastructure costs, he estimates — will speak for themselves.

“Natural gas in this country has its own pricing that’s immune from OPEC — and it’s clean,” he said. “I think we’re in a good position.”