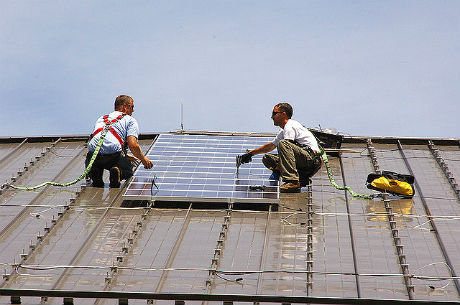 The Iowa Supreme Court ruled July 11 that a solar installation atop a municipal services center in Dubuque does not violate Iowa law, a decision experts called potentially ground-breaking for the spread of rooftop solar power.

“This is a great win for Iowa,” said Brad Klein, a senior attorney with the Environmental Law and Policy Center (ELPC) who represented a collective of renewable energy advocates from Iowa and across the country. Given the thoroughness of court’s decision, and the lack of any other high court rulings in this arena, Klein said he expects the Iowa court’s ruling to be “very influential” in future legal decisions nationwide, as well as “a great guidepost for conversation across the country.”

Joe Bolkcom, an Iowa state senator who has worked hard to advance renewable energy, called the ruling “a very positive decision for the advancement of solar in Iowa. I hope it provides a rationale for the Iowa Utilities Board to make some good decisions about distributed generation.”

The board early this year solicited feedback about the future of rooftop solar and other forms of distributed renewable energy. It recently requested additional comments, and now is mulling over its next move.

“If there’s more deployment of solar in Iowa, [legislators] are going to be more inclined to make policy that advances distributed generation,” he said.

Eagle Point Solar, based in Dubuque, installed a 175-kilowatt system on top of the Dubuque city building in 2011. Alliant Energy, the electric utility that serves the city, appealed to Dubuque’s city council, then to the state’s utility regulator, claiming that the project would violate the law. Alliant argued that Eagle Point would be functioning as a utility, and thus impinging on the utility’s legal monopoly over electrical service in Dubuque.

The Iowa Utilities Board ruled that Eagle Point was, in fact, functioning as an illegal utility. The ELPC  and other renewables advocates appealed to the Polk County District Court, which in 2013 reversed the regulator’s ruling. The Iowa Supreme Court then opted to review the case.

Eagle Point’s president and CEO, Barry Shear, was busy hosting out-of-town visitors on Friday. He found just enough time to say, “There’s nothing not to like about this ruling unless you’re a coal miner in Virginia or a utility in Iowa.”

The case basically turned on a funding mechanism known as third party power-purchase financing. In that model, an installer/developer builds a solar energy system on a customer’s property at no cost. The solar energy system offsets the customer’s electric utility bill, and the developer sells the power generated to the customer at a fixed rate, typically lower than the local utility.

Meanwhile even many people or institutions who can collect tax credits have trouble coming up with capital to install solar panels. Tim Dwight, a solar developer in Iowa, said that the typical residential solar installation now costs in the neighborhood of $16,000. Although almost half of that could be covered by the federal and Iowa state government credits, the remaining funds can be a barrier for homeowners or business owners; and banks are often reluctant to make loans for solar installations. Hence third party financing can be crucial for a wide range of solar and other renewable applications.

Klein predicted that the court ruling “will open up [solar] to a broader set of Iowans. It’s been very successful in opening up solar in other states. I think this is one of those baseline policies that lays the ground for solar growth.”

The ruling came on the heels of a recent tripling of the state’s renewables tax credit; and renewable advocates also hope the utility board’s ongoing inquiry into distributed generation will yield positive results.

“All of these things collectively in Iowa are going to give the industry the boost it needs,” said Klein. “We expect great things in Iowa.”

Officials at Alliant Energy, which has lost nearly 600,000 kilowatt hours in sales to the City of Dubuque since the solar panels started producing in 2012, have mixed feelings about today’s ruling, according to spokesman Justin Foss. “It’s been painted that this is a fight between the utility and renewable energy,” he said. “It’s anything but the truth.”

Foss said Alliant maintains “unwavering” support for renewables, and for integrating them into the utility’s distribution system.  There are now about 670 renewable energy generators on Alliant’s system in Iowa, “and more people asking to connect to the grid every day,” Foss said. He added that customers will still be reliant on power provided by Alliant when the sun isn’t shining or the wind isn’t blowing.

“We have a financing model that hasn’t changed,” he said. “If nobody’s buying energy, in the middle of the night, there’s no one to pay for the power plant. We have two sets of generation. The problem is, there are lots of costs involved. What wi

ll be the impact on our customers? And how will this affect their costs?”

Klein acknowledged that the growth of distributed generation raises tough issues for utilities.

“One of the important aspects of the case is that it says that the purpose of utility regulation is to protect the public, not the utility industry,” he said. Generating one’s own power “behind the meter” — meaning it doesn’t move through a utility’s distribution system – is a private transaction and should not be subject to interference by a utility, Klein said.

Even so, he said this ruling clarifies the need for utilities and the renewable energy advocates to collaborate.

“We can’t have policies that single out customer generation and try to kill it,” Klein said.

On the East Coast, he added, “There are conversations beginning on how the electric utility industry transitions to a system that’s more decentralized. We want to see these conversations happen in Iowa and the Midwest. We want to work with Alliant on approaches that are win-win.”