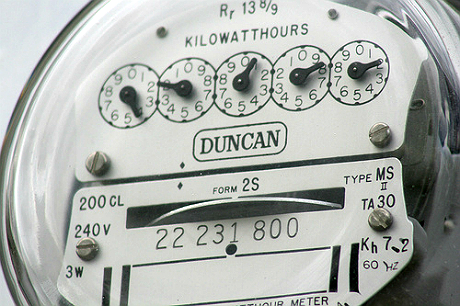 While separate line items on electric bills will soon show how much Ohioans pay to meet the state’s energy efficiency and renewable energy standards, other fees will remain lumped into overall distribution charges.

Meanwhile, utilities hope to add yet more riders to customer bills in order to guarantee sales for affiliated power plants.

SB 310 freezes target levels and weakens Ohio’s clean energy standards in several respects. It also established an Energy Mandates Study Committee to review the charges and consider whether the standards should continue.

In December, PUCO chair Thomas Johnson testified not only about the renewable energy and energy efficiency charges, but also about a wide range of additional riders lumped into customers’ bills.

‘Under a magnifying glass’

A PUCO ruling last month says utilities should state that charges to comply with renewable energy and energy efficiency are not new. However, the disclosures will only appear on the first three bills once the charges are broken out.

Even with that statement, however, environmental and consumer advocates say that a break-out on bills for just the costs for renewable energy and energy efficiency won’t give customers a complete picture.

For starters, bills will only itemize costs for the standards and not any benefits that customers can reap. Ohio utilities have previously represented to the PUCO that, as a whole, the standards save customers twice what they cost.

Beyond this, singling out just the renewable energy and energy efficiency charges puts them “under a magnifying glass,” said Dan Sawmiller of the Sierra Club’s Beyond Coal program. In other words, customers might focus only on those extra costs—without realizing that they also pay for various other charges and fees.

“It is a huge consumer issue because folks should know what they’re paying for,” said Trish Demeter at the Ohio Environmental Council.

“There are many riders, and they are different for each utility,” noted PUCO spokesperson Matt Schilling. “The easiest way for a customer to learn about which riders they pay and how much is by examining the company’s tariffs.”

The PUCO publishes tariffs on its website. Utilities’ websites publish their tariffs and identify riders as well.

However, customers may not realize that unlisted riders are lumped into their electric bills. Even then, few probably ever bother to look up and review specific company add-ons.

Last year, Sawmiller presented a chart of American Electric Power (AEP) riders as part of his testimony before the Ohio Senate Public Utilities Committee. The chart showed charges to residential customers for 15 riders in addition to renewable energy and energy efficiency.

Most of those other riders cost customers more each month than either renewable energy or energy efficiency.

“You can see how it pales in comparison to all these other riders, most of which don’t show up [itemized] on your bill,” said Sawmiller.

Some riders cover costs that both utilities and various environmental advocates support. Examples include costs for improvements to maintain and modernize the grid.

“It’s a mechanism for the recovery of costs from customers between rate cases that allows the utility to capture lost distribution revenues, which occurs as a result of state-mandated cuts in energy consumption,” explained FirstEnergy spokesperson Doug Colafella.

Demeter, however, characterized it as “straight-up a charge to compensate [utilities] for lost sales because people are being more efficient in their energy use.” In other words, the charge pays utilities to make up for electricity they didn’t sell because customers wasted less electricity.

“That, to me, screams ‘subsidy,’” Demeter said.

Letting utilities get lost distribution revenue may have been appropriate “in a transitional period,” Demeter noted. In that transition, she explained, utilities would have refocused their business model from selling as much electricity as possible to providing service so customers can use energy responsibly.

“But they’re still charging this,” Demeter said. “It just doesn’t seem fair to me that customers have to continue to pay that. It’s just basically a direct payment from the customers to the shareholders.”

The PUCO’s December order says bills’ breakouts for energy efficiency costs should not include lost distribution revenue. Nonetheless, utilities still will be able to collect the money, and the amount won’t be itemized on customers’ bills.

Basically, utilities can offer discounted rates to those customers. Utilities then make up the difference, or “delta revenue,” from the rest of the rate base.

“Keep in mind that reasonable arrangements/delta revenue recovery are economic development riders created by the state of Ohio,” FirstEnergy’s Colafella explained. “If customers are charged delta revenue, it’s not a new charge, just a shifting of costs from one customer to other customers through a rider on utility bills.”

Yet while the utilities come out “even,” residential customers and others wind up paying for the large customers’ discounts.

Basically, Demeter said, other customers are “paying to subsidize the rates of these large companies.” And advocates question whether those other customers benefit at all.

“The companies that get this economic development money make no enforceable commitment,” Sawmiller said.

At the same time, large companies in Industrial Energy Users—Ohio objected strongly to the renewable energy and energy efficiency standards.

Yet energy efficiency provides “real cash savings” for all customers, Sawmiller said. Those who waste less energy save because they don’t need to buy as much electricity. And all customers save as a result of lower capacity charges and the avoidance of new generation to meet peak demand.

“Renewable energy has societal and environmental benefits that far exceed the cost of what you’re paying for” under the rider, she said.

The job market has also grown substantially in Ohio’s clean energy industry. A report by independent researchers found that the industry had more than 31,000 jobs as of 2012.

Customers will pay for still more riders if AEP, Duke and FirstEnergy succeed in getting the PUCO to approve proposed power purchase agreements.

Utilities say the plans will provide rate stability and pay off for customers in the long run. Opponents argue that the plans are “bailouts” that favor utilities’ corporate affiliates in violation of Ohio law and at the expense of consumers.

By law utilities need to show a benefit to consumers for any “electric security plan,” noted Nathan Rutz at the Ohio Organizing Collaborative. However, testimony on behalf of FirstEnergy admits consumers will pay approximately $400 million in three years under its plan to guarantee sales for all electricity from certain coal plants and the Davis-Besse nuclear plant.

Conceding the absence of any savings in the plan’s first three years is “already admitting that it’s essentially illegal,” Rutz said. And the company’s figures are probably optimistic, he added.

Indeed, opponents say the actual costs are likely to be much more.

Last month, in testimony by the Office of the Ohio Consumers’ Counsel and Northeast Ohio Public Energy Council, economist James Wilson estimated that FirstEnergy’s plan will more likely cost customers between $3 billion and $4 billion over the course of the 15-year power purchase agreement.

Local hearings on FirstEnergy’s plan continue this week and next in Toledo and Cleveland. Cases for plans for Duke Energy and AEP remain pending too.

If approved, electric charges would include yet another rider. And the amount would not be broken out separately on customer bills. For FirstEnergy customers, for example, the rider would be lumped into an already existing “cost recovery charge.”

“Why would we ever think about bailing out coal plants?” Sawmiller said. “What are you getting for it?”

“Ohioans are already paying enough for energy,” Rutz said. The idea of giving FirstEnergy and other utilities “more money for free is pretty bad,” he added.

The Sierra Club and Ohio Environmental Council are members of RE-AMP, which publishes Midwest Energy News.