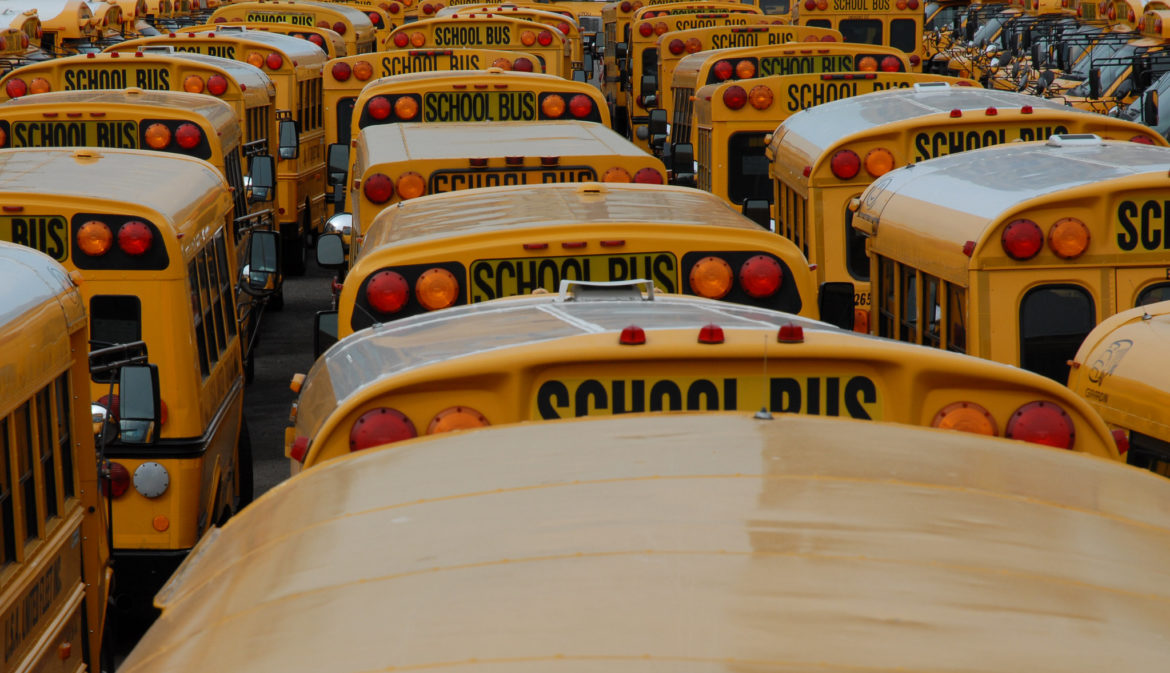 Grassroots organizations in Virginia are pushing state lawmakers to fill a "gap" in Dominion Energy's electric school bus program. They've countered the utility's proposal with their own bill, which aims to further accelerate the replacement of diesel buses.

An alternative proposal would provide money for a massive diesel-to-electric conversion across the state.

Environmental advocates in Virginia are not opposed to legislation backed by Dominion Energy to replace 1,050 dirty diesel-powered school buses in the utility’s territory with clean electric models by 2025.

Some just figured electric buses could be rolled out in a faster, fairer and farther-reaching fashion than the utility-centric measure, Senate Bill 988, now pending before the Virginia General Assembly.

So grassroots organizations have countered with their own bill that addresses their chief concerns of climate change and children’s health by offering a pot of money for massive diesel-to-electric bus conversions by 2030 to school districts both in and beyond Dominion’s territory.

“On the whole, electric school buses, no matter how we get them in the state, are awesome,” said Bobby Monacella, co-leader of the Fairfax County chapter of Mothers Out Front. “But we saw a gap with the Dominion program and this is how we wanted to fix it. We want schools to be thinking about a plan.”

Monacella’s group helped Del. Mark Keam, a Fairfax County Democrat, draft House Bill 1140, which was introduced on Jan. 8. The measure, championed by an array of green groups, would allow school districts to tap into a new block grant program administered by the Department of Education to pay for the difference between a diesel and a more expensive electric bus, and the necessary affiliated charging infrastructure.

As well, Keam’s bill prioritizes bus replacements in school districts with high rates of air pollution and asthma. An amendment to the yet-to-be approved state budget for 2020-22 would fund HB 1140 at $5 million annually.

Dominion-focused SB 988 was introduced Jan. 15 by Sen. Louise Lucas, a Democrat representing part of the Hampton Roads metropolitan region. It expands by 1,000 the Richmond-based utility’s first bus replacement phase, initially announced in August. That starter plan calls for putting 50 electric buses on the roads in 16 communities by the end of the year. Dominion has selected Thomas Built Buses as the vendor for phase one.

Those 16 localities — from Alexandria to Waynesboro, alphabetically — are all within Dominion’s service area. While the utility touts the program’s environmental, health and cost-savings benefits, Dominion is clear that the electric buses are first and foremost a grid resource. Schools are selected based on the value of batteries to the local grid. Bus batteries will serve as energy storage to support the integration of distributed renewable energy.

“The vehicle-to-grid technology leverages the bus batteries to store and inject energy onto the grid during periods of high demand when the buses are not needed for transport,” Dominion wrote in a January news release announcing the chosen communities.

Putting 1,000 additional electric school buses online by 2025, as called for in phase two, would provide enough energy to power 10,000 homes, according to Dominion. Phase three’s goal is to replace all worn out diesel buses with electric models by 2030. That goal applies only to buses in the utility’s footprint and does not mean that the entire bus fleet would be electrified within that window.

Del. Kaye Kory, a Democrat who represents the Falls Church part of Fairfax County, pre-filed legislation last December to cover Dominion’s 50-bus pilot project. HB 75 states that program costs, including the incremental cost of the electric school buses, are recoverable through the utility’s base rates. The initial deployment is limited to $13.5 million, while the phase rollout through 2025 is capped at $54 million annually, according to the bill language.

Back in August, utility watchdogs questioned Dominion’s authenticity when it announced its electric school bus initiative at the same time that the State Corporation Commission released a report revealing that the utility had amassed $277.3 million in overearnings during 2018.

Consumer advocacy groups wanted Dominion to refund customers. However, the utility has said it would direct the excess profits toward wind and solar projects, energy efficiency and upgrading the electric grid. Those diversions are permitted under the state’s landmark — and controversial — Grid Transformation and Security Act, passed in 2018.

The nonprofit Southern Environmental Law Center, which did not have a hand in writing the school bus conversion bills, is watching all of them.

“Should we be getting rid of dirty diesel as soon as we can? Yes,” said SELC senior attorney Trip Pollard, who tracks transportation issues. “But we need to be asking if Dominion should be the only one doing it and should they be profiting from it.”

Chief among Pollard’s concerns: Will there be adequate oversight of Dominion’s cost recovery? Should Dominion be able to purchase, own, manage or control the electric buses? How will fairness and equity issues be addressed if only school districts in Dominion’s territory are included?

“I have no problem at all with the small pilot that Dominion has announced,” Pollard said. “But these are the kinds of questions that need to be carefully thought through so we get something that is in the public’s best interest and does the most we can about the most important objectives — children’s health and the environment.”

With more than 1,700 bills filed in the House and 1,000-plus in the Senate, Pollard can’t predict when or if electric buses will receive any air time before the 60-day General Assembly session plays out in early March. None of the bills has had a committee hearing yet.

“Most legislators haven’t even thought about this issue yet,” Pollard said, suggesting it’s possible that some sort of hybrid legislation could emerge. “My crystal ball is very cloudy at this point.”

Replacing 75 diesel buses results in a lifetime reduction of nitrogen oxide, particulate matter and heat-trapping gases that is equivalent to removing 3,500 cars from the road, according to the Department of Environmental Quality.

Monacella said she was prompted to act when back-of-the-envelope calculations showed that, under Dominion’s proposal, it could take until 2046 to convert the 1,625 school buses that circulate in Fairfax County.

“We have 10 years to drastically reduce greenhouse gas emissions to avoid the worst effects of climate change,” she said about the latest warning from the Intergovernmental Panel on Climate Change. “Locking ourselves into a 15-year lifespan of a diesel bus is insane.”

Tailpipe emissions account for 40% of overall greenhouse gas pollutants in Virginia. Nationally, the transportation sector surpassed the power plant sector on that front several years ago.

“Those students had given us a roadmap for how to get it done,” she said about the electric bus campaign that began in August.

Monacella’s Mothers Out Front chapter began its effort by seeking to green Fairfax County’s school buses. Administrators and the school board were so receptive to the idea that her core group of eight or so members opted to push the endeavor to the state level.