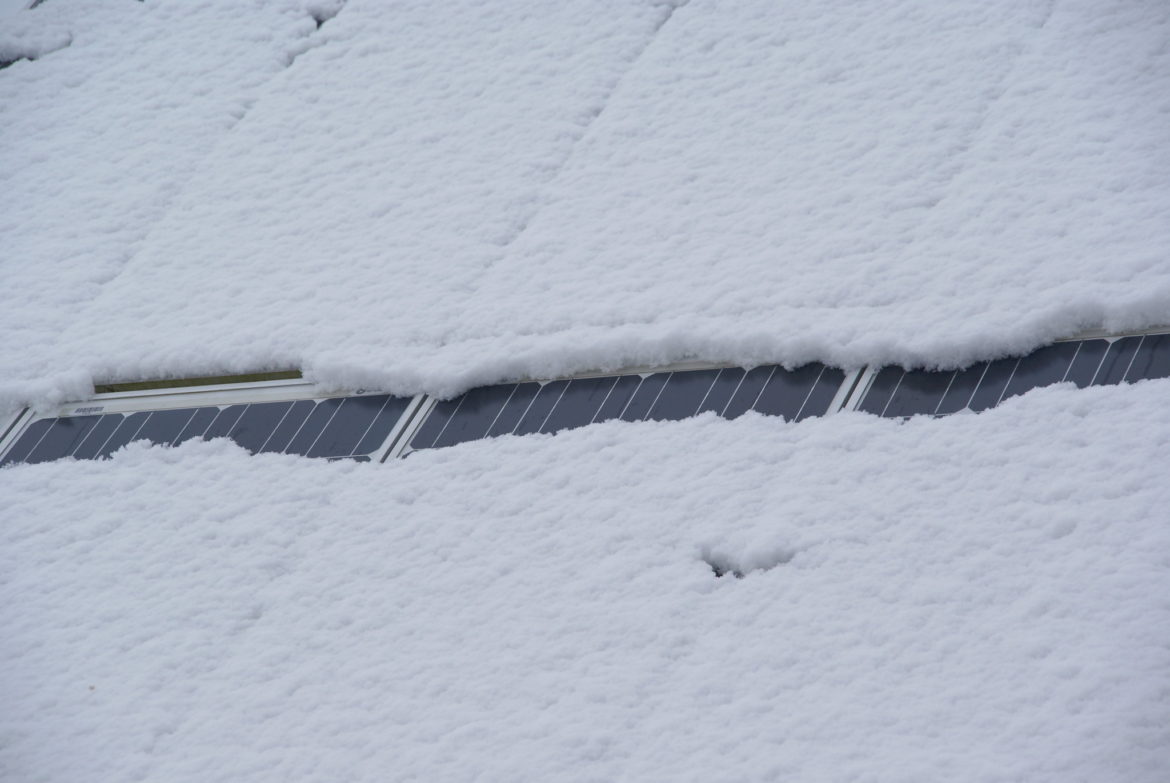 A Minnesota couple is developing a potential solution for snow-covered solar panels: incorporating a heating material that would detect and respond to melt accumulated flakes.

Correction: The Duluth, Minnesota, company working on heated solar panel technology is called Vagner Energy. An earlier version of this story misstated the name of the company.

This story has also been updated to include a comment from Electro Plastics, which manufactures the radiant heating product used in Vagner Energy’s solar concept.

A Minnesota couple’s idea for keeping solar panels clear of snow is gaining traction after winning a $50,000 federal innovation prize.

Solar panels work well in cold weather, but not as well if they are covered even partially by snow. The tilt of panels helps snow slide off, but that doesn’t always clean them. Rakes and other products require solar panel owners to climb on roofs or devote significant staff time to snow removal.

Karl Wagner and Danielle Rhodes noticed snow buildup on the solar panels of their Duluth home last year that cost three days of production. Commercial installations around town appeared to be encrusted with snow for days. Wagner, a data scientist and inventor, developed a potential solution that incorporates into solar panels a heating material with nanotechnology components.

The couple’s “Solar For Snow” proposal was recently chosen as a semi-finalist for the American-Made Solar Prize, receiving $50,000 in prize money. Administered by the National Renewable Energy Laboratory, the contest operates out of the U.S. Department of Energy Solar Energy Technologies Office.

“It was definitely a surprise because there were a lot of great ideas in the competition,” Wagner said. “When I got the email that we were semi-finalist I thought, ‘Did I read that right?’”

Much of the Upper Midwest sees lost solar generation due to snow accumulation on panels, as does another potential market: remote areas of Alaska. Wagner and Rhodes believe applying heat could remove snow from solar arrays over the course of a few hours.

The Solar for Snow team received equipment and mentoring support from Heliene, a Canadian-based solar manufacturer with a factory in Minnesota. The company is interested in seeing the results of the research, Wagner said. Minnesota Power, the utility serving the northern part of the state, also assisted the project.

“It is a good idea,” said Martin Pochtaruk, Heliene’s president. “Now we need to see it being piloted.”

Pochtaruk said such an “add-on” could be incorporated into solar module assembly but only after extensive trials to study power induced degradation of panels and other potential adverse effects, he said.

Wagner concedes the panels will likely cost more and create installation challenges because they need a connection to receive low voltage electricity to activate the nano-material. He wants to continue to try to drop the production cost and to simplify the electrical work required of installers.

Still in the early stages of panel design, Wagner said the nanotechnology would have to last as long as the 25-year warranty most solar panels carry. The modules would have no frames, allowing snow to slide off easily, and have a more durable structure to support high-efficiency equipment, he said.

The size of the market for self-warming panels remains a question since in regions with moderate winters snow generally blows or slips off panels after a few hours. But snow on arrays is enough of a problem that the federal government is studying it, Wagner said. Local Duluth clean energy advocates say the solution could help assuage consumer fears about solar.

“In the north there’s often a huge perception problem about whether or not solar is viable, and the number one thing we have to respond to is, ‘When the panels have snow on them how can the panels be producing electricity?’” said Jodi Slick, CEO of Ecolibrium3, a sustainability advocacy group in Duluth.

Too many people rule out solar in northern Minnesota because of concerns about snow and the region’s severe climate, she said. Heated panels could help increase solar adoption by homeowners and businesses, she added.

The inspiration for heated panels came to Wagner at an energy design expo in Duluth last year, where he met with representatives of a St. Louis-based company that manufactures low-voltage radiant heat for flooring, roofs, gutters, and driveways.

“It’s a nanotechnology that relies on a very low amount of energy to produce a lot of heat,” Rhodes said. “That’s revolutionary.”

The company that makes the radiant heating product, known as StepHeat, said it has fielded similar calls from other companies interested in the potential to warm solar panels.

“These last years we have had multiple requests for melting snow on solar panels and we have been working with different companies to find the best solution to solve this problem by using our heating technology,” said Monica Irgens, president of Electro Plastics, which manufactures StepHeat.

Rhodes said the technology could detect and heat only areas of panels coated by snow. “This material recognizes where there are lower temperatures on the surface and applies heat to those areas,” she said. “That’s the nature of the material. It knows what to do.”

Initially, the couple tested panels with an inch of snow and found heating created small snow avalanches that cleaned panels, Rhodes said. They will experiment with higher snow levels in the future.

Rhodes works as a real estate agent in Duluth and handles business and marketing for Vagner Energy, the company she and Wagner created. Wagner has had a lifelong interest in solar energy and developed the website Museum of Solar Energy to share his knowledge. Items seen in photographs on the online museum’s site are on view now in real life at the Minnesota State Capitol and state Veteran’s Affairs office.

The jack-of-all-trades nature of the couple’s creativity received another award recently, this one from NASA for their concept for growing lettuce in space. “We’re a semi-finalist in that contest, too,” Rhodes said. “It’s been fun.”