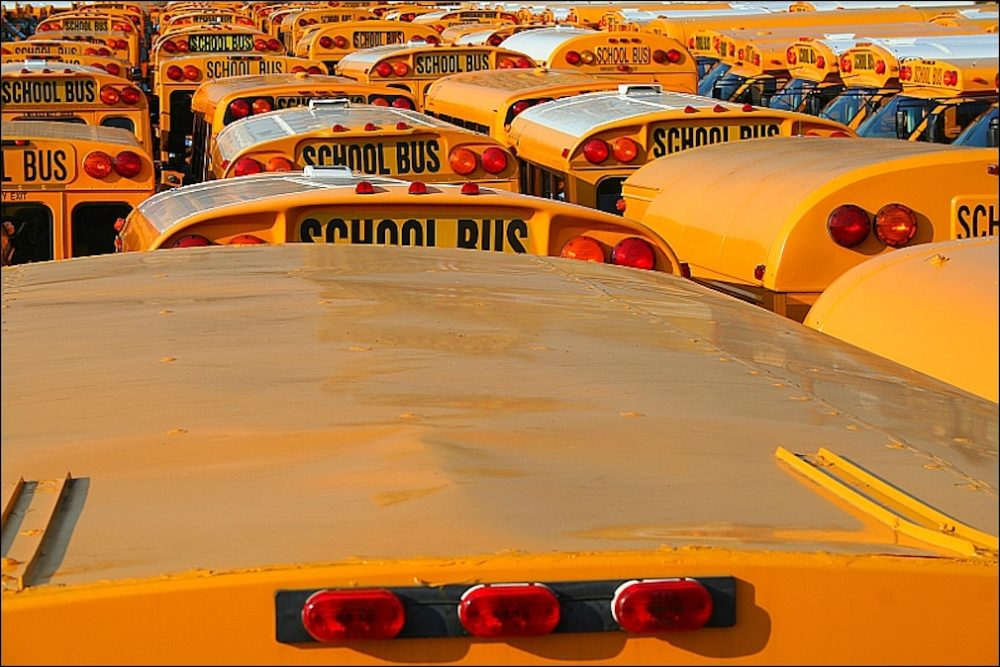 Illinois is proposing to spend more of its VW settlement money on electric school buses than any other state.

Schools are letting out, and that means many yellow buses are headed to storage.

But what if instead of sitting idle for much of the summer, school buses had a seasonal job helping to balance the electric grid?

The state of Illinois is about to test that potential with what environmental groups say could be the start of a transformational investment for both air quality and the electric grid.

The Illinois Environmental Protection Agency is proposing to spend $10.8 million of its Volkswagen settlement money on electric school buses, a larger carve out than any other state.

The plan has been cheered by environmental advocates who say the money will benefit the state’s power grid and public health — especially for kids exposed to exhaust from diesel buses — even as critics in the natural gas industry say it would be more cost effective to invest in propane buses.

She said the money could provide a shot in the arm for electric school buses in Illinois and be enough to bring the buses to several school districts.

As Illinois officials debate how to prepare the grid to transform with electric vehicles, electric school buses present a unique opportunity to strengthen the state’s grid. School buses run on a fixed schedule — children are dropped off at school in the morning and picked up in the afternoon. The rest of the day, buses can be plugged into the grid and serve as batteries.

Aloysius Makalinao, a climate and clean energy fellow for the Natural Resource Defense Council, said that while all electric vehicles offer benefits as grid resources, the case for the buses is unique.

“They can be used as a grid service in times of peaking, especially in the summer when school is out and everyone turns on their air conditioning,” he said.

There are also broad health benefits for children in switching away from diesel buses, which spew nasty exhaust that can accumulate onboard and around nearby schools. The U.S. Environmental Protection Agency says it is a health risk for children, and studies detailing the danger posed by school bus exhaust date back almost 20 years.

“Children whose lungs are still growing process proportionately more air through their lungs than adults. They are more vulnerable to lung damage and will benefit from this dedicated share of money,” he said.

Michelle Hoppe Villegas attended a session at the James Thompson Center Auditorium in Chicago. She described herself as an education advocate and a resident of the Mid-North District of Chicago, where she lives across the street from Abraham Lincoln Elementary School. She said the best way to make an impact with the money is to transition school buses from diesel to electric.

“I can tell you exactly what it is like to be impacted by diesel school buses,” she said. “The cost of living across the street of the school is exposing my kids to diesel buses idling — it is continuous, long-term exposure.”

In 2016, Volkswagen was ordered to pay a total of $14.7 billion after the company admitted that 11 million of its vehicles were equipped with software programmed to cheat emissions tests. A portion of that money — $108.6 million — was allocated to be spent by the state of Illinois, and the state EPA is the agency charged with crafting a spending plan.

In testimony before the Senate Environment and Conservation Committee of the Illinois General Assembly, Alec Messina, director of the Illinois EPA, explained the decision to invest millions in electric school buses came from a push from environmentalists.

He also said that electric school buses start at $300,000 a piece, which would mean the $10.8 million could buy about three dozen buses, excluding the charging stations, and save the state 2.2 tons of NOx emissions annually.

Last fall, a school district in Minnesota was the first in the Midwest to start using an electric school bus, which cost $325,000 but provided $12,000 in annual savings.

Advocates for propane and natural gas argue that the settlement money should be spent on more cost-effective propane buses. Tucker Perkins, chief executive officer of the Propane Education and Research Council, has said that propane powered engines offer the best opportunity to reduce nitrogen oxide emissions at the lowest cost. “The [propane] engine provides the best NOx emissions reduction per dollar spent.”

At least one study by researchers at the University of Delaware found that a fleet of electric school buses with 70-kilowatt on-board chargers could save a suburban school district upwards of $38 million over a typical lifecycle of 14 years.

The Illinois EPA has received at least 1,600 comments and 300 survey responses to its draft plan, and it hosted three public sessions to allow further comment from advocates and residents.

Messina, an appointee of Gov. Bruce Rauner, has said he wants to submit a final plan to the settlement trustee this summer and start funding projects as soon as August, which critics say is rushed in time for the fall election.