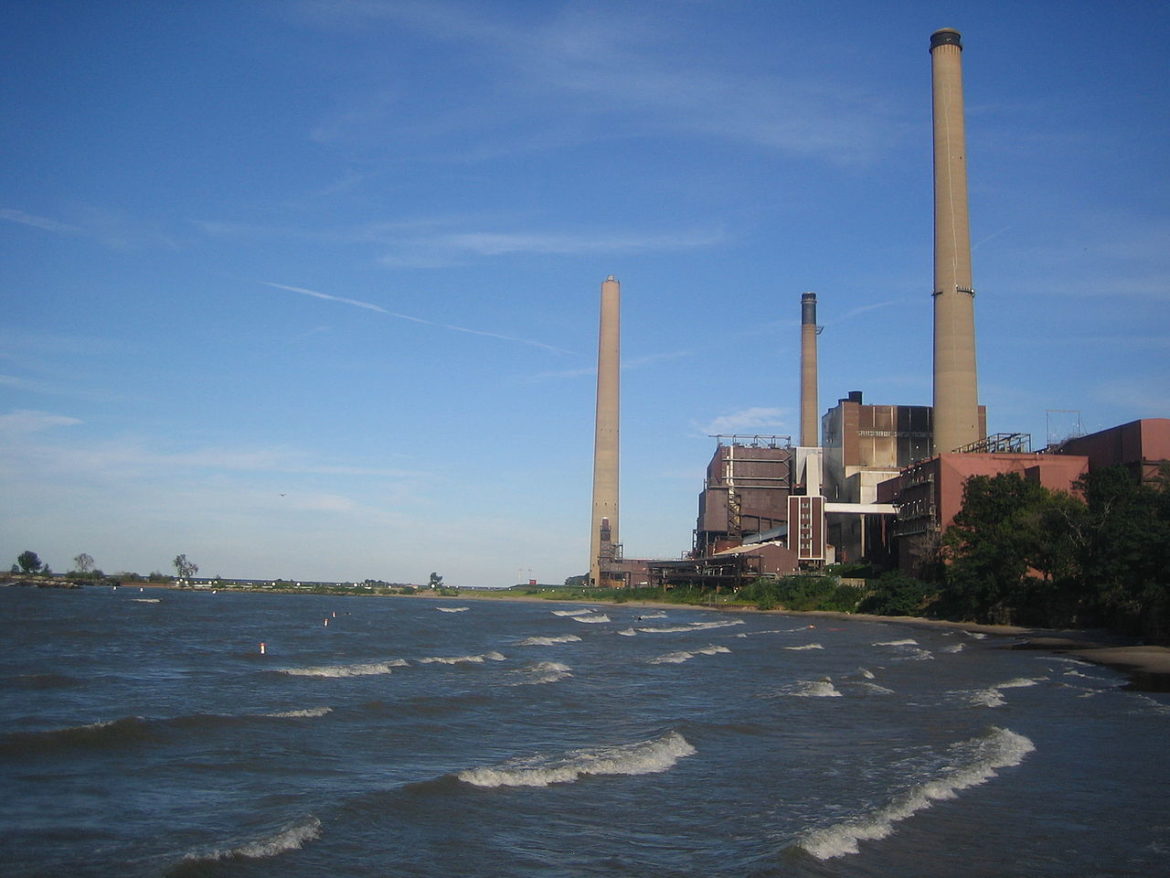 The Avon Lake power plant sits on the shore of Lake Erie in Ohio.

In Ohio, though, legal and regulatory barriers prevent renewables from capitalizing on their economic advantage.

Locally generated solar and wind energy could already replace almost three-fourths of electricity made by U.S. coal plants for less than the cost of continuing to operate those plants, according to an analysis released today by two clean energy research groups.

By 2025, the share of “at risk” coal generation will jump from 74 percent to 86 percent, adds the report by Energy Innovation Policy & Technology in San Francisco and Boulder-based Vibrant Clean Energy.

How do coal plants compare to solar or wind energy in the analysis?

“Very often, even if I gave you that power plant for free, you’d be better off getting somebody to build you a wind or solar farm to replace that energy,” Gimon said.

Why do those figures matter?

The country is already undergoing a crossover in costs between renewables and coal-powered electricity. “Regulators need to start thinking now about how to start replacing all that coal generation,” said report co-author Mike O’Boyle at Energy Innovation. “And policymakers need to start thinking now about transitions for communities that are going to be affected by that pretty rapid transition.”

What costs does the report compare?

A map from the “Coal Cost Crossover” report shows the cost of existing coal-fired power plants compared with building new wind or solar within 35 miles (2018). (click to enlarge) 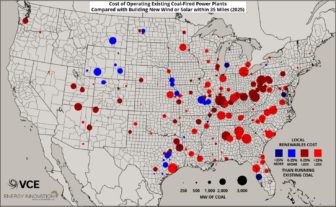 A map from the “Coal Cost Crossover” report shows the cost of existing coal-fired power plants compared with building new wind or solar within 35 miles (2025). (click to enlarge)

The research team compared the marginal costs for existing U.S. coal plants as of 2018 and 2025 with the levelized cost of energy for new solar or wind facilities that might be built within 35 miles of each location.

Marginal costs for a coal plant are the extra expense to make an additional unit of electricity. The levelized cost of entry is the projected per-unit cost for a wind or solar facility over its lifetime, including both capital and operating costs.

How much of Ohio’s coal generation will have trouble competing with renewables in 2025, compared to now?

The report forecasts more than a ninefold jump in the amount of Ohio coal generation whose future costs would be at least 25 percent higher than new solar or wind energy — from 709 MW in 2018 to 6,772 MW in 2025.

Which state will have the most coal generation at risk from renewable energy competition?

Among other Midwestern states, Wisconsin, Michigan and Illinois will have a combined total of more than 20,000 MW of current coal generation that could face significant price competition from renewables by 2025.

What numbers did the researchers use for their analysis?

Were any costs for coal plants left out of the analysis?

The report only considered marginal costs for coal plants, not their overhead costs or debt service for capital improvements. Those omissions actually make coal look more favorable than it really is, O’Boyle said.

Were any benefits for coal plants left out?

The report didn’t add in any value for the timing of when coal plant generation might be available, versus wind or solar energy. Most coal plants “aren’t that responsive anyway,” Gimon said. “So it’s less of a feature than for a gas plant.”

On the flip side, solar facilities generally produce their highest levels of electricity during the summer when demand is high, he noted. Energy storage could also smooth out the variability of renewable resources. And costs for that or other grid services could be offset if cheaper renewable energy was brought in from facilities farther than 35 miles away. Transporting electricity for long distances is fairly standard for Ohio and elsewhere in the PJM territory, as well as other parts of the country.

If coal plants are such a bad deal, why aren’t utilities and other companies just closing them?

In Ohio, it’s partly because regulators have allowed utilities to pass the costs of some uneconomic coal plants on to customers.

In 2011, for example, American Electric Power, FirstEnergy, Dayton Power & Light and Duke Energy extended their obligations to buy electricity from two 1950s-era coal plants, known as the OVEC plants. The Public Utilities Commission of Ohio approved rate plans for AEP, Duke Energy and DP&L’s utilities that let them pass those costs on to all their customers, regardless of whom they chose as their energy supplier.

FirstEnergy’s plan doesn’t have an express pass-through for those two OVEC plants. However its utilities collect an unrestricted credit support rider, which is on appeal. Plus, the bankruptcy proceedings for FirstEnergy’s generation subsidiary could let the parent company avoid its share of those plants’ costs — possibly at other utility consumers’ expense.

But if solar or wind generation is such a good deal, why aren’t utilities building that and passing the costs through to customers?

That depends in large part on state law and politics. Since 1999, Ohio law has called for generation to be a competitive market, separate from distribution.

AEP has proposed using an exception to that law to build 400 MW of solar generation in Appalachian Ohio, which it agreed to do under a partial settlement agreement that led to customer charges for the two OVEC coal plants. The Public Utilities Commission has not yet decided the case.

What about other companies building more renewable facilities in Ohio?

Companies are building solar and wind energy projects in the state. However, ongoing uncertainty over Ohio’s renewable energy standards, regulatory provisions and other policy matters has complicated investors’ analysis of whether to back projects in Ohio versus other states with policies that may be more receptive to clean energy.

Also, in the case of wind, a 2014 law that tripled property line setbacks for commercial wind farm turbines has substantially cut back on most new wind energy in the state that might have been built under the prior law. Efforts to reform the 2014 law have so far been stymied.