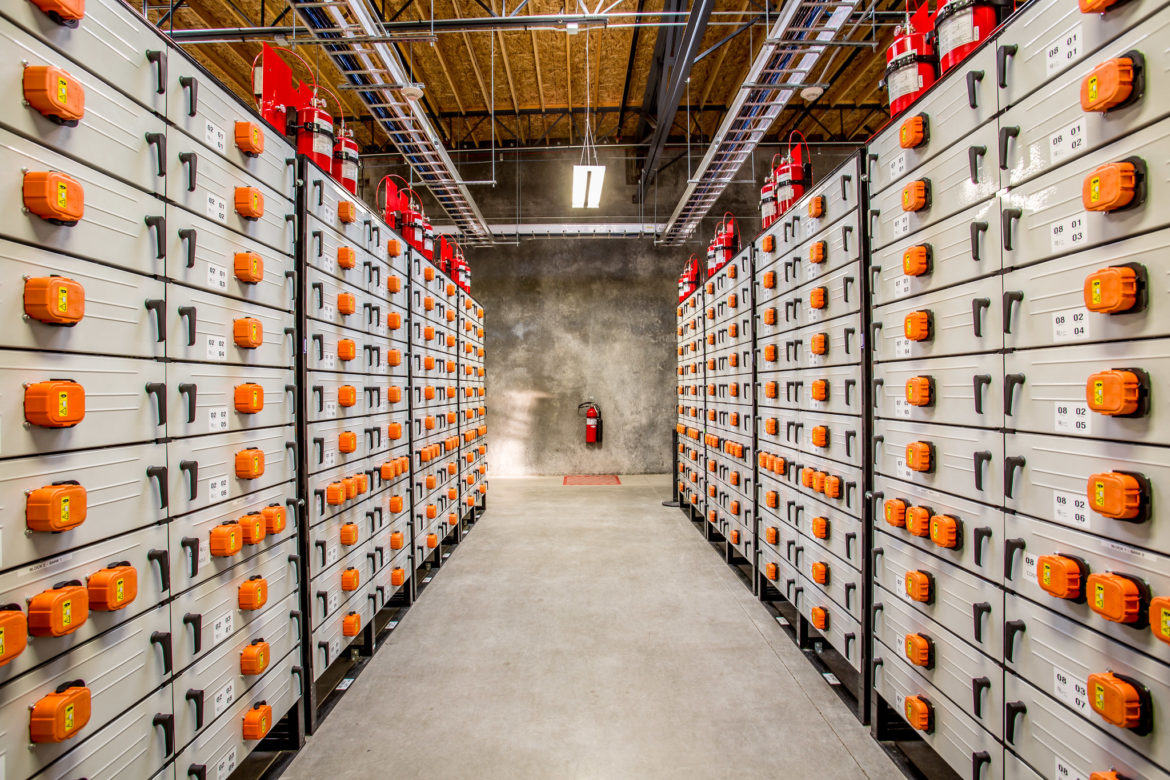 A large-scale energy storage system at Portland General Electric's Salem Smart Power Center in Salem, Oregon. Officials in Iowa are considering a "value of storage" study to determine how storage might benefit customers in the state.

The recommendations are contained in an energy storage report stemming from the state’s 2016 energy plan.

The tax credit is one of several recommendations made in a recent report on energy storage opportunities by the Iowa Economic Development Authority. Others include targeting grant money and conducting additional research, including a “value of storage” analysis.

“We are seeking to move the needle,” said Brian Selinger, who, as the agency’s energy team leader, was involved in developing the Energy Storage Action Plan.

Storage was highlighted in a 2016 state energy plan. State leaders think storage could offer a host of benefits, such as enhancing the productivity of wind and solar, reducing energy costs, enhancing grid reliability, and creating jobs.

The new report suggests tethering a state storage tax credit to a proposed federal tax credit. The Energy Storage Tax Incentive and Deployment Act, introduced in the U.S. House in April, would offer electric storage systems the same 30% investment tax credit now available for solar photovoltaic systems. There is a federal tax credit for storage that meets some specific requirements.

“It’s helpful if we can see that support coming federally first,” Selinger said. “That would send a nice signal. As with solar, then Iowa can say, ‘The federal government has done something; maybe we can layer something on that.’”

Maryland is the only state with a storage tax credit. Several others including New Mexico and Hawaii have discussed it or extended other incentives such as grants, rebates, feed-in tariffs and exemptions from personal property tax, according to James Burwen, vice president of the Energy Storage Association.

Selinger said Iowa officials still need a much better understanding of how storage would work in the state before they would recommend legislation to create the tax credit.

“We don’t have enough information to educate lawmakers on what the need and the impact of the credit would be,” he said. The authority is starting a study “that will dive deeper into the potential benefits, barriers and paths to implementation in Iowa.”

The storage action plan was prepared by a panel of 17 people appointed by the Economic Development Authority. The group draws from the utility and renewable industries, the region’s grid operator, academia and clean energy advocates.

The report envisions some potent uses for storage. Paired with renewables, it could provide backup power for emergency services, as was done in Sterling, Massachusetts. In 2016, that city’s utility began operating a 2-megawatt, 3.9-megawatt-hour battery with a solar array. It can provide 12 days of backup power to the police and fire departments.

Electric vehicle charging stations are another use. Given that vehicle charging could spike cause demand — and demand fees — on-site batteries could level out the need for power and reduce costs. Selinger said the authority also is interested in possible battery-related industries. Although he doesn’t foresee Iowa as a major battery manufacturer, he said it could develop ways to repurpose used energy-storage batteries.

Another of the panel’s recommendations: a “value of storage” study, analogous to the “value of solar” studies that have been conducted in a number of states.

Steve Falck, a senior policy advocate for the Environmental Law & Policy Center and a member of the Iowa storage committee, is especially enthusiastic about calculating a value of storage. A couple of years ago, Massachusetts conducted such a study, based on about 2 megawatts of storage in the state.

“By conducting this study, they were able to monetize the benefits,” Falck said. “That’s what Iowa should be looking at.”

With about 2.5 megawatts of storage in a variety of settings, Falck said Iowa can access the data it needs to determine how storage might benefit the utility, the grid and the customer — with emphasis on the latter.

“We need to make sure the customers are included, so it’s not only a utility or grid benefit, but a customer benefit,” he said.

The Economic Development Authority is currently funding two storage experiments. One involves an Iowa rural electric cooperative that has installed batteries in customers’ homes. The co-op hopes to learn how much benefit the batteries will provide for the customers and the grid, and at what cost.

The other pilot involves batteries being used in conjunction with solar arrays at a university and a manufacturing plant in Fairfield. Ideal Energy, an Iowa solar and storage installer, wants to learn how batteries fit into the larger system, in particular how they can impact peak demand.

Additionally, the state’s largest utility, MidAmerican Energy, in late 2018 installed a 1-megawatt, 4-megawatt-hour battery at a substation in hopes of learning how it impacts peak demand and how it could be used in conjunction with renewable generation.

“The utilities want to … make sure it’s economical,” Selinger said. “They are trying to understand how they’re going to manage the grid and the energy load when distributed generation is coming online. They want to know what’s their value added, economically and environmentally.”

As recommended in the report, the two state agencies that fund energy research — the Economic Development Authority and the Iowa Energy Center — are giving preferential consideration to grant proposals that include a storage component. Applicants are queuing up for funds, which are available in the form of competitive grants and a revolving loan fund.

The report’s authors stress the need for more pilot projects. A lack of experience and understanding is a major obstacle to the growth of storage, Selinger said. “There’s always a concern that things may be too costly. People are concerned about how they are going to operate new technologies on the grid,” he said. “It’s a learning curve.”