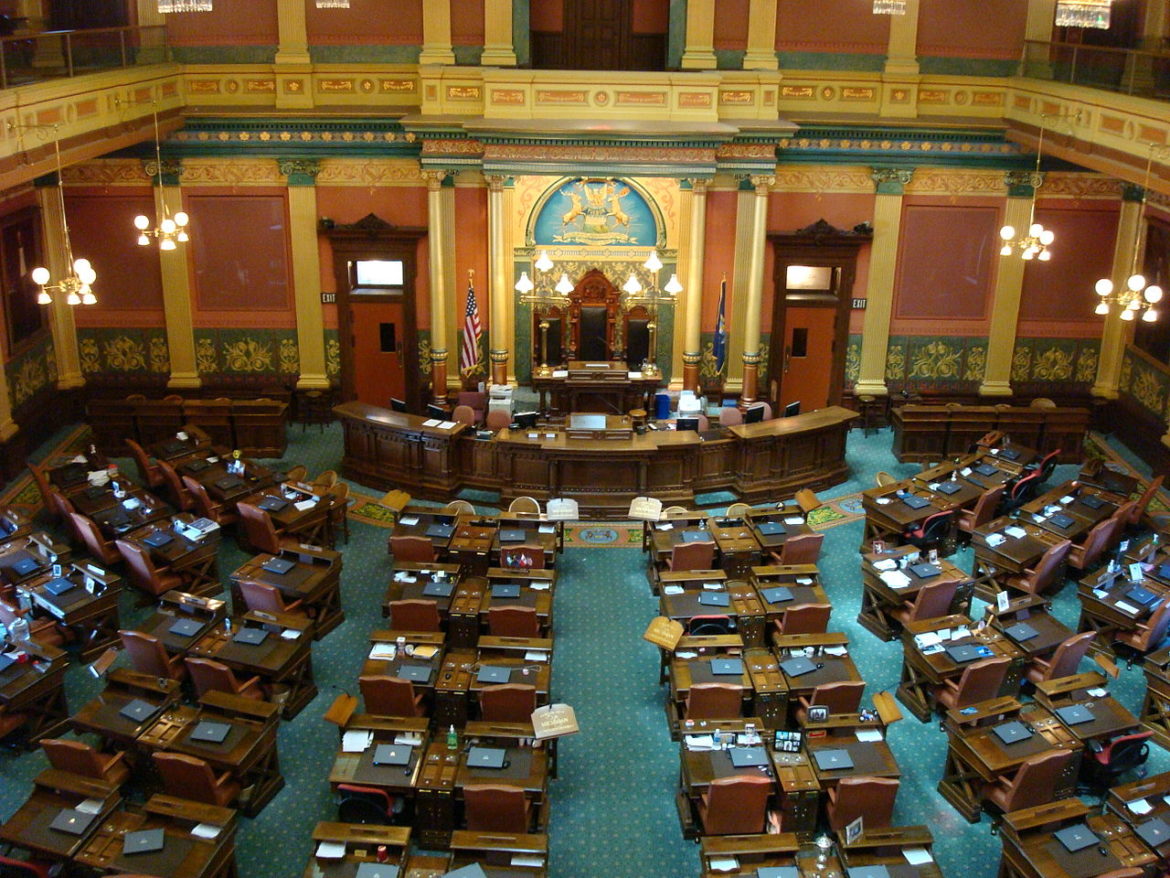 The House Chamber at the Michigan State Capitol in Lansing.

The legislation would prohibit standby fees but allows an “equitable” cost of service charge by utilities.

State Rep. Steven Johnson, a western Michigan Republican in his second term, says his first priority on energy policy is to “look out for ratepayers.”

That’s a driving theme behind his recently sponsored bill to expand the use of microgrids in Michigan. Johnson wants to bring the state up to speed on the emerging technology while allowing utility customers to be more self-sufficient and resilient during outages.

The bill, a component of an “energy freedom” package that failed to advance last session, already faces skepticism from a major utility.

“It’s not my job to look out on behalf of utilities,” said Johnson, who sponsored a similar bill last year. “They might be concerned our legislation hurts their bottom line, but this will be good for ratepayers.”

HB 4477 is the first step in what could be a broader push in Michigan to expand the use of microgrids, which allow utilities or their customers to build distributed generation in a small, closed network able to island itself off from the grid during outages. The bill is cosponsored by three Democrats and two Republicans. Lawmakers have proposed microgrid legislation for at least five years.

Microgrids are relatively uncommon in the Midwest compared to other regions, and generally involve private entities. Consumers Energy has launched pilot microgrid concepts in Jackson and Grand Rapids, though they don’t have islanding capabilities.

Johnson’s bill sets a framework for allowing utilities and private entities to create microgrids for “critical facilities” — such as hospitals, police and fire stations, and correctional facilities — during outages. The microgrids would be able to serve other facilities if they are “electrically contiguous” to critical buildings.

The bill would also prevent utilities from charging building owners standby rates when it’s not in use, calling for specific rates for microgrids that “reflect an equitable cost of service for utility revenue requirement.” The cost of operating the microgrid would not be borne by customers not using.

“We look forward to discussing the merits of the bill with all stakeholders,” said Consumers Energy spokesperson Katelyn Carey. “Our concern regarding House Bill 4477 is that all customers should pay their fair share to ensure reliability and affordability of the electric grid.”

Laura Sherman, president of the Michigan Energy Innovation Business Council, called the bill a “good first step.” She said microgrids would be beneficial for facilities with combined heat and power installations, as well as rural utility customers at the end of distribution systems.

While critical facilities run on backup generators during outages, regulatory barriers prevent those facilities from serving others along the right of way, effectively acting as a utility.

“We have a lot of members who would like to see this expanded,” Sherman said. “It’s about building the right coalition so everyone understands the value and agrees that increasing the opportunity for microgrids beyond critical facilities can bring the same benefits of increased resiliency to other locations.”

Johnson’s bill also calls on the Michigan Public Service Commission to issue a report to the Legislature by July 1, 2020, on the costs and benefits of microgrids.

Michigan Public Service Commission spokesperson Nick Assendelft said microgrids are among “many topics” being considered as commission staff updates statewide interconnection rules. A report is due to the commission in August, and commissioners could move forward on a formal rulemaking process that could involve microgrid standards.

Forum Executive Director Ed Rivet says there is an “enormous amount of detail” that needs to be resolved with the commission and regulations.

“We’re kind of in uncharted territory. This legislation will focus on getting some framework in place and make sense of it,” Rivet said. “It also lets that technology go where it can without utility reluctance.”

Johnson agrees the state should take action as the energy system continues to transform.

“I want to make sure Michigan is poised to embrace technological change and new energy market changes,” Johnson said. “Microgrids are a part of that formula, allowing people to produce power on their own but still be hooked up to the grid.”