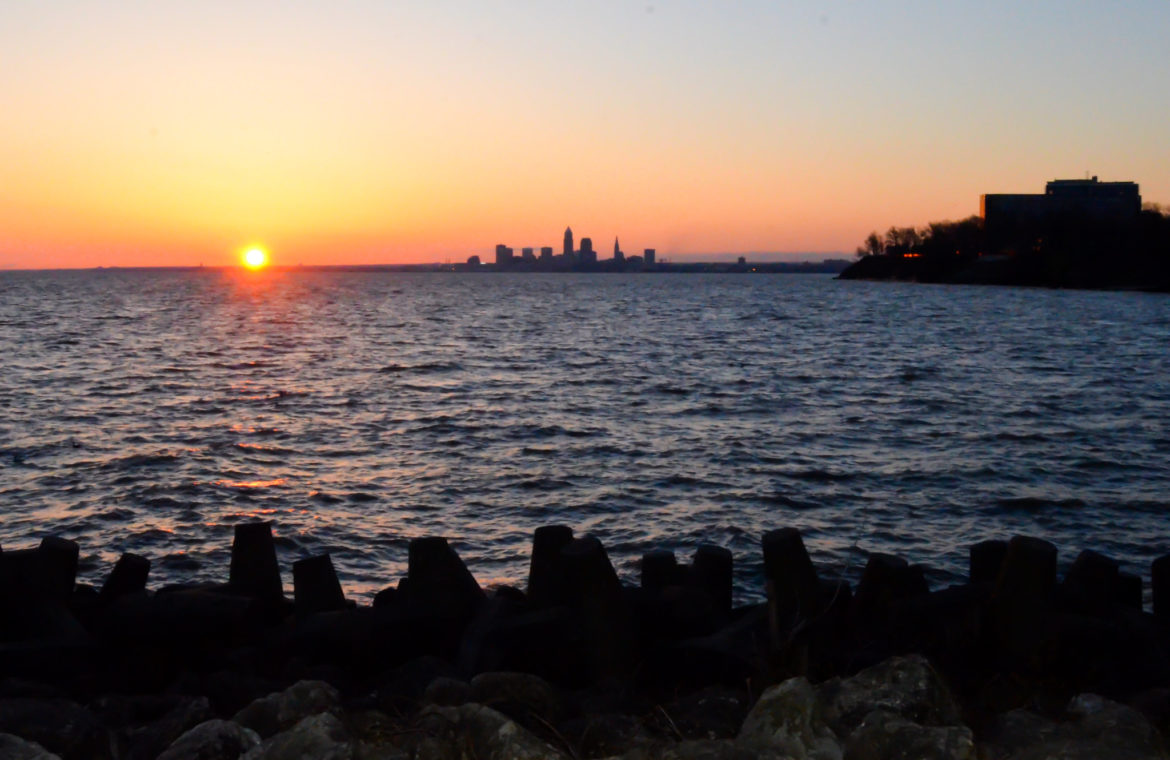 Downtown Cleveland, Ohio, rises on the shore of Lake Erie. A six-turbine wind project 8 to 10 miles northwest of the city would be the first freshwater offshore wind farm in North America.

Two suburban Clevelanders were the lone critics Tuesday of a proposed settlement to allow a Lake Erie offshore wind project to move forward.

Susan Dempsey and Robert Maloney of Bratenahl were represented by John Stock, who has also represented Murray Energy in other proceedings. The coal company has paid expert witness fees in the case, documents show.

The hearing was the first opportunity for testimony on a May 2019 settlement between the Ohio Power Siting Board and the Lake Erie Energy Development Corporation, or LEEDCo. The agreement, among other things, includes extra monitoring for birds, bats and aquatic life before construction.

Stock during cross-examination challenged the ability of Ohio Department of Natural Resources staff to determine wildlife protections in the case. Stock’s firm also prefiled expert testimony of Jeffrey Gosse, a former U.S. Fish and Wildlife Service employee. He objected that the stipulation didn’t spell out all details for radar technology under the agreed-to monitoring plan.

Stock did not respond to a request for comment for this article.

Neither the state nor LEEDCo called for cross-examination of Stock’s expert witness. Ohio Power Siting Board staff has indicated it is satisfied that the settlement meets requirements for approval by the board.

Staff member Stuart Siegfried said the settlement is the product of serious bargaining among capable, knowledgeable parties, and that, as a package, it benefits customers and the public interest. Beyond that, it does not violate any important regulatory principle or practice, his prefiled testimony said.

“We’re excited to be in the final stages of the final major permit that we need to begin construction of the project,” said Dave Karpinski, vice president of operations for LEEDCo.

“The conditions in the joint stipulation, when taken together as a package, help to ensure minimal adverse impact to wildlife,” said Ohio Department of Natural Resources staff member Erin Hazelton in her prefiled testimony.

Among other things, the settlement increases the period for preconstruction monitoring of fish and aquatic life and for radar monitoring for bats and birds. The agreement also clarifies the process for finalization and acceptance of mitigation plans to protect species.

Other provisions clarify what would constitute a significant mortality event for bats and birds and what LEEDCo would do in response to any such events.

Previous work by the Department of Energy and others has found that the project is expected to have mainly minor or negligible short-term environmental impacts. A 2018 settlement with the Ohio Environmental Council, the Sierra Club and others already included multiple provisions to protect wildlife, such as bird-safe lighting and seasonal curtailment of operations.

Briefs on the case are due by Friday, Oct. 11. Any reply briefs will then be due by Nov. 15. After that, the administrative law judges will complete their review, and the next formal action would be a decision from the Ohio Power Siting Board.

If all goes well, construction could start in 2022, Karpinski said.