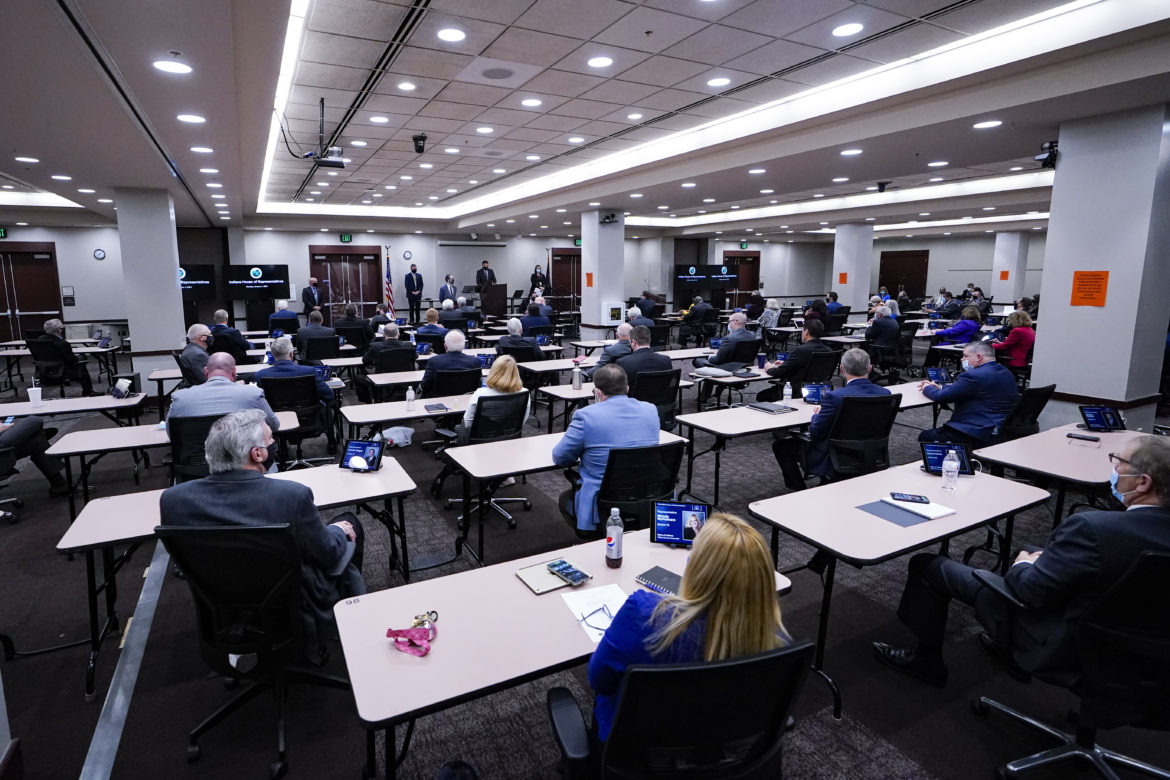 Members of the Indiana House convene in the House chamber in the Indiana Government Center in Indianapolis, Monday, Jan. 4, 2021.

The proposal was attached to legislation to block cities from adopting policies to transition from natural gas heating.

A new element of controversy surfaced in an already contentious debate in the Indiana legislature this week, as an amendment that could limit state-funded universities’ investments in clean energy was added to a bill (HB 1191) regarding electrification of home heating.

On Tuesday, the state’s House utilities and energy committee passed a bill that would prohibit local governments from requiring that new construction not use natural gas for home heating. A number of municipalities in California and the Northeast have passed such measures to promote electrification of home heating, though no such proposals currently exist in Indiana.

The bill passed 9-4 along party lines in the Republican-dominated committee, with an amendment added that potentially restricts state-funded higher education institutions’ clean energy investments. As bill co-author Rep. Jim Pressel explained in Tuesday’s hearing, the measure would mandate that investments in projects like energy-efficient new buildings and electric vehicles be cost-effective, including with a 10-year payback time.

Legislators were confused about the amendment’s contents and the reason for its inclusion, as they made clear in the hearing.

Bill author Rep. Edmond Soliday said the amendment wouldn’t necessarily hamper the construction of individual projects, but it would restrict universities’ boards from adopting policies on clean energy investments. Pressel said that, for example, a university could not decide that all new construction would be built with adobe and windows positioned for maximum sunlight.

Rep. Matt Pierce, a Democrat and critic of the bill, said the amendment would add unnecessary and costly bureaucratic requirements and questioned its origin.

“I’m just trying to figure out which contractor got mad about not getting a contract from a university and decided to come in here and seek relief from the General Assembly,” said Pierce at the hearing. “Where did this amendment come from? Who wanted this amendment?”

“Is there evidence of trustees being fiscally irresponsible in their procurements?” he added.

Pressel said he had no complaints about university spending decisions, but, “times do change, things happen, this is just a little safeguard maybe.”

Pressel and Pierce did not respond to requests for comment.

Kerwin Olson, executive director of the Citizens Action Coalition, said the limits on universities could have significant impacts.

“The bill has dramatically changed in scope” with the amendment, Olson said. “It’s a big mystery, we don’t really know where this amendment is coming from.”

The Citizens Action Coalition also opposes the main part of the bill, noting that it curbs local control and that electrification of home heating is increasingly seen as an effective way to lower greenhouse gas emissions from buildings — which count for a major part of most cities’ carbon footprints.

A study by the Rocky Mountain Institute found that even in cold states that rely heavily on coal for electricity generation—like Indiana—carbon emissions would be reduced and heat would be delivered more efficiently with the electrification of home heating.

The electrification bill is just one of an array of significant energy bills on tap in the Indiana legislature this session.

Bipartisan House and Senate bills would extend net metering, reversing the effects of a controversial 2017 bill that basically eliminated that compensation method. Under the Senate bills (SB 420, SB 249), net metering would continue until July 2027 or when distributed solar reaches 5% penetration (based on summer peak load) in a utility’s territory, whichever comes first. Currently, those benchmarks stand at 2022 and 1.5% of a utility’s summer peak load.

House Bill 1381 meanwhile would set statewide standards regarding siting and operation of commercial wind and solar installations. The bill would create uniform setbacks and decommissioning requirements, plus height restrictions, flicker and sound limits for wind; and regulations about ground cover, fencing and glare for solar.

Olson noted that such bills also raise concerns about impeding local control. And Kharbanda said the Hoosier Environmental Council worries that statewide standards could make it impossible for local governments to mandate pollinator-friendly plants be planted below solar installations, a major priority for the group.

The legislature may also consider restarting a state energy task force that expired in December after issuing a report that left many clean energy and citizens advocates unhappy, as it cautioned against a fast transition to renewables and described a need for coal-fired power.

“Energy Task Force 2.0,” as many call it, would consider issues that advocates have demanded, like electric vehicles, energy efficiency, energy storage, affordable and equitable rates and a just transition for communities dependent on coal.

The previous task force included seven members appointed by the governor and eight split evenly between Democratic and Republican legislators. The bill, like HB 1191, is authored by Soliday.

Olson said his coalition is still “on the fence” about the task force proposal. They are unhappy with the partisan imbalance though encouraged that “most of the topics in the bill up for discussion came from us.”

In all, Olson and other experts say Indiana’s legislative session promises to be an active one on various energy fronts. And he said advocates feel they need to stay vigilant about provisions that may be added to bills as they move forward.

“We have bills that seem to be innocuous but can become vehicles for more stuff,” he said. “They just grow and grow.”