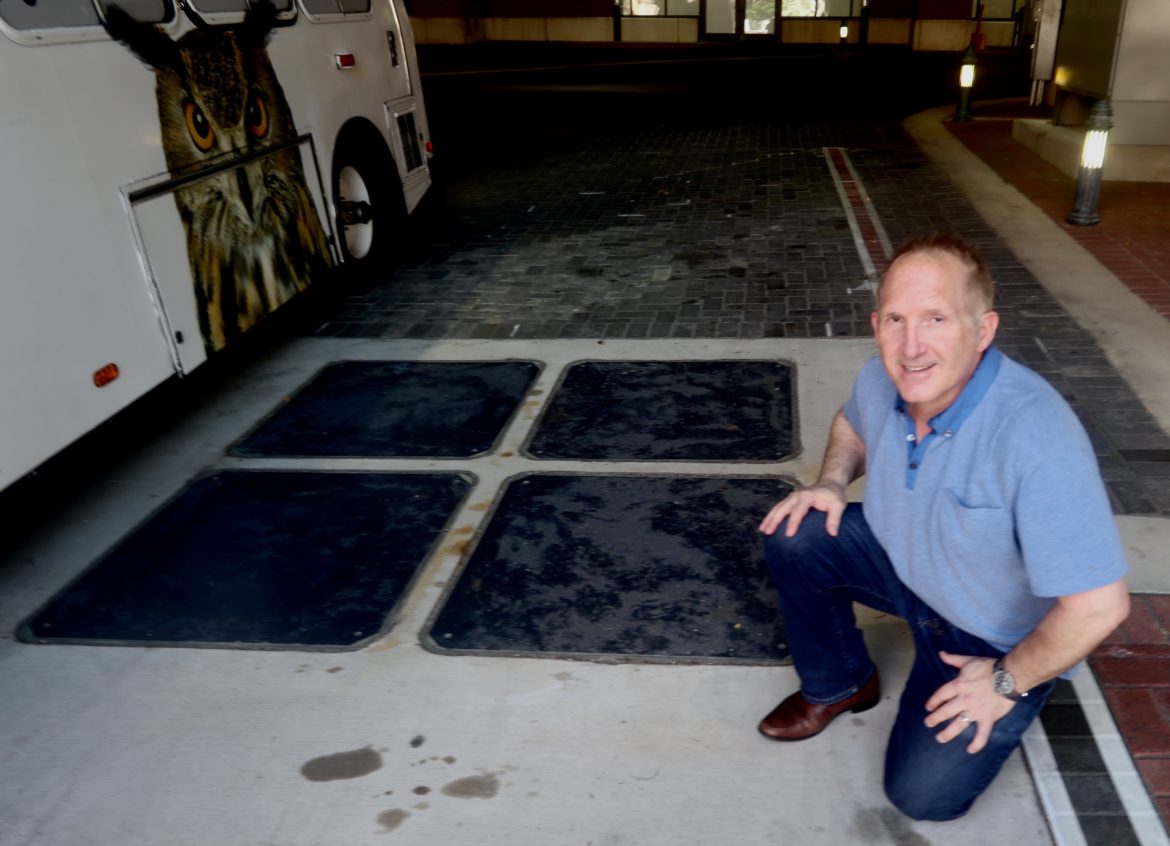 Philip Pugliese is the system planner for the Chattanooga Area Regional Transportation Authority, which paid $400,000 for its induction bus charging station.

The city is among the first to install inductive charging stations to power an electric bus fleet.

CHATTANOOGA, Tenn. — The newest piece of public transportation infrastructure in this Tennessee River city isn’t nearly as famous as Cincinnati Southern Railroad’s “Chattanooga Choo-Choo,” the train between the north and the south that picked up its first passengers here in 1880.

It isn’t as colorful or sleek as its fleet of electric buses that began operating in 1992, before almost any other American city, and for a time was the largest in the United States. It’s much less attractive than Chattanooga’s 55 electric bicycles that are available to commuters at racks and charging stations across the city.

No, the latest innovation in this mid-size southern city, renowned for early adoption of high technology infrastructure, is a small grid embedded in the pavement at the Chattanooga Area Regional Transportation Authority’s downtown bus station along Market Street. Though the design is barely more interesting than a manhole cover, the four squares mark the spot where Chattanooga spent $400,000 to install a wireless “inductive” charging station last summer for its new fleet of electric fixed-route buses that went into service in March.

With financing from a $761,000 Energy Department grant, and the expertise of big data and artificial intelligence experts from Vanderbilt University and the University of Houston, the transit agency is studying the value of the charging technology to power what it anticipates will be a fully electric bus fleet, perhaps by 2030.

“How we move into more electric vehicles means we’ll have to get better in understanding charge dynamics,” said Philip Pugliese, the transit agency’s system planner. “We’re figuring that out right now. Do we need more remote charging stations like this one? Will battery technology get so good that buses won’t need to be charged while on their routes? Historically CARTA had been engaged in research projects associated with inductive charging and this project was seen as an extension of that research.”

The charging station was developed by Momentum Dynamics, a Pennsylvania company that installed the country’s first inductive electric bus charging station, a 50-kilowatt unit, in Howard County, Maryland, in 2017. The company also built a 200-kilowatt unit like Chattanooga’s last year in Wenatchee, Washington. Chattanooga’s is the nation’s third such application for a public transit system.

The units use coils installed below ground, powered by electricity, to generate an electromagnetic field. Separate coils on the underside of buses absorb the energy, excite electrons, and convert the energy to electricity that is stored in bus batteries.

The coils deploy the same inductive electrical principles that are now used to charge cell phones. The magnetic field is confined to the space between the charging unit and the underbelly of the bus. The charging unit, which is safe to walk over, is nevertheless powerful enough to entirely recharge a bus in an hour or so. By scheduling buses to stop for a few minutes above the charging station, the transit agency can add power to bus batteries and miles to the range of their electric buses.

Just how far heavy-duty electric transit buses can travel on their battery charges has been one of the impediments limiting their adoption by American transit agencies. A typical bus is called upon to travel 150 miles or more in a day. BYD, one of the dozens of companies manufacturing electric buses, insists its equipment easily meets that requirement. “Range anxiety” though, has touched a number of agencies where electric buses faltered as winter weather, desert summer heat, or steep hills have caused batteries to weaken.

In a prominent case that arose last year, Albuquerque instituted a hold on an order for BYD to build 20 electric buses that missed by 100 miles the 275-mile range the city contracted and the company promised. Batteries overheated in the summer, according to city officials. The bus company, the world’s largest electric bus manufacturer, said it was intent on solving the problem.

The Albuquerque situation is a setback for electrifying public transit. Another impediment is the cost of the buses — typically $150,000 to $200,000 more than a $550,000 diesel bus. For agencies battling tight capital budgets, spending that much more for a bus is a reach.

Depending on which data to cite, between 300 and 500 electric buses are in operation across the country in a score of transit systems. Roughly an equal number of electric buses are on order. Agencies in New York and California lead the pack. In contrast, Shenzhen, a city of about 12 million residents in southeast China’s Pearl River Delta, has 16,000 electric buses — its entire fleet.

Chattanooga is among America’s biggest electric bus supporters. The city’s electric buses are clean, quiet, reliable and durable, Pugliese said. Three new BYD buses glide so quietly on city streets, the only sound they make is the friction of tires on pavement. Pugliese said they are performing well since being put into service in March. The agency is considering buying three more.

With 17 electric buses in service, 14 of them operating on a free downtown circulator route, Chattanooga operates one of the country’s largest electric bus fleets. Drivers are training to use the new charging station, and the transit agency is studying how to incorporate the charging technology into scheduling routes to gain the most efficiency in its electric vehicles. CARTA also is undertaking a comprehensive review of its bus routes that will lead to the first significant schedule and route changes in 40 years.

“We want to predict accurately how much energy a vehicle consumes at any point along its route to make the system more efficient,” said Abhishek Dubey, a professor of computer science and computer engineering. He leads a four-person team at Vanderbilt University that is amassing and analyzing data for CARTA collected from sensors installed on 17 electric and 77 other vehicles in the agency’s bus fleet.

The city’s decision to invest heavily in electric vehicles is part of Chattanooga’s overall strategy of embracing technology to strengthen its economy and quality of life. In 2010, the city’s electric utility installed an ultra-high-speed, 10-gigabit-per-second broadband network to attract and assist high-tech startups in becoming mature, homegrown companies. Three years ago, local developers built the Edney Innovation Center, a downtown startup incubator and business developer for the technology sector down the block from the new charging station. Over a dozen entrepreneurial internet, information technology, design and app development companies, owned and managed by young entrepreneurs, have offices and desks at the center.

Fast internet and the Edney Innovation Center helped generate over $700 million in new downtown retail, office and residential construction, according to River City Company, an economic development nonprofit organization. Chattanooga, set alongside the Tennessee River in a magnificent and steep Appalachian valley, long ago shed its reputation as one of America’s most polluted places. The city’s population, now over 179,000, is home to 10,000 more residents since 2010. Volkswagen opened a mammoth assembly plant in Chattanooga in 2011 that will build the carmaker’s new electric vehicles.

CARTA serves 3 million riders a year. A third of them use the system’s most popular route — the downtown electric bus circulator. “Balancing on-route performance, charging time, and minimizing electric demand charges are all factors which will be considered in our evaluation of the charging unit,” Pugliese said. “It’s an important opportunity to contribute to the industry knowledge base.”